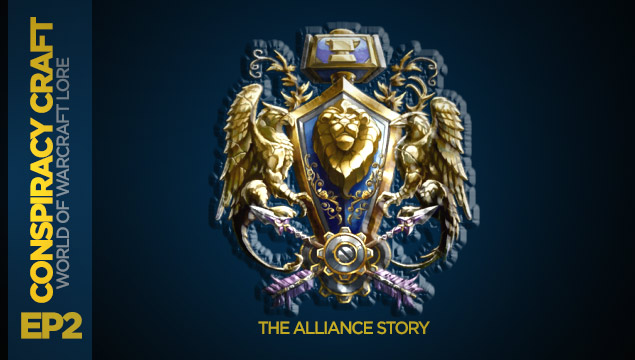 This week on Conspiracy Craft, we run down the Alliance story and their part in the Darkspear Rebellion! “Why U No Like Alliance, Blizzard?”

Conspiracy Craft is GAMEBREAKER’s World of Warcraft show that focuses on just the story and possible avenues that Blizzard‘s development team could take with it. This week’s big dilemma is lack of story or even story telling for the Alliance! But first, let’s take a small trip to Mists of Pandaria’s launch.

The launch of Mists of Pandaria had a great ramp up for the upcoming conflict between Horde and Alliance in the Jade forest. A naval battle took place off Pandaria’s shore, but the Horde picked the wrong ship to fire upon–it was carrying the crowned prince. Furious over the danger or possible death of his son, King Varian Wrynn charges Alliance heroes to venture through the mists to find Prince Anduin Wrynn. But the Horde was there as well to see what untapped resources could aid them in the upcoming war.

Both factions rally locals to join their ranks and fight for their sides. In the end, it leads to a spectacular battle in the very heart of the Jade Forest at the Serpent’s Heart. A true sense of the Orc vs Human nostalgia as their feud cracks the statue and released…  the Sha. Back to helping Pandaren.

Patch 5.1 Landfall was a valiant attempt to revive the conflict. While it was current, Horde was ordered to kill Alliance, Alliance was ordered to kill Horde, but only if you did those dailies. And as your reputation with both factions grew, you were charged by key NPCs to help with the war effort.

While Horde went off to find a weapon to use against the Alliance, the Alliance was just tagging behind to see what the Horde was doing and heroes had to babysit Prince Anduin as he tried to find a way to counter Warchief Garrosh Hellscream’s plot. And yet, no one knew what King Varian was doing until Jaina Proudmoore had enough with Sunreavers, showing the hairline fractures in the unity of the Alliance as a whole. The end of Landfall was a huge potential for an all out clash to take place in Patch 5.2.

But back to helping Pandaren. Patch 5.2 Thunderking was more of a personal war between Sunreavers and the Jaina’s Kirin Tor. Regeant Lord Lor’themar Theron is seeking a weapon to ensure he has an upper hand against Garrosh while Jaina is simply seeking revenge against Archmage Aethas Sunreaver, who was rescued by the Horde heroes. Not much of a prelude to Patch 5.3.

Currently, on PTR, Patch 5.3 doesn’t offer much reasoning for just why the Alliance would want to help the Horde with their rebellion. Blizzard is aware of this issue and is working on amending the lack of “why” for the Alliance to give their aid.

How should the development team fix this lack of Alliance story? Do you agree with my analysis? Send your questions in to submit@gamebreaker.tv for the next Conspiracy Craft!