Conspiracy Craft ep 3: Dawn Of The Aspects Blows Your Mind 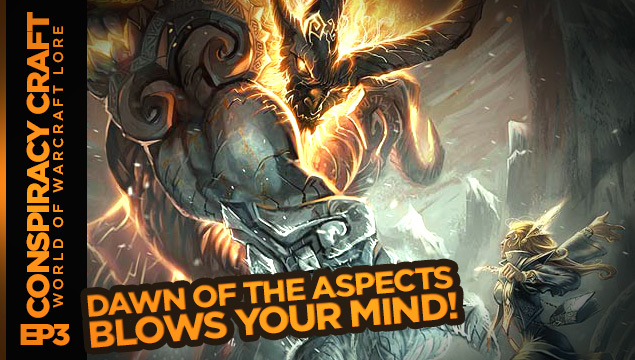 This week in Conspiracy Craft, we play connect the dots between several of Azeroth’s big baddies of World of Warcraft lore! Grab the tinfoil!

Conspiracy Craft is GAMEBREAKER’s World of Warcraft show that focuses on the story and possible avenues that Blizzard‘s development team could take with it. This week I look for some hidden links between all of Azeroth’s baddies that will blow your mind!

The Burning Legion is big, bad demons that leave destruction as they journey across the universe. They are the boogeymen to magic users of Azeroth and reportedly, they are drawn to the planet for its abundant magic source, but for whatever reason, they could not easily tromp through. It was during Queen Azshara’s reign over the Kaldori that one particular demon was able to tempt her with unspeakable power–Sargeras.

Sargeras was once the defender of the universe and Champion of the Pantheon, the Titans, he waged a never ending war against an evil which caused him to go into a brooding depression–an abnormal behavior for a titan. He started to question the vision of an ordered universe and openly confronted some of his fellow Titans. But they were resolute in their beliefs and he left their ranks forever. Soon after, he freed the very demons he had imprisoned in the Twisting Nether and started the Burning Legion.

This is where the story crosses. In the RTS, originally the Eredar had been the cause of Sargeras’s questioning madness. He had simply been a footnote in the history of Azeroth and of minor importance. But when The Burning Crusade announced that the Draenei would be a new playable race, the lore team had to rewrite that section of the story. The Draenei were once part of the Eredar race, but when Sargeras came to their world to recruit commanders of his Burning Legion, they took up a new name as their home-world burned. Which leaves open the question, what could have corrupted a titan?

Everyone is familiar with the original Lich King, Ner’zhul. He was an Orc from Draenor who had been tricked by the Burning Legion, Kil’jaeden, to enslave his people in a blood pact. After he discovered the deceit, he wasn’t much of an activist during the Dark Portal’s construction. It was his apprentice, Gul’dan, who lead the first Human and Orc conflict, the First War. Later, Gul’dan died trying to retrieve an item of power from the Tomb of Sargeras.

Ner’Zhul was pushed back into action to reopen the portal to retrieve several artifacts from Azeroth, one including the skull of his former apprentice. But Gul’dan was just as powerful after his death and fueled his master’s thirst for power. This power ripped Draenor apart into the Outlands as he tried to escape the Burning Legion, but he failed to avoid the grasp of Kil’jaeden. His body was torn apart, his spirit cast into the ice of Northrend. Blizzard says that his mental powers and magical abilities were what started his control over the Scourge, but Dawn of the Aspects by Richard A. Knaak might hint to something else entirely?

Galakrond was a very large proto-dragon before the Aspects were even Aspects and is referred as the father of dragons. Strangely, he began to start eating his own kind, the smaller proto-dragons, and this caused a mutation within him. He stank of death and he would sometimes regurgitate the other protos which were also infected with undeath. Also, he was able to control the undead very similarly to the Lich King. This has lead me to believe that the root of the Undeath Plague started with Galakrond. So when he was slain in Dragonblight, there was nowhere for his power to go and so it waited in the snow and ice until Ner’Zhul showed up. Since the last parts of Dawn of the Aspects haven’t been released at this time, I have a theory that the Old Gods were whispering to him and influenced his craving for the flesh of his own kind.

Old Gods! Seriously, it all connects! Think I’m a little crazy with my connections or do you think evil shouldn’t have a singular root? Send your questions in to submit@gamebreaker.tv for the next Conspiracy Craft!