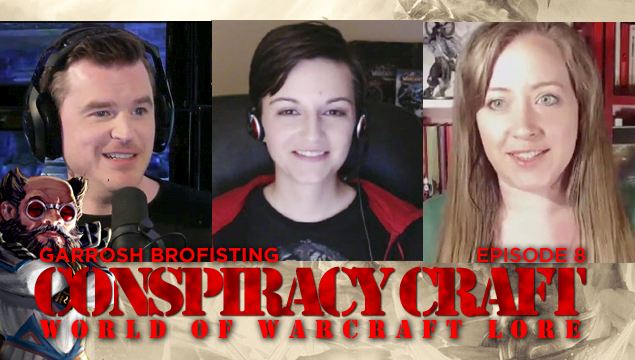 This week on Conspiracy Craft, part 2 of Garrosh and the possibility of him surviving the Siege of Orgrimmar!

Conspiracy Craft is GAMEBREAKER’s World of Warcraft show that focuses on the story and possible avenues that Blizzard‘s development team could take with it. We left you hanging on the edge of your seats for two weeks with the open question about Garrosh Hellscream surviving the Siege of Orgrimmar in Episode 7: Young Garrosh Hellscream. This week, we take a look at some of those “what if” avenues.

For those of you who missed out, here’s a quick recap on Garrosh’s life up to Mists of Pandaria. Players first meet the young orc during the Burning Crusades in Nagrand. He’s a complete emo kid, down on his luck. He was one of the sick kids, told he was weak for it, told he should die, his father, Grommash Hellscream, is called a betrayer, and he’s worried he’ll just be like his father. Along comes Thrall to cheer him up, let him know his father wasn’t all that bad and invites him back to Orgrimmar. Garrosh is the commanding officer of the Northrend expedition against the scourge, does some things to disappoint Thrall, and eventually becomes Warchief of the Horde.

I personally don’t see Garrosh getting any form of redemption at the end of the Siege of Orgrimmar. It’s too cliche with repeating his father’s history and the fact that he feels he is doing what is right for his people, the orcs. All he’s known is warmongering and nothing else. I would like to see him get away so he can grow into a stronger and badder villain for the future–more like the Mogu story in Pandaria.

This was a theory I came up with during the Patch 5.2 Public Test Realm for Throne of Thunder. After completing a lot of Patch 5.1 quests in Landfall, both factions at some point gave a nod to Garrosh being similar to the Mogu traits. And Garrosh himself moderately approved of the Mogu history. Both thirsted for power, both were warmongering, and had a desire for absolute conquest. But that isn’t plausible. There is no way now that the Pandaren would let Garrosh back on their lands after what he did to the Vale of Eternal Blossoms. And with Patch 5.4, the players are saying farewell to the land in mists. Fleeing to Pandaria is off the table.

We can’t forget about the Mogu’s former allies, the Zandalari. I had again, toyed with the idea that maybe he could catch a ride with them somewhere and aid them in their desire for conquest. But if you hadn’t noticed, there’s a whole tribe of trolls camping outside the Orgrimmar walls. Not to mention that Garrosh is a bit racist. He’s an orc purist with his group of orcs brofisting-circle-jerking crowd. Orc proud! There’s no way Garrosh would stomach lowering himself to lead a bunch of trolls.

And though he could probably still bum a ride with the Zandalari to anywhere in Azeroth, he wouldn’t be able to hide for long. No, there is one place many have forgotten that you can always return to: home. And home for Garrosh is in the Outlands.

Are you seeing where I’m going with this yet? With Garrosh having nowhere to really go in Azeroth, it’s clear that his last option is back through the Dark Portal to Outlands. But he can’t go home, home. Josh Allen aka Lore mentioned on Legendary, before he was working for Blizzard, how there could be more to Outlands just floating just beyond sight.

And if you look at a few maps of Draenor from the RTS days of Warcraft, we see the basic formation of what we know of Outlands. But we see an ocean, so it’s possible there is more beyond the nether. Garrosh could go to any number of places with players hot on the pursuit. And after a taste of the power an Old God can give, he could be looking for more.

For all we know, Old Gods could have already been or are in the process of being present on Outlands. The Arakkoa, Sethekk, were attempting to summon one in Shadowmoon Valley. There may have been plenty of time for them to have tried again and even else where.

But with any good villain development, they need time. And while players are on his tail, there has to be a distraction that could benefit Garrosh. And that would be when players could run into the hidden force of the Burning Legion tucked away on a different part of Outlands giving Garrosh his chance to get away and the perfect prologue for the next Burning Legion expansion. (Drops the mic.)