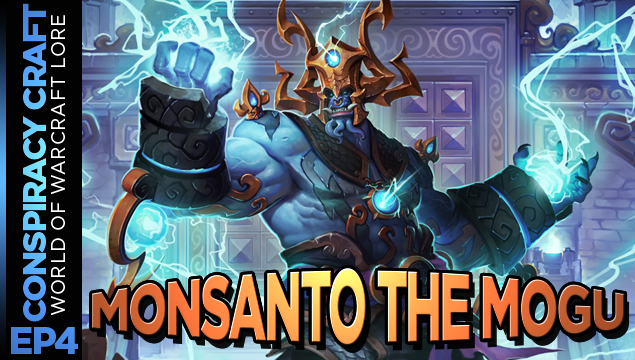 This week in Conspiracy Craft, the Mogu are showing their Monsanto side as we clear up their Warcraft lore discrepancies!

Conspiracy Craft is GAMEBREAKER’s World of Warcraft show that focuses on the story and possible avenues that Blizzard‘s development team could take with it. How is the Mogu related to Monsanto? Time to clear up the air about the lore surround the Mogu! And if you’re asking about their allies, the Zandalari, it’s already been covered in my first Conspiracy Craft article!

There’s a bit of a discrepancy about the Mogu’s origins. According to the Pandaren, they were brutes who just stumbled upon the magical powers that were in the Vale of Eternal Blossom. But when Patch 5.2 was released, we discovered that they were in fact titan constructs who were exposed to the Old God’s Curse of Flesh. Definitely go check out the Lorewalker story “Gods and Monsters” that is discovered on the Isle of Thunder!

It’s official. The Mogu are Titan Constructs like the Earthen, Mechagnomes, Tol’vir, Vrykul, and several other races. But the Curse of Flesh and the shadow of Y’Shaarj didn’t agree with their original protection programming. Suddenly they had emotions and strong desire to fight that seemed similar to the orcs’ bloodlust. With no outlet or a strong hand to control them, they turned on each other as their master, Ra-Den, grew silent.

Someone had to take control and like our human bias behavior, stronger Mogu took command of like-minded Mogu and formed warclans. It was during the Age of a Hundred Kings that Lei Shen, the Thunder King, was born. Yes, born. Raiders are familiar with two or three known female Mogu, making their appearance either a rarity or an anomaly.

See, the Curse of Flesh affected all the Titan made creations differently. The majority of them lost their stone skin for flesh but the Earthen turned Dwarf, Mechagnome turned Gnome, Tol’vir lost their wings, Vrykul produced smaller babies that started the Human race, etc. And if you notice, most of Titan creations are primarily male in appearance.

It’s time to go back to movie/book knowledge! Remember Jurassic Park and how they spliced dinosaur DNA with a frog species. Some frog species can easily change genders to preserve the species, so this might be why Earthen and Mechagnome eventually had females emerge. Since the Mogu weren’t part of the life seed program, it’s possible something went wrong with fleshy genetic makeup and females were few and far between–make Lei Shen even more special.

But since this is Azeroth and there is magic, being born of magic is possible. Not to mention that adulthood is marked differently between all the different races of Azeroth. It’s possible that after so many years, Lei Shen was finally deemed an adult by Mogu standards much like how gnomes are still teenagers in their 20s.

The stories of the Mogus’ former glory were probably told to all little Mogu Pups and Lei Shen might have heard them all. He knew about their silent master, heard how they pushed the Old Gods into prisons, keeping Azeroth safe. And after enough generations had passed, his mind was developed enough to find a way to rally the clans together once more.

This is where the story gets a little complicated. In the Lorewalker scroll “Gods and Monsters,” it states that Lei Shen went into the heart of the Thundering Mountain–now the Isle of Thunder. But in the Dungeon Journal, it says he went deep into the Mogu’shan Vaults. Sean Copeland at Blizzard was nice enough to answer my tweet to clear it all up! 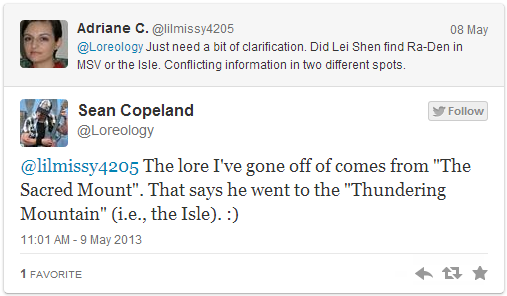 So he journeys into the heart of this Sacred Mount where Ra-Den is sleeping and decides to wake him up. A majority of you might roll out of bed fighting–I know I do. Mogu verse Titan Watcher, Servant fighting master, the victory claims the heart of a “god.” With this brutal act, he earns the respect of all other Mogu. He unites the currency and language of Pandaria, enslaves the other races, builds a giant wall, a vault, and his own palace with the labor of slaves, leaving quite the legacy behind upon his death.

But he is called to battle once more by the Zandalari and their voodoo up in Kun-Lai Summit where they resurrect him to take over Pandaria once more. At least for the duration of Patch 5.2 before Wrathion tempts heroes with shiny legendaries to bring him the Thunder King’s heart. So anticlimactic!

Did I explain away some of the faults in the Mogu lore? I red-shirt’ed it hard, but I want to read about some of your thoughts on the discrepancies with the Mogu. Leave them in the comments below. Send your questions in to submit@gamebreaker.tv for the next Conspiracy Craft!

And a special thanks to Solarflair from Convert to Raid for the topic tip!