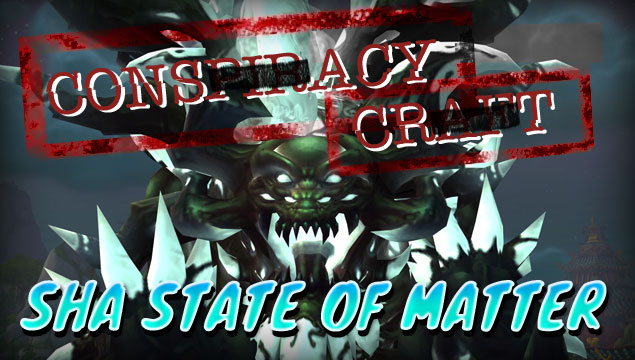 Time to reach back in your memory to your Science lessons! Check out the theory on just why the Sha were “missing” during the Mogu Empire!

The Sha were a large impact at the launch of World of Warcraft: Mists of Pandaria. Their bonds were broken with the uncontrolled emotions rolling between the Horde and Alliance. We are familiar with them having a physical form that can be smacked, cut, and ultimately killed by players. But where were they during the Mogu reign?

There are no records of them causing their chaos to Pandaria until the last Pandaren emperor, Shaohao, goes on his grand quest to protect his people and his land from the Sundering. I have a theory on why there isn’t much of a presence felt by the Sha soon after Y’Shaarj exhaled his last terrible breath upon Azeroth. Call it far-fetched or be amazed with my latest conspiracy.

In my article about Y’Shaarj, we learned that he cursed the lands of Pandaria with the Sha. They were the shadows he left behind and mere whispers of his former glory, according to the Klaxxi. But breath and shadow do not have a physical form that can be easily fought against. Much like the air around us, I believe that during the thousands of years that the Mogu ruled the other denizens, the Sha were actually in a gaseous state of matter. You might be questioning me now, but bear with me!

Go back to your early grade school days when you were in Science class and you were taught about the four fundamental states of matter. While shadows cannot be considered part of this, we’ll use the breath idea. Breath is a gas. It has no definitive form because the space between molecules is larger compared to the other states. They’re moving rapidly with weak to almost no bonds. Hard to defeat smoke with weaponry. It certainly doesn’t bleed or die.

With this idea, I picture the Sha as a mist that could have seeped up from the ground or rolled from the heavens. Their shadow would invoke the strong, negative emotions in the people who were cast in their darkness, much like Zhu’s Watch. It would cause massive chaos across Pandaria before departing again, but only in Pandaria due to their life-tie to Y’Shaarj.

Magic and logic must exist side-by-side.

So how do I think the Sha finally obtain their lovely, physical forms? Well, a scientific explanation certainly won’t work for a fantasy game, so let’s throw a dash of magic in this mix! And it involves how Shaohao sought enlightenment to save Pandaria.

Pandaria is a land of creation with mystical waters reminiscent to the Well of Eternity at its heart. I believe that when the Highbornes were doing their summoning rituals at the Well of Eternity to bring the Burning Legion into Azeroth, it stirred something unknown within Pandaria. After all, the Emperor had consulted a Jinyu, known to see visions through the water, who saw the Sundering that was to rip Kalimdor into different landmasses.

With his mission set by the Jade Serpent, the last Pandaren Emperor began his journey to protect his people and the lands. Now to shed his negative energies, he had to focus on them each individually (though hatred, anger, and violence are pretty hard to separate singularly). That focus created a pressure upon the different Sha and in each turn it helped to manifest them into a solid state of matter! And with the aid of the magic seeping from across the continent through the waters, the Sha could be locked away.

But what about the seventh Sha, Pride? Since Shaohao never truly confronted it, it remained in its gaseous state. And it was with Pride, which in the end consumed him, that the last Emperor cloaked his lands in the Mists. When he shed his earthly body, he became a part of it, and it became the Mists that protected Pandaria. And in turn, it protected Y’Shaarj–tying it all back to the defense protocol of the Sha theory. No physical form for the one Sha that could be mistaken for good.

And with no form to hack and slash, the last Sha could very well still be out in Pandaria, bidding its time beneath the ground. Continuing the protocol and keeping its master alive even with what could befall him with Patch 5.3. That singular Sha could be the undoing after Azeroth heroes leave Pandaria’s soil.

What do you think about my crazy theory of the Sha and their physical form manifestation? Where do you think the Sha were during the reign of the Mogu Empire?