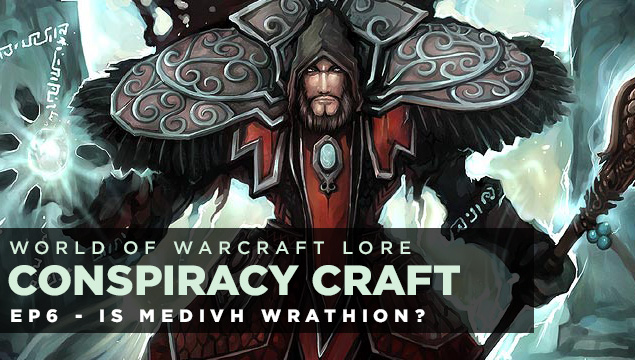 This week on Conspiracy Craft, we take a second look at the Wrathion and Medivh connection!

Conspiracy Craft is GAMEBREAKER’s World of Warcraft show that focuses on the story and possible avenues that Blizzard‘s development team could take with it.  The last episode left viewers with plenty of questions about the Wrathion and Medivh connect, so we take a second look and give another possible theory that will blow your mind!

Mary Sue Med’an, No One Likes You

You heard me right! I do NOT like Med’an! Not one bit. But since people were asking why Medivh might not have gone to his son about the doom soon to befall Azeroth, I had to talk about him.

Why is he a Mary Sue? A “Mary Sue” is judged [as] a poorly developed character, too perfect and lacking in realism to be interesting. And Med’an fits that rather perfectly. Now let me turn around three times and spit like I used to do when I did theatre when Macbeth was mentioned.

Where In Azeroth is Med’an?

Well, that is precisely the point. No one knows where he’s gone off to since he was bestowed with Guardian powers. He could be anywhere on Azeroth, in Outlands, or a completely different plane for all we know. And if no one knows where he is, it’s possible his father doesn’t either, especially if he is outside of Azeroth.

Being dead has its limitations after all. And Medivh is a very special sort of dead who isn’t sentimentally attached to anything except perhaps his guilt of bringing harm to Azeroth. So that leaves Med’an out of the picture.

Thank you, viewers, for your posts on the forums about the other two key characters in Warcraft history, Malfurion and Tyrande. It was an excellent point that they could still have been called upon by Medivh about Azeroth. There’s just a few issues. Malfurion has been asleep for most of World of Warcraft. His mate has been pinning away for him until he awoke an expansion ago. And Night Elves don’t really like magic.

Not ruling either one of them out completely, but much like Thrall and Jaina, they’re busy with their own things. There’s that trace of the Nightmare in the Emerald Dreams. A lot of domestic catching up to do. Or even something else that Blizzard hasn’t revealed yet.

With Medivh’s mother, Aegwynn dead, there’s no one else on Azeroth to make him a new form. Which leaves this oddly and uniquely created little egg in Badlands. A little egg spliced from many different black dragon parts to be purified. It’s possible that something created outside of the Vale, Un’Goro, and Scholozar might not have the spark of life inside.

So what if Medivh just decided to be “born again” with Wrathion? Crazier things have happened in Azeroth, but leave your thoughts in the comments below. Also send your questions in to submit@gamebreaker.tv for the next Conspiracy Craft!