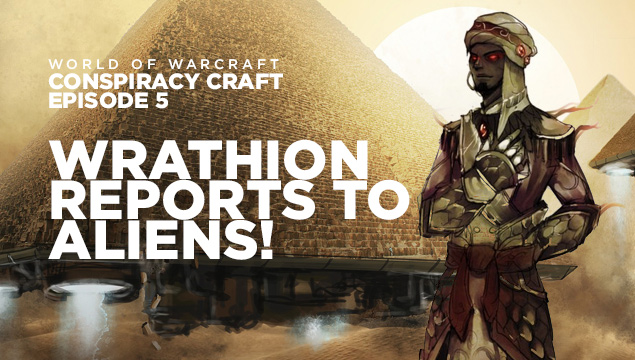 This week on Conspiracy Craft, aliens! Seriously, the plotline for Wrathion is confusing and creepy, but he might have help from the past!

Conspiracy Craft is GAMEBREAKER’s World of Warcraft show that focuses on the story and possible avenues that Blizzard‘s development team could take with it. This week, the Conspiracy crew takes a look at Wrathion and try to figure out just why he seems so familiar!

The conception of Wrathion starts with the primary questline in the re-vamped zone Badlands. I highly suggest you experience this quest for yourself to get the full impact. Be prepared for spoilers (though you’re about an expansion behind). Rhea wants you to help her with her experiences on obtaining a purified black dragon egg, which are hard to find!

The corruption of Deathwing runs deep within all other black dragons starting at conception. So it’s time to tinker around with Titan devices! Thankfully, Uldaman is nearby to do just that for the players and lo’ a purified black dragon egg was spliced together–never to be seen again.

That is until the egg is stolen from the tender care of the red dragons in the Twilight Highlands and it is up to the very skilled of the rogue class to retrieve the egg back! But the egg was no longer an egg and a highly intelligent dragon in human-form was willing to make a deal, if you worked for him.

All you have to do is kill off Wrathion’s corrupted family members for a chance at not one, but two shiny, orange carrot legendaries! And naturally, you commit genocide to acquire them. Soon after the demise of his father, Wrathion takes off for a land that has been shrouded in mists.

But it seems big key characters might not be willing to believe the doomsayer of Azeroth. Sounds familiar, doesn’t it?

It should be since we’ve experienced this before with Medivh back during Warcraft’s RTS era. In fact, he tried to warn as many as he could about the impending doom for Azeroth, but only two listened to him. If I was Medivh, I would probably be a little upset that not many were willing to hear me out the first time.

But he’s been gone since that time, but has he been forgotten? I have a theory that connects the two!

What if Wrathion isn’t on his own with his concerns of Azeroth? What if Medivh has found someone new he can share his concerns with? Wrathion and Medivh. A very interesting connection that might require further inquiry!

Think I’m a little crazy with my connection? Would you want to see these two dynamic characters working together? Send your questions in to submit@gamebreaker.tv for the next Conspiracy Craft!