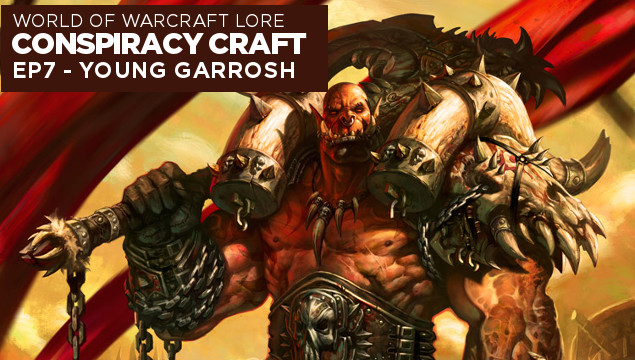 This week on Conspiracy Craft: Garrosh Hellscream Has Daddy Issues.

Conspiracy Craft is GAMEBREAKER’s World of Warcraft show that focuses on the story and possible avenues that Blizzard‘s development team could take with it. This week, we take a look at Garrosh Hellscream before he makes his big boss debut in patch 5.4. Missy goes all the way back to Nagrand to see who Garrosh was and how that lead him to be warchief of the Horde and ultimately a threat to Azeroth itself.

The orcs didn’t start off as genocidal monsters (hey, since Missy isn’t writing this article, I can bash the horde all I want. Alliance Prevails!) They used to be a nature-loving community of tribes. Then the whole betrayal set in convincing the orcs to leave their shamanistic ways, embrace the warlocks, piss on their ancestors, and drink the blood of a Burning Legion pit lord. How it seemed like a good idea to swallow the insides of a giant hoofed multi-dimensional demon, I’m not sure. But it happened, and all the orcs involved went green.

Well, not all the orcs turned green. There was a group that didn’t end up getting corrupted…because they were sick. A Red Pox outbreak caused some orcs to be quarantined to a camp in Nagrand, where they stayed while everyone else went off to “take over Azeroth.” Garrosh Hellscream was among the kids that were left behind. When Kargath Bladefist paid a visit to recruit for the 2nd war, Garosh asked about his father, Grom. Instead of answering, Bladefist declared the entire group to be weak and asked that they do the rest of the orcs a favor and die. To top it all off, Greatmother Geyah told Garrosh that his dad had damned the entire orc race by being the first to consume the blood of Mannoroth. That was the point that Garrosh started wearing eye makeup, retreating to his room by himself and listening to The Cure’s greatest hits on loop.

And Along Came Thrall

I guess it’s ironic that the guy who saved us all from Deathwing after the Cataclysm is the one who brought us our next big threat. He convinced Garrosh Hellscream to cheer up after telling him that Grom Hellscream turned out to be a hero in the end and that he needed to buck up because he had a lot to live up to. Then Thrall took him to Orgrimar and eventually gave him the job as Warchief so he could go head back to Nagrand and “meditate” with Agra.

So What Made Garrosh Go Bad?

Every villain needs something that pushes him over the edge. Garrosh Hellscream has two. First there was the contemptuous Krenna who loudly disagreed with Thrall’s decision to languish in Duratar when the lush Ashenvale was so ready to be taken. She demanded conquest, and that stuck with Garrosh. The second thing that swayed his mind happened after the brawl with Varian in Dalaran. Thrall turned to him and said, “You disappoint me.”

Even after the disappointment, Thrall still appointed Garrosh as Warchief when he needed to go away. It wasn’t a popular choice, to be sure. He barely tolerates the “lesser races” of the Horde and wants the orcs to have a stronger foothold in Azeroth. He is looking for a tool to secure the future that he believes the orcs are entitled to. A mana bomb suited his purposes as first, but now he needs something…bigger.

Pride. Garrosh Hellscream has been manipulated for most of his life by pride. A simple compliment can pull him out of depression or drive him to challenge his superiors. His father once willingly took the blood of Mannoroth for strength and bloodlust to defeat his foes. Now Garrosh takes the power of the old gods and uses it as a weapon and armor for the same purpose.

Garrosh wasn’t corrupted. He chose his own path.