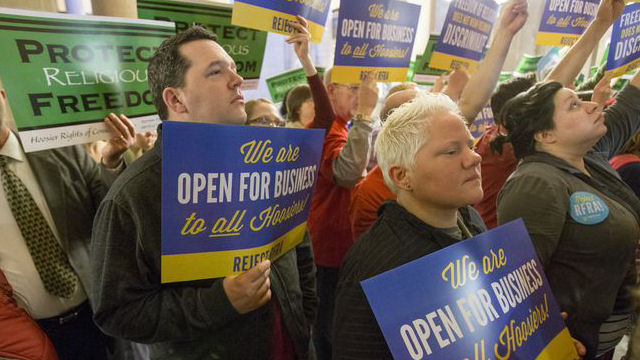 As a resident of Indiana for over 25 years, I’ve watched my hometown grow into a prospective, booming city and seen the slow progression of equal rights at a state level. However, it seems that the state has taken several steps back by passing the Religious Freedom Restoration Act (RFRA).

Indiana is the very first state among 20 others to officially pass the state version of the Religious Freedom Restoration Act (Senate Bill 101). This act was originally passed in the 1990s while President Bill Clinton was still in office. The general bases of the federal act was to protect American citizens from the government that may go against their religious choice–to further enforce the Bill of Rights First Amendment.

But if I remember my Government course from high school, laws, bills, and acts from the state should take precedent above federal. So Indiana and the 19 other states are working on their own Religious Freedom Restoration Act to protect at the state level to give a general legal standard while ten other states have adjusted it into their constitutions.

Here is where it is a bit grey on potential discrimination. Basically, those whose business is structured on religious followings can deny services if an action may cause them to go against their following. The obvious issue is with wedding clergy, florists, bakers, caterers, photographers, organizers, etc. who run their own, small business and may be approached by a same-sex couple.

And Indiana Governor Mike Pence signed this bill aware of what Section 9 entails. He explained in his statement:

This bill is not about discrimination, and if I thought it legalized discrimination in any way in Indiana, I would have vetoed it. In fact, it does not even apply to disputes between private parties unless government action is involved. For more than twenty years, the federal Religious Freedom Restoration Act has never undermined our nation’s anti-discrimination laws, and it will not in Indiana.

And the federal RFRA has never undermined the nations anti-discrimination laws for the last twenty years, but that’s because no where does it have such a point as Section 9. So long as that section of Indiana SB 101 is attached, visitors are going to be concerned about the waning “Hoosier Hospitality” over the coming years which could have a colossal affect with future conventions.

Gen Con is one of the largest tabletop-game conventions of North America for almost 50 years. While its roots are found in Wisconsin, it has called Indianapolis, Indiana home since 2003. Last year alone, Gen Con has 56,000 attendees from 40 different countries and all 50 states of the United States.

These attendees have different cultures, beliefs, ethnicity, sexual orientations, gender identities, and socio-economic backgrounds. And Gen Con has been a place that is welcome to all since the diverse audience is what makes the convention. They are the key to its success.

Before the RFRA was signed by Governor Pence, Gen Con CEO Adrian Swartout sent an open letter to him on their and their convention go-er’s regard on the bill. She expressed that if the RFRA was signed, they would be forced to look outside of Indiana for future conventions since the bill may have a negative impact with attendance.

Gen Con alone provides an estimated $50 million in revenue for the state of Indiana. That’s more than Superbowl XLVI in 2012, which was actually an expense loss for the state. And Gen Con will take their 56,000 and $50 million and go elsewhere.

Unfortunately, Gen Con recently re-signed a contract with the city of Indianapolis for another five years. It’s honorable to uphold the remaining contract, but the convention will suffer quite a loss over the next five years. Many well known names are even upset over the recent bill, which could put a damper on guests for conventions in Indiana.

CEO Swartout is still hopeful as many of the local business community was against the RFRA being passed. In an open letter to attendees:

[…] we believe that Gen Con attendees not only will receive the same great service and hospitality of 2015, but an even warmer response from the city. For as long as we stay in Indianapolis, we will stand shoulder-to-shoulder with this community, expand our effort to bring more diversity to Gen Con, and welcome all.

But they urge that if any feel uncomfortable to go with their gut instinct. Those who do attend should share any positive or negative feedback of local hospitality during Gen Con. Their will be a feedback form for attendees prior of 2015 to compare at the annual employee summit.

The RFRA could lead to a decrease in tourism and business for Indiana due to Section 9. Since the Indiana House of Representative is majority Republican, it will be difficult to sway the minds and amend out the discrimination regardless of local outcry.

Combating against such a repulsive bill, a new organization has arisen in the wake of all the RFRAs in process in other states. Open for Service is campaign for business opposed to discrimination of any kind.

Already local businesses are sharing photos of their OFS stickers located on their front doors. Those visiting Indiana should be looking for those blue stickers to get the best in Hoosier Hospitality.