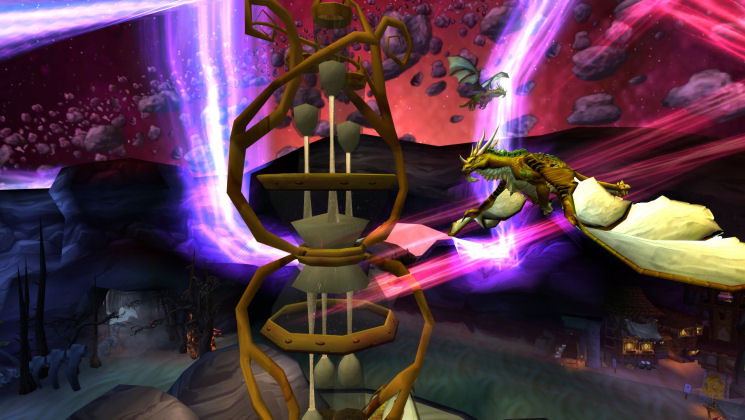 Conspiracy Craft clears the confusion on how and when Warlords of Draenor happens. Journey from pre-launch to the final boss of the next World of Warcraft expansion.

The next World of Warcraft expansion has finally been announced at BlizzCon. The dust has settled after the whirlwind of news, but this wind devil has left chaos in its wake. Never fear, Conspiracy Craft will do its best to bring order, but leave you with a mind blowing revelation that was left out of the big announcements for Warlords of Draenor.

When the development team stated that Garrosh Hellscream would go back to the most pivotal moment of Orcish history, naturally several players were up in arms–including myself. The idea that changing history, having father-son meet, impacting it with key characters, much like in War of the Ancients with Krasus and Rhonin, caused a lot of apprehension.

And it was a natural conclusion to draw, but time in Warcraft has never worked that way. The multiple timeways are primarily associated with Azeroth. But it is possible due to the Dark Portal that that way of time could be connected to Draenor. And although the Titans had visited Draenor, they didn’t toy with it to the extent of Azeroth. So the weird, multiple timeways are still possible without the Portal. But how do multiple timeways work?

Doctor Who fans will be familiar with a reference to the “Rose and Ten” parallel universe without the negatives. But for those who don’t, I’ll try my best to explain. Time in World of Warcraft is more like the making of the rings of Saturn. Together, they make a beautiful sight but you can still distinguish each ring on its own. That’s because they are different in composition, in speed. That is how I see time in Warcraft.

Time rarely flows in a perfect order and it certainly isn’t a single line for Azeroth,even if there is one true timeline. This was illustrated quite well in War of the Ancients when every single Nozdromus of each parallel time was trapped in place at one time across all of them–his form layered.

And we’ve ventured into other lines at the request of the Bronze Flight. Hillsbrad, the Black Morass, Hyjal, and Stratholme, players journeyed “back in time” to preserve the time ways from the Infinite Flight. But the Well of Eternity was the first time we tampered with it.

I’m still of the belief that with the first act of stealing the Demon Soul from the past the Aspect of Time is heading towards his Infinite future. But I digress. What we do know is that Garrosh will be getting help from a possible rogue Bronze.

Currently, Garrosh is rotting in whatever cage the Pandaren have rigged up. With the power of Y’Shaarj gone “Garrosh is just an Orc, not too scary.” Brilliant still, but just an Orc.

“Garrosh has a new friend who has a unique ability to bend time.” (Metzen; BlizzCon 2013)

And as stated, we know that he will be aided in his escape by a rogue Bronze. But the question has been asked on how we would be clued in that he has escaped and where to look for him?

There’s three possibilities that I can foresee: someone witnesses his escape and he is tracked to Draenor, the Iron Horde will be pouring out of the now red Dark Portal, or we get a summons by a little Gnome: Chromie. The second idea could be quite the epic encounter.

The Iron Horde en masse outside of Stormwind and Orgrimmar gates (Stormwind most likely since it is on the same continent as the Dark Portal). Players would push them back from the cities walls and back through the Portal much like the Second War. It would be at the epic scale of the Scourge Invasion for Wrath of the Lich King. It would be the exact reason for the Alliance to go on the offensive. 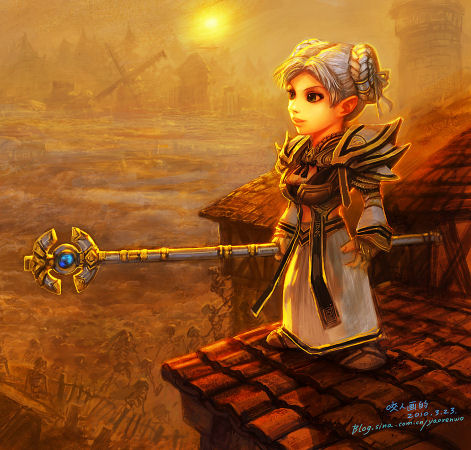 “The timeways appear to be in flux! It may have to do with when the Dragon Soul was seized–” (Chromie;Dawn of the Aspects)

However, the last possibility is the most plausible. I believe that we will be seeing more of Chromie this expansion. She’s the best neutral character to convince both factions about what Garrosh is doing and a call to stop him. (We don’t know if Jaina Proudmoore will be going, but if she does, well, there’s the reason for Alliance to want to stop the Horde before they are Horde.) With Chromie playing the advocate, she would be the perfect counter.

But what about the rest of the expansion? We know the Ogres will be playing a role in Draenor. As we help out the different clans with them, we’ll be losing others to the Iron Horde way of life. We will probably also have some dealings with the vicious flying-Arakkoa and their Gods. Gul’dan will be the outcast of the Orcs having willingly allied himself with the Burning Legion and a mess of demons. (No Troll patch.) But the primary focus will be stopping the Iron Horde from crossing and in the end we have the guy behind the guy to face and “fix” the time connection issue.

Metzen did state on how the more astute followers would be able to conclude the final boss of Warlords of Draenor. It only took me a few days to finally sit and think through everything we’ve done in Pandaria and what was said at BlizzCon, but I think I figured it out. And I dropped this timebomb at the conclusion of BlizzCon and GAMEBREAKER’s Legendary recording on who it would be.

Let’s remember that the primary issue we have as players will be staring at us “red in the face” at the start of Warlords. Our timeway, the true one, will have been connected to a corrupted one. And we have to eventually figure out how to cut the tie.

That’s what got me thinking on how to fix the red Dark Portal. Usually, to stop or fix whatever impending doom is threatening Azeroth, we generally go after the source. But where does it all start?

We know Garrosh couldn’t get to Draenor without some help. Time travel is beyond mortal power. So it seems that his new friend is the primary source. But which of the Bronze is to blame?

“His little friend has been ‘given’ the task of aligning it to our time.” (Metzen; BlizzCon 2013)

On thinking back, this entire expansion idea was foreshadowed in the newest location. The Timeless Isle was set outside of time, stagnant in the ebb and flow. There we met Kairozdormu. We aid him in building his own hourglass, the Vision of Time. Through this we sought out visions of what was, what could be, and what will be. The final vision showed the most gruesome sight.

And there we got a glimpse of this “would be” killer. It was a familiar figure we’d been interacting with since the Timeless Isle appeared on the horizon, Kairozdormu. Upon reporting our finds, he asks us to remain silent to see how the future would pan out and we foolishly obey.

We see the future of the very villain we will have to take down in Warlords of Draenor and do nothing. And because of our inaction, we have set the ball rolling for the future Infinite Flight.