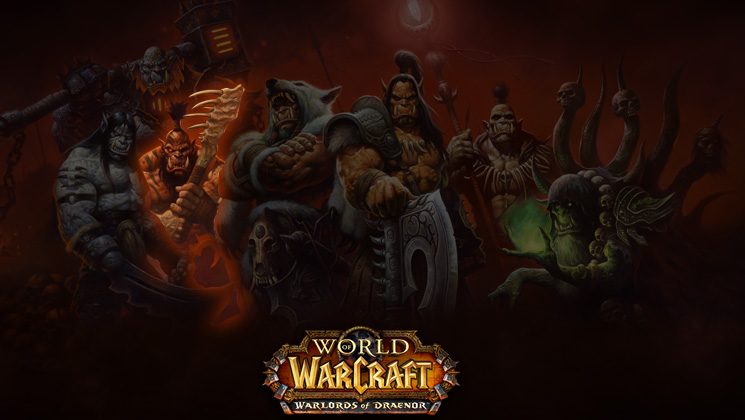 The Horde is comprised of many different clans of Orcs, unique in their way of life. These individual clans were not always unified and filled with the bloodlust. Before the manipulation of Kil’jaeden, the Orcs were independent and only came together twice a year to honor the equinox of Draenor called the Kosh’harg. The clans were vastly different from each other with various cultures, dress, dialects, etc. and so interacting with one another outside of the biannual event was unprecedented (until Orgrim and Durotan). This meant that friendships and even marriages were within the clan itself.

The Bleeding Hollow is part of the seven featured clans in Warlords of Draenor. They are known for their achievements during the First and Second War on Azeroth. They are a dark, bloody minded clan (similar to the Shattered Hand clan) and are lead by their Chieftain Kilrogg Deadeye who ripped out his own eyeball. Very little is known about them.

“Not a lot of people know a lot about it and that’s probably because we hadn’t made up a lot about it until very recently.” Chris Metzen, BlizzCon 2013

Their culture is founded on the shamanistic ways similar to the Shadowmoon clan. However, the similarities stop there. The clan is vicious and savage by how they defeat their enemies with madness. Their tactics are reminiscent of the trolls on Azeroth and by being very tribal. They fight in a berserk fury with hallucinogenic weapons from the tree tops of their home in the Tanaan Jungle Peninsula.

The Tanaan Jungle (called Tanaan Peninsula at BlizzCon) is better known to players as Hellfire Peninsula. Before the fel energies corrupted and drained away all life in the area, it was a lush and monstrous jungle. This jungle has primal creatures and plants comparable to the wilds of Un’Goro Crater and Sholazar Basin. And it will be home to the Dark Portal once more, connecting between worlds and time. How could Kilrogg allow such a monstrosity within his claimed lands? 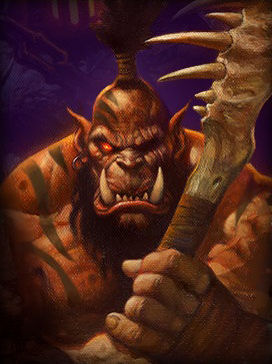 The Bleeding Hollow is named for the eerie tradition of removing one’s own eye. All of the Chieftains have undergone this ritual for generations, according to information at BlizzCon.

On the eve of becoming Chief, Kilrogg traveled into a sacred area of the jungle to foresee how he would lead his people and what honorable death he might have. By removing his eye, he envisioned what would be and how to lead his people to bloody victory.

And he has led the Bleeding Hollow for many years as he has seen fit. He is one of the oldest of the Orc Chieftains and he has made certain to keep that title.

Because of his age, Kilrogg is careful not to be wasteful of any lives of his clan. Sometimes, this prudence is seen as a weakness and others might challenge for leadership. His will and strength have been enough to defeat not only three of his own sons but two grandsons as well.

Chieftain Kilrogg Deadeye is a legendary and powerful Orc not because of his age, but for the deeds done under the unified banner of the Horde.

The story of the Bleeding Hollow didn’t start until after the Horde forces had crossed through the Dark Portal sometime when the Second War began. The majority of the clan was stationed throughout Khaz Modan to control the mining and oil refining for the Horde.

The traitorous Gul’dan forced a split among the Horde during his search for the Tomb of Sargeras. His greed decimated them and the remainder of the Orc army fell back to Khaz Modan. Their only option was retreat to the Dark Portal and back to Draenor.

While what was left of the Horde headed to Blackrock Spire, Kilrogg and his Orcs kept the bulk of the Khaz Modan Dwarves occupied. But the battle was lost there and Orgrim Doomhammer was taken as a prisoner as were many others who surrendered. The Bleeding Hollow refused to surrender and went into hiding.

It wasn’t until two years later, a vision would call them to return to the valley where the Dark Portal had sat. Kilrogg and some of his Bleeding Hollow were among the first and only clan to return. Their intelligence on Azeroth would be key for Ner’zhul’s plan to obtain certain magical artifacts to save his people on a dying world.

After the Bleeding Hollow aided in distracting the Alliance forces and the small infiltration party, Kilrogg accompanied the old shaman to the Black Temple. On the way, they were forced to stop at the old Draenei burial grounds, Auchindoun. Kilrogg feared their task would be doomed if they were to stop there, but was left with little choice since the Alliance forces were on their trail (after Hellfire Citadel was claimed and the Shattered Hand retreated).

It was deep in the Shadow Labyrinth that Kilrogg Deadeye made his last stand against the Humans. He and a group of Orcs fought so Ner’zhul could make their escape. Kilrogg faced-off against Danath Trollbane to slow their advance. Taking advantage of the Chieftain’s half-blindedness, Trollbane threw his sword at Kilrogg’s throat and slashed it open.

After Draenor was torn asunder from Ner’zhul opening multiple portals to escape Kil’jaeden’s wrath, what was left of the Bleeding Hollow clan splintered. Those who remained on Azeroth eventually joined Thrall (Go’el) in his new Horde, but there is no documentation on how they serve their Warchief. The Orcs who endured the shattering of their home planet were split just as much by two different leaderships.

The son of the late Kilrogg Deadeye, Jorin Deadeye, managed to avoid the corruption and is the chieftain of the Bleeding Hollow clan. Though they were forced out of their homes by ogres, they joined with the Mag’har in Nagrand. How Jorin avoided the demonic corruption, like Garrosh Hellscream, is unknown though it is likely that he was among those afflicted by the Red Pox and was quarantined.

Fighting alongside their brethren (the Shattered Hand) in the Fel Horde, the Bleeding Hollow clan is lead by two strong leaders. Grillok Darkeye is the most powerful dark shaman of the clan while Warlord Morkh has brute strength. Though the relationship between the two is unclear, it is evident that Grillok is the more adept of the two since he underwent the Bleeding Hollow Chieftain ritual of having his eye removed.

Though the Fel Horde is ultimately dismantled by adventurers, some of the Mag’har Bleeding Hollow join the new Horde in the campaign against the Scourge Invasion in Northrend.

The Definition of Insanity

As stated before, what players know about the history of the Orcs will be irrelevant once Garrosh travels back in time to Draenor. More about the Bleeding Hollow will be revealed without the demonic influence from Gul’dan. Garrosh will either have to invade their lands to build the Dark Portal once more in its iconic location or convince them to join the Iron Horde. The clan were never true followers of Guldan’s and they are not like the other Orc clans with their culture. Kilrogg Deadeye will see strength in joining with the Iron Horde.

Their deep-rooted tribal ways will be the core shamanism of the army. They’ll learn how to twist the elements like the Twilight Hammer in Cataclysm and the dark shaman in the Siege of Orgrimmar. And with their guerrilla tactics and psychotropic alchemy, they will be similar to the Darkspear Shadow Hunters. The Bleeding Hollow will be a feared clan to face up against in combat because of their destructive powers, immobilizing tack, and healing abilities.

The Bleeding Hollow will be savage in Warlords of Draenor. Will they fulfill their destiny and become legendary?