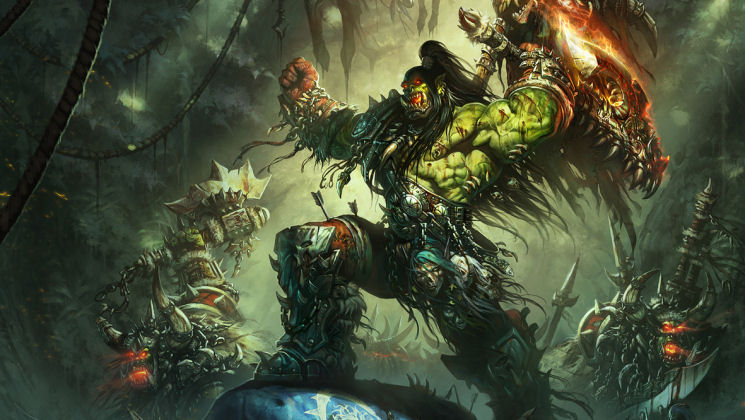 Conspiracy Craft takes a stab in the dark at the latest potential Warcraft trademark, Warlords of Draenor.

A second possible Warcraft trademark has everyone on the edge of their seats and plenty of speculation is making its rounds. With a name like Warlords of Draenor, it screams World of Warcraft or at least associated with the franchise.

So just what can we glean from these two key words. Not much and too much at the same time. So let’s break down each word and try to discern where the next adventure might lie if this is truly to be the next expansion. 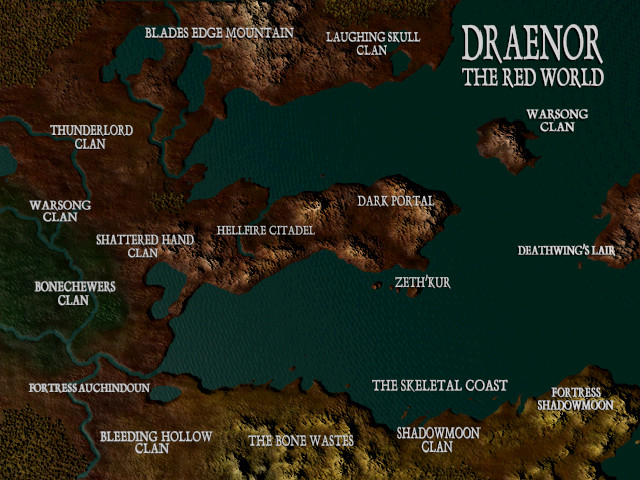 Just mentioning this planet opens so many avenues. Draenor is the former planet for what players now know as Outland. It was the home of the orcs and the refuge of the draenei after they escaped their dying planet, Argus. It was a peaceful planet before the Burning Legion began their corruption.

And what we’ve seen of Draenor can’t honestly be it. The planet had water, oceans, and based on the Warcraft RTS map, the Warsong clan appear to have lived on an island. So traveling by water was more than possible.

After all, when you think about the different bovine-humanoid races in Azeroth, there could have been many different orcs. This could mean that there were more of them across the great watery expansion and lead to possibly more orcs and even demons of the Burning Legion in places we haven’t been to yet.

But most know that the Burning Legion lead to the creation of the Dark Portal and eventually the catastrophic conflict between humans and orcs. While the orcs were beaten back to Draenor, many fled through the multitudes of portals that ripped the planet apart.

When you hear the word “warlords,” you know that they have experienced their fair share of battles and bloodshed. And although plenty of Draenor’s denizens are now the warmongering type, it all started with the orcs.

It would make perfect sense that some of those orcs were able to flee to other planets or another part of the planet. With the idea of there being more to Outland, we could finally discover it and them.

But the term “warlords” isn’t limited to just the orcs. The now Outland is crawling with the same corrupting Burning Legion. They seem to love setting up base on conquered planets or remains of planets. And there is certainly no way that Illidan Stormrage was able to root out or turn them all to his side. Again, the planet of Draenor had to have more landmass than what players have seen.

And Illidan and his followers could even be in the future Warlords of Draenor. Yes, most of those are dead, but this could be the time of his redemption. I know, it sounds crazy, but I’ve been watching a lot of Supernatural and the idea that those demons were all once human could apply for Warcraft. Once claimed by the Burning Legion always owned by the Burning Legion–in life and death. It’s quite possible for his revival thanks to the very beings he had disobeyed.

But let’s not forget the Alliance heroes who ended up trapped on the other side of the dark portal. Turalyon and Alleria Windrunner have been missing since the Second War. And everyone have been waiting to finally see them again.

With all this information, just what are we looking at for a possible World of Warcraft expansion. Like I said, there’s still too little and yet too much to go on.

I’ve heard the “rumors” involving time travel and a “hero” of the past being the end-boss. While players have ventured into the past before, that was through the aid of the Bronze Flight.

Right now, the Bronze Flight is out of business. Time travel may be possible, but no one is keeping watch since the Aspects lost their powers. There’s no maintaining time. Though to be honest, I feel that isn’t 100% true for the entire flight after reading Dawn of the Aspects.

But I’m going to be honest, I don’t like the idea of time travel. I never have. It goes back to watching Back to the Future when Marty changes his parents’ past. The Hour of Twilight’s Well of Eternity was brutal enough for me when players took a piece of history out to be used conveniently against Deathwing. That seemed, to me, to be the start to the Infinite Flight.

The fact that they used the name of the blown up planet sends alarm bells. Most will think that we would travel back before Draenor blew up, but building an entire expansion on that just puts a pit in my stomach. It was bad enough when Krasus and Rhonin traveled back to the War of the Ancients in Richard Knaak’s novels before their time–or rather Rhonin’s time.

The only way I would be comfortable with time travel in the coming expansion is if it were in clusters, much like we’ve seen with the Timeless Isle or the previous Cavern of Times instances. But to have an entire expansion on time travel… I’m hoping that won’t happen. To change history to that degree spells trouble. That’s destroying ourselves. Unless, we are there to keep time in its place and aid lost heroes.

I’m still standing by my theory with Garrosh on just why we would return to Outland–and I do believe it is tied to the current Outland. After all, there was that vision with Anduin Wrynn walking up to a warded cage that could have Garrosh inside awaiting his trial — the perfect means of escape. But there’s no where left in Azeroth for him to run.

And as I’ve stated before, the only place left to go is home. He’ll run back to another part of Outland and use the opportunity of the Burning Legion to further his escape. We’ll discover new portals on the broken planet, possibly portals to another planet even or another part of Azeroth itself that the Legion has attempted to breach.

With these discoveries, we might finally meet Turalyon and Alleria once again. Though they are best know for their fight against the orcs from the Second War, they’ve surely experienced the darkness of the Burning Legion when they started setting up on Outland after the portal was closed.

And we would finally finish our business with one particular leading demon, Kil’jaeden. Although he was flushed back into the Twisting Nether at the Sunwell, he’ll see Outland more than cozy since the traitor, Illidan’s demise. And Outland is still the best position for the continued efforts to destroy Azeroth because of the Dark Portal connection.

I still don’t see the Burning Legion in the next expansion or going after whoever has been tampering with time from the Timeless Isle visions. Blizzard has a knack of leading their fanbase in one direction only to take a completely different route from the previous end of expansion hints.

And the previous direction we were headed was back in Cataclysm. The Old God who was signing Deathwing’s paychecks is still at large. But more than that, it seems that the naga and Queen Azshara could be working for the same one. And she slithered away from harm with her prize Neptulon. Although I might be completely wrong, I still feel that going back under the sea is our next course.

Is it the next expansion?

But the question remains on if Warlords of Draenor could even be the next expansion. The US trademark has finally been processed and clearly shows it to be a future “computer game” (and not the movie like I was secretly hoping). However, it could be part of any of the Blizzard Entertainment franchises such as Hearthstone: Heroes of Warcraft or Heroes of the Storm.

We won’t know for sure until November 8th at BlizzCon. But are you still in line with the expansion rumors of time travel or will Blizzard pull the wool over our eyes and choose a different course?