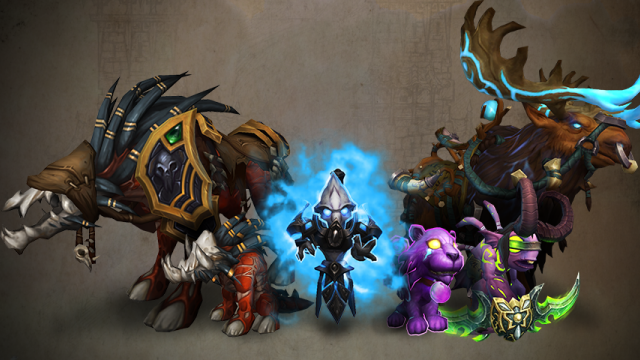 Preview of new mounts and pets coming to World of Warcraft: Legion!

To keep the hype up a little bit longer for World of Warcraft‘s upcoming expansion, the team revealed a preview of Legion‘s new mounts and pets. At a quick glance, many already know which pets are coming from which promotion or other franchise connections.

Legacy of the Void Collector’s Edition

Warcraft players can finally rejoice at the prospect of their promised moose from former Blizzard employee, Greg “Ghostcrawler” Street. This epic mount looks more badass than the camels from Cataclysm with heavy druid influence. And even Greg Street is joining in with the celebration.

Okay, I'll be a moose avatar just for a day or two. Because: pic.twitter.com/WIIl0hcZEW

It’s unclear if the new murloc pet will part of the BlizzCon 2015 package. Usually, Blizzard likes to link the murderous little buggers with their company event in Anaheim, but fans could be in store for something new along with a Heroes of the Storm skin, StarCraft portrait, Hearthstone cardback, and Diablo banner.

However, their naming choices for some of the new vanity items are complete missed opportunities. Murllidan would have been a much more Murloc-ish name since several Warcraft noteable characters do end with -idan. Plus, the added rolling L flair to speak the language of the the little guy.