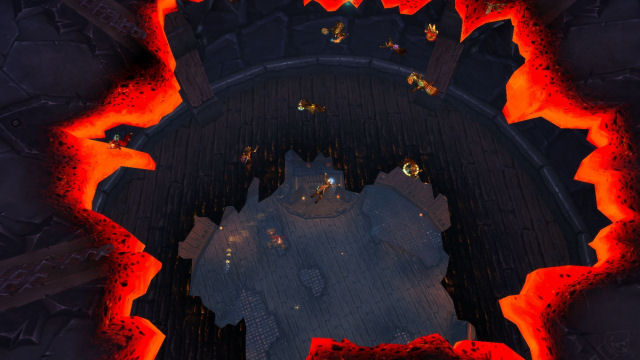 Defeat Warlord Blackhand inside his own Crucible of Blackrock Foundry!

Blackrock Foundry is a non-linear, four wing instance that allows World of Warcraft players to face several bosses in any order they wish. This guide is designed to give the most optimal choices based on how difficult each boss is within each wing.

Some bosses may require to be skipped simply because they are designed to be faced later in progression rather than simply clearing an entire section. Warlord Blackhand is the final boss of the Blackrock Foundry raid. The doors to his Crucible will only open after all previous bosses have been defeated.

The other wings include: the Slagworks, the Black Forge, and the Iron Assembly. The following ratings are based on a first impression and defeat of each boss.

Warlord Blackhand is a three-phase, single-target encounter that will require high raid awareness and heavy movement. The floor will shatter beneath players’ feet, bringing them to a new encounter area. Blackhand will gain new abilities depending on the room he appears in, growing in strength from his fiery rage at the intrusion.

Blackhand has three abilities that will persist throughout all three phases: Throw Slag Bombs, Shattering Smash, and Marked for Death.

Melee players particularly will need to avoid his first ability where he will Throw Slag Bombs. He will actually toss 3 Slag Bombs around where he is standing. Players should move quickly away from them to avoid triggering any and dealing Fire damage within 10 yards of the explosion.

At 100 Energy, Blackhand will swing his Forgehammer with Shattering Smash at his current threat target, the Main Tank. The player will be knocked-back and stunned, losing all threat.

Marked for Death is a debuff that will effect at least one player, mostly Range and Heals. Marked players will have 5 seconds to LOS (line of sight) Blackhand from his Impaling Throw. A large spear will still appear and hit anything between it and its target. All players will want to avoid standing between Blackhand and the Marked for Death target. 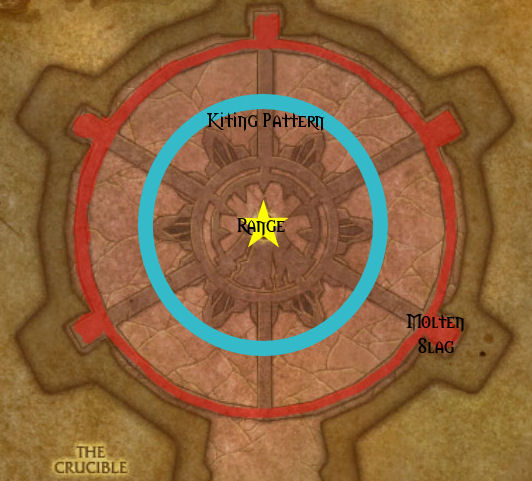 The first phase against Blackhand will take place within the very forge of the Blackrock Clan. It is made primarily of metal with large gutters along the outer edge of the encounter area. Once he is engaged, he will call for the Molten Slag to flow slowing heating the floor from the outside to the center. Players who fail not to stand on the heated floor will be Burned.

Ranged and Healers will want to begin the fight in the center of the encounter area. It will be crucial for tanks to slowly kite Blackhand around the range group with each Smashing Blow and thrown Slag Bombs.

During phase one, Blackhand will cast Demolition in random parts of the encounter area causing debris to fall from the ceiling and damaging any players who fail to avoid it. Demolition comes in two different sizes: Demolition and Massive Demolition. Players will be able to tell which is falling by the swirling indicators on the ground. Demolition is a small, brownish area while Massive will be more orange-yellow.

The Massive Demolitions will be important for players who are Marked for Death. Again, they will have 5 seconds to place the large pile of debris between themselves and Blackhand to avoid being Impaled.

When Blackhand’s health reaches 70%, he will drop an Exploding Iron Star from the ceiling. It will blast a giant hole in the floor, forcing players to fall into the next encounter area.

The raid should try to stack in the center right before he drops the Iron Star to avoid taking damage from the Slag Bombs. Players will not have any fall damage as they land in the Warehouse.

Upon landing in the Storage Warehouse, Blackhand will call out Siegemakers to assist him. They will be large, iron tanks that will Fixiate on a random player. The tanks will need to be kited around the encounter area and the Fixiated target will need to avoid being hit by its Battering Ram.

At 100 Energy, Siegemakers will fire a Mortar. Upon impact, it will set fire to the hardwood floor with Blaze and any players caught in it will be Burned. With the first Mortar fire, the tank will go into Overdrive, causing it to fire Mortars more frequently.

Since Marked for Death will still persist in Phase Two, those targeted will now use the Siegemakers to LoS from being Impaled. The spears will instead break off the Blackiron Plating and decreasing the armor of the Siegemakers. 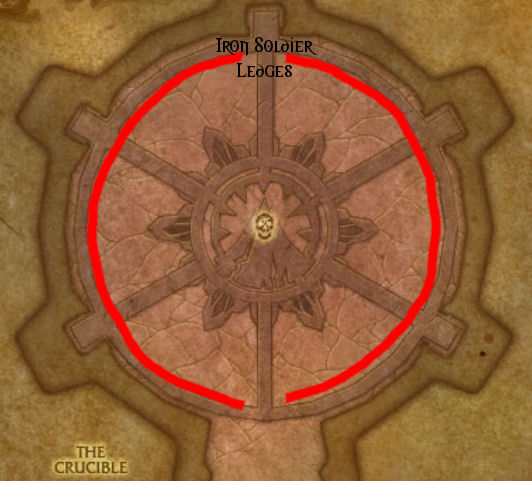 Aside from the tanks, Iron Soldiers will appear on the upper ledge at Blackhand’s call. The ledge area is actually split in half causing one side or another for them to appear on as they fire Explosive Rounds on the raid. Range and Heals will want to spread out to avoid sharing the damage with others closer than 6 yards.

Players on the ledge will gain stacks of Incendiary Shot. These stacks will drop once the party drops down, so the same group will be able to return to the ledges repeatedly. 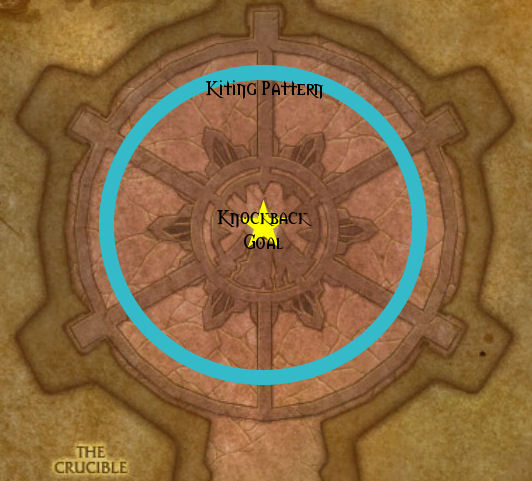 Once Blackhand reaches 30% health, he will cast Shattered Floorwhich will deal heavy damage to the entire raid as they are transported on top of an Overheated platform. Overheated is unavoidable Fire raid-wide damage while on the Iron Crucible.

The raid will need to be careful not to get knocked off of the platform as there is no wall. The Tanks will then need to slow kite Blackhand along the outer edge, freeing up the center for safe landings from any knockbacks.

Blackhand’s three main abilities will become empowered upon reaching the Iron Crucible. They will deal more damage with new mechanic twists to each one.

Massive Shattering Smash will deal more damage on the Main Tank, so players will need stack on them to split it. Where he slams his Forgehammer will leave a Slag Crate that cause Huge Slag Eruptions dealing heavy Fire damage.

Those hit with Massive Shattering Smash will be knocked back and should avoid being knocked off the platform. Where they will be knocked to will depend on where they are standing around the Tank, so it will be important for him to be turned towards the center or the outer edge before Smash is complete.

Instead of dropping three Slag Bombs, Blackhand will now attach two of them to random raid members. Those with Attached Slag Bombs will have five seconds to move away from the rest of the raid before they explode. These explosions will leave a Slag Hole.

There are no objects for players to LoS when Marked for Death. Instead, they will need to move away from the raid into a clear spot for Impaling Throw, but still relatively close to Blackhand since they will knocked back as well. Immunities or Teleportation abilities should be reserved for Impaling Throw.

This phase will be a race in damage and Slag Crates/Slag Holes taking up the encounter area, so Bloodlust/Heroism/Time Warp should be saved for it.