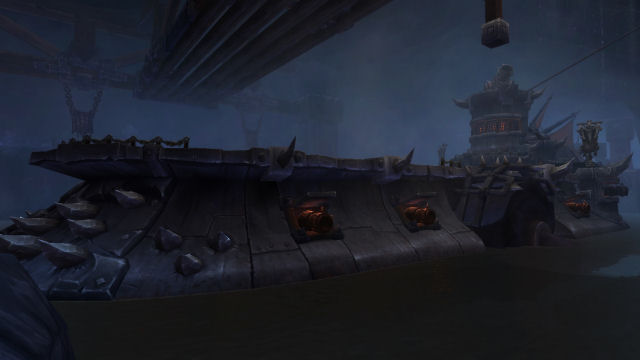 Defeat the Iron Maidens of the Blackrock Foundry’s Iron Assembly!

Blackrock Foundry is a non-linear, four-wing instance that allows World of Warcraft players to face several bosses in any order they wish. This guide is designed to give the most optimal choices based on how difficult each boss is within each wing.

Some bosses may need to be skipped simply because they are designed to be faced later in progression, rather than clearing an entire section. The Iron Maidens are the final boss of the Iron Assembly and will require players to face them later for Normal, Heroic, and Mythic difficulties.

The other wings include: The Slagworks, the Black Forge, and Blackhand’s Crucible. The following ratings are based on a first impression and defeat of each boss.

Beastlord Darmac is a multi-phase fight with options to control these phases through the Prime Beasts. Each Prime Beast has its own set of abilities while Darmac is mounted upon them. But when they are killed, he will consume the heart of the fallen to retain some of their abilities for himself. 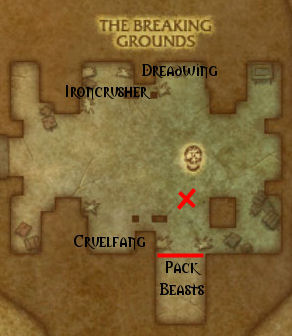 The easiest order to face each Prime Beast is as follows: Cruelfang, Ironcrusher, then Dreadwing. The Tanks will need to position Darmac near the next Prime Beast for each transition, but remember to pull him and his mount towards where Pack Beasts will spawn.

The raid, especially Ranged and Heals, should spread out. This is to avoid some of the shared damage from Heavy Spear impact, Rend and Tear, Stampede, Conflagration, and Inferno Breath/Superheated Shrapnel. 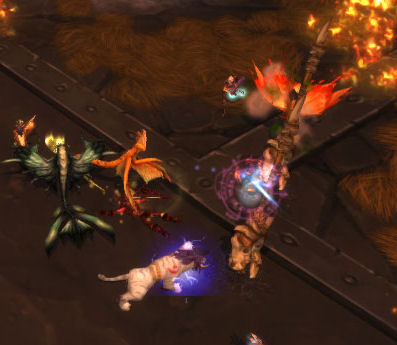 It’s important that DPS understand the kill priority with all the additional adds from Call the Pack and Heavy Spears. Any players Pinned Down takes top priority while Melee should try to cleave the Pack Beasts taunted by the tanks towards Beastlord Darmac and the Prime Beast.

Any class with DoTs should cast them on Heavy Spears to reduce their number before Beastlord Darmac takes on the Rylak’s abilities. DoTs should also be refreshed on the boss before he mounts a Prime Beast.

Phase 2: Back of the Beast 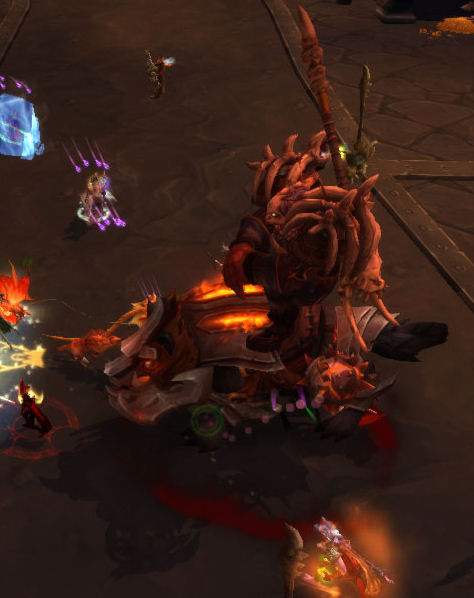 Cruelfang is the simplest of Prime Beasts to encounter. During Rend and Tear, Melee will want to spread out away from the Tanks on his returning leap to avoid gaining the stacking debuff. The Pack Beasts will need to be top priority since the Worg will increase their attack speeds with Savage Howl, which can be dispelled from the Prime Beast with enrage-removing abilities (Soothe Animal, Tranquilizing Shot). 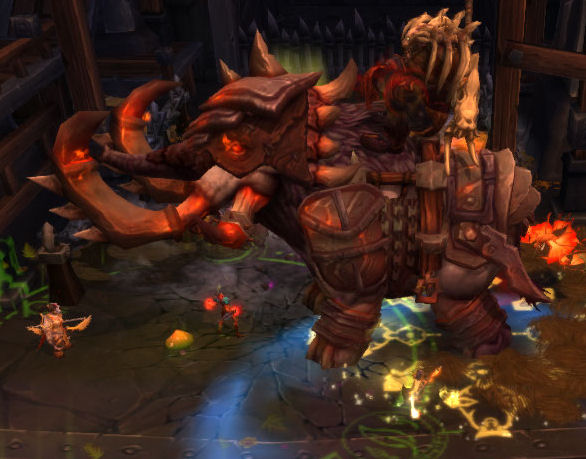 Ironcrusher deals raid-wide damage with Tantrum that should be mitigated with damage reduction personals. Stampede will be harder for Melee to avoid, but easier for Range/Heals since they will be spread out. Be prepared to be knocked back for the Stampede ability.

Dreadwing has the least amount of control, especially with Inferno Breath. Raid members will need to be prepared to move quickly out of the flames, while the stacking debuff from Breath can be dispelled. But more importantly are all the ground effects that players should not stand in: the fiery patches of ground ignited by Inferno Breath and the smoldering corpses of the Pack Beasts.

The final phase when Darmac is empowered by all three Prime Beasts will be the most difficult. It is during this part of the encounter that Bloodlust/Heroism/Time Warp should be cast.

Since there will be no more Prime Beasts, Tanks should move closer to the spawn point for the Pack Beasts. But again, the Pack Beast corpses will smolder with Beastlord Darmac as well, and so should be slowly moved around to keep melee out of fire.

Operator Thogar is more of an environment encounter that requires heavy movement and raid awareness. While the boss isn’t threatening with his ability list, the Moving Trains and Reinforcements will provide the majority of the challenge.

The raid should be split into two groups prior to pulling the boss. because at some point during the encounter, the raid will be forced on either sides of the encounter area. Tanks will not need to be assigned to groups since they may switch depending on threat rotation.

Blood Lust/Heroism/Timewarp should be used at the start of the encounter. Operator Thogar should also be pulled to the Track 3 as it will require the most minimal movements for the beginning of it.

C’mon and Ride It

There are four tracks (labeled accordingly) in the encounter for Moving Trains, which are on a set schedule. Players too slow to move away from an incoming train will be thrown through the raid area and die instantly. Facing the camera to one set of doors will help warn when a train is coming as one or more open.

While the majority of the players will want to be on the “safe” set of tracks, the raid will want to loosely spread out to avoid sharing damage. Prototype Pulse Grenade and Delayed Siege Bombs will litter the limited encounter area. Players should move away from these and fellow raiders when targeted.

Players will want to kill the Reinforcements in a priority order: Grom’kar Flamemenders > Grom’kar Man-At-Arms > Iron Crack-Shots > Iron Raiders. Melee will want to interrupt Flamemenders’ cast Cauterizing Bolt and stand behind Man-At-Arms to avoid Reckless Slash. Ranged will need to focus down any Iron Gunnery Sergeants as they appear.

The primary reason why Reinforcements should be taken out as quickly as possible is due to a buff they gain from Operator Thogar: Berated. This is a stacking buff that increases damage, haste, and movement speed while decreasing casting time.

It should be noted that whichever tank has threat of Thogar when the Man-At-Arms arrives should NOT pick him up as well. Instead, the Off-Tank should be with the group with Man-At-Arms to avoid having the boss Berate buff him.

During the 9th (20th Train) set of Reinforcements, two Iron Gunnery Sergeants will arrive. Ideally, range should focus on one Sergeant at a time to avoid having two players targeted by Delayed Siege Bombs.

The Iron Maidens is a council-based encounter (meaning the bosses do NOT share a health pool) with three bosses to contend against. Each boss should have their health brought down equally for the first 80%. The encounter has a soft enrage timer as soon as one of the bosses reaches 20% as they will overwhelm the raid with their set of final abilities from 100 Iron Fury.

The majority of the fight will be against all three bosses, but a small group will need to split off to board the Dreadnaught Ship with one of the bosses.

A Dreadnaught team should be designated before pulling the bosses. One healer, 4-5 DPS, and (depending) 1 Tank will need to hop onto hooked chains between the docks and the Dreadnaught Ship to be able to board with the boss.

All three bosses should be tanked roughly in the center of the starting encounter area. One of the bosses, Admiral Gar’an, doesn’t have a threat table, so cannot be tanked traditionally. Melee should stack behind all the bosses while range and heals spread out away from each other.

A designated area should be marked for Ritual of Blood. This is so fellow raid members will not get Crystallized Blood, which should only be intercepted by a Tank for Marak the Blooded.

Players targeted by Rapid Fire should quickly move away from party members and do their best to avoid being hit by the high-explosive bombs. Ideally, those targeted by this debuff should move along the outside of the encounter area.

Marak will gain Bloodsoaked Heartseeker at 30 Iron Fury. Since the raid should already be spread out, it shouldn’t deal quite as much damage the more it has to travel. This may only be problematic for Melee targeted near each other.

Enforce Sorka gains Convulsive Shadows which should never be dispelled. If it is dispelled, it will deal heavy damage from Shadow Explosion based on the number of stacks remaining.

Admiral Gar’an will set her sights on a random ranged player with a bright red line for Penetrating Shot. The targeted player will take heavy damage, so the rest of the raid should move into the line of sight to soak damage.

I’m Sailing on A Dreadnaught Ship

At roughly 1:00, 4:20, and 7:20 into the encounter, one boss with the lowest health will board the Dreadnaught Ship and begin Warming Up the main cannon for Obliteration Barrage–which will cause the raid to wipe. Again, 1 healer, 4-5 DPS, and possibly 1 tank (depending on the boss) should take the hook chains up.

The team that goes up will need to take out the Deckhands aboard and Sabotage the Warm Up with ammunition found at the front of the ship.

The raid does have limited control as to which boss will board the Dreadnaught Ship. The best possible order is Sorka > Gar’an > Marak.

While one the bosses is on the Dreadnaught and the small party breaks off to stop the Warming Up of Obliteration Blast, the rest of the raid will need to dodge bombs. There’s two repeating patterns until the Dreadnaught team is successful:

If a player fails to move out of the red areas marked, they will take Fire damage and be knocked back. Once Alpha has landed, players should move where they landed to avoid Omega. However, they should not remain in the Alpha areas for long as the bombs will explode. Once the Alpha set has exploded, the area is safe to stand in for Omegas’ to explode.

Once one of the bosses hits 20%, they will gain Iron Will which will instantly give all of them 100 Iron Fury. This is why it is so important to bring all three health meters down as equally as possible. Here is the kill order during this phase: Marak > Sorka or Gar’an.

As soon as 100 Iron Fury trippers, melee DPS should switch to Marak the Blooded as she deals heavy raid-wide damage with Sanguine Strike. The tank and heals should be chain-rolling survivability cooldowns to reduce the damage for the raid.

Enforcer Sorka will fix her gaze on a random player with Dark Hunt. The target should use a personal mitigation cooldown while healers should prepare for heavy damage. Discipline Priests are especially useful with Clarity of Will or Power Word: Shield.

Since Admiral Gar’an does not have a threat table, she will run about the room to Deploy Turrets that will spit out fireballs. To reduce the number of these from spawning, range will want to  focus on each Dominator Turret first before helping bring down one of the bosses. Tanks can also pull Marak and Sorka towards Turret spawns to help cleave them down if a group doesn’t have enough range.