Tips and Tricks for Blackrock Foundry: The Black Forge 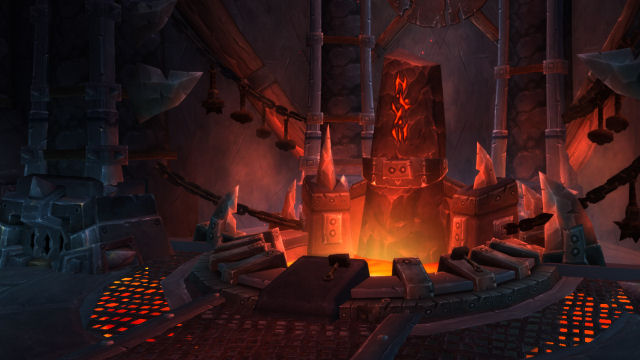 Put a stop to Kromog of the Black Forge inside the Blackrock Foundry!

Blackrock Foundry is a non-linear, four-wing instance that allows World of Warcraft players to face several bosses in any order they wish. This guide is designed to give the most optimal choices based on how difficult each boss is within each wing.

Some bosses may need to be skipped simply because they are designed to be faced later in progression, rather than clearing an entire section. Kromog is the final boss of the Black Forge and will require players to face him later for Normal, Heroic, and Mythic difficulties.

The other wings include: Slagworks, Iron Assembly, and Blackhand’s Crucible. The following ratings are based on a first impression and defeat of each boss.

The area for Hans’gar and Franzok takes place on a giant conveyor belt that will either remain stationary or change directions. This encounter is a multi-phase based on the shared health pool loss. Each phase will switch bosses and objects that need to be avoided by the raid.

The bosses Hans’gar and Franzok require minimal strategy to defeat as the environment is more hazardous than their limited abilities. The general idea is to avoid getting hit by the Searing Plates or Pulverized by the stamping presses. There is a small strip that is stationary, but players can still be hit as the effect is larger than the visual.

While players are moving around on the conveyor belts, they will also need to be aware of Body Slam from both bosses. A red arrow will appear above the targeted player’s heads and should move away from their fellow raiders so they will not have the Shattered Vertebrae debuff. Please note that those targeted with Body Slam will NOT receive the debuff.

However, the bosses’ abilities do increase in damage as their health deteriorates. Healers will want to prepare for spiking damage when Franzok casts Skullcracker on a random raid member.

And they’ll especially want to pay attention as each boss leaves the area, since both tanks will need survivability cooldowns for Crippling Suplex. This ability will cause heavy damage if the tanks don’t cast any cooldowns themselves.

The final phase when both bosses and the stamping presses are active will be high in damage. To counter this, Blood Lust/Heroism/Timewarp should be used to maximize healing and damage dealing.

Flamebender Ka’graz is a cycling phase encounter that will require heavy raid awareness and target prioritization for DPS. Over time, the encounter will grow in difficulty as she gains more Molten Energy and more abilities.

Tanks should keep Flamebender Ka’graz close to the center of the encounter area to allow range to spread out in the space available. It’s crucial for range to try to avoid as much damage as possible.

Aknor Steelbringer should be picked up along with Ka’graz and face Devastating Slam away from the raid. By having him in melee range, he will take cleave damage but should be dead before 25 Molten Energy.

Rangers will need to be aware of their spacing and avoid several mechanics. While Aknor is still alive, he will Drop the Hammer on random players. Enchanted Armaments will slowly take up the encounter space and will not despawn until the fight is over. And finally, Lava Slash will erupt and deal damage to those near the targeted player.

Since there are few mechanics to avoid with the low Molten Energy, Blood Lust/Heroism/Time Warp should be cast roughly 30 seconds after the pull.

Flamebender Ka’graz will gain the ability Molten Torrent. Those who are targeted with Molten Torrent should run into the melee group to split the damage. However, those with strong damage reduction cooldown can take the full brunt of the damage of Molten Torrent.

Two Cinder Wolves will be summoned to the fight with Fiery Link attached. One will become Overheated and should be taunted by the tank while the other will randomly Fixate on a ranged member. Tanks should re-position the Overheated Cinder Wolf and Ka’graz so melee can avoid Fiery Link.

Both Cinder Wolves should die within 8 seconds of each other, otherwise they will gain half their health back from Rekindle. And they should be killed before 100 Molten Energy to avoid multiple Firestorm channels.

Blazing Radiance is her new ability that will target a random ranged player. Players should move away from the rest of the raid when they have this debuff to avoid sharing damage.

Upon reaching 100 Molten Energy, Flamebender Ka’graz will begin to channel Firestorm. The raid should quickly move together and loosely stack to maximize healing. As soon as Firestorm ends, the raid should spread back out as with the first pull. Players should watch for red markers for Magma Monsoon projectiles as it ends.

After exhausting all of her Molten Energy, the encounter will repeat through the Molten Energy phases and she will gain Flamefury that will empower her blade with Rising Flames. Tanks will need to taunt more frequently because of the Rising Flame stacks.

Again, the encounter will repeat through the Molten Energy phases and the last of the Rising Flame stacks will end around 50 Molten Energy.

Kromog is a two-phase repeating single-target encounter. He has a hard enrage timer if he is not defeated within 10 minutes. The raid will be need to split into three groups: tanks, melee, and ranged/heals.

Tanks will want Kromog to face an outer corner and avoid facing the ranged and melee groups. Melee will stack “behind” the boss just within melee range of him, but away from the tank group. Ranged will be in the center of the encounter area so heals can easily reach both tank and melee groups.

During this phase, Kromog will cycle through several different abilities, some avoidable and others unavoidable. Rippling Slam, Reverberation, and Rune of Crushing Earth should be avoided by all raid members.

Rippling Slam has a tell-tale dust cloud before the earth erupts in a ripple towards its target. Reverberation are white-yellow, pulsing spheres that shoot out in a straight line. If melee is standing too closely to the boss, they may not have enough reaction time to avoid taking damage.

Rune of Crushing Earth generally appears in the center of the encounter area with ranged/heals groups. A large red rune will appear on the ground with two large stone hands. After ~25 seconds, they will clap together and deal damage to any between them. Ranged group will need to move ahead of any Crushing Earth runes together.

After one minute into the encounter, Kromog will cast small orange runes onto the ground. Hands will erupt from where the runes were and grasp the player standing in them. This is required as Kromog will begin raining Thundering Blows on the area–dealing damage to anyone not gripped by Grasping Earth.

Ideally, the raid will want to be grabbed near ranged/heals group. Ranged will go to the side of the area where tanks were positioned and melee will spread out on their side. Since tanks will be affected by Warped Armor, the runes closest to Kromog should be left open for them. This will leave some of the center runes for healers to be picked–while still avoiding the Rune of Crushing Earth (it will still deal damage to those gripped).

Once everyone has been grabbed by their earthen hands, as much ranged AoE damage should go out to then free the raid. Since healers have such low damage output, DPS will need to help break them free.

If the Grasping Earth isn’t taken down before he finishes Thundering Blows, he will channel Stone Breath until melee (preferably tanks) are within range.

After the first Runes of Grasping Earth is complete, future Grasping Earth phases will happen every two minutes. Kromog will return to his previous shuffling ability phase.