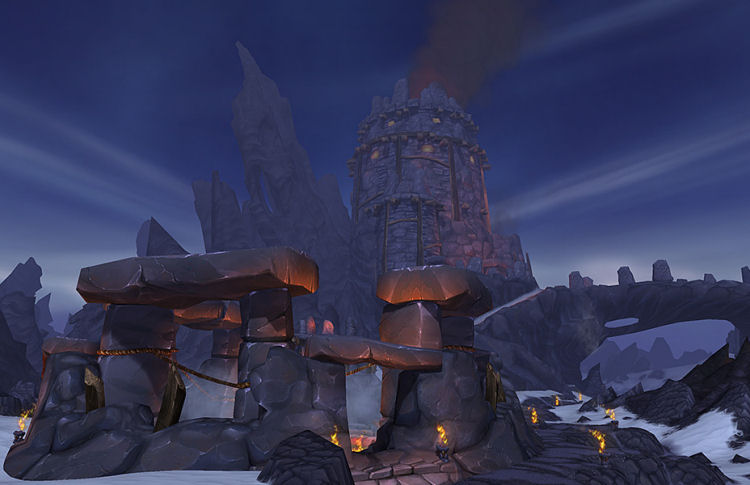 Hazzikostas shares the future of raiding in Warlords of Draenor in the final Dev Watercooler!

Lead Encounter Designer Ion “Watcher” Hazzikostas finishes out the last 10 years of World of Warcraft raiding with a look forward to Warlords of Draenor. (Read Part 1 and Part 2) During Cataclysm and Mists of Pandaria, the world of raiding didn’t change too drastically. The end of Mists introduced a new raid difficulty called Flexible Raiding for the Friends-and-Family groups.

It has been fun to journey down memory lane with how raiding changed from Classic to Wrath of the Lich King and the quality of life adjustments in Cataclsym and Mists of Pandaria. But what does the future hold for the raiding community?

The latest technology in Mists Flex Raiding will be a prevalent feature in raiding. The ability to bring in 10-25 players to a raid was the answer to iron out the balance kinks. Raiding Guilds will no longer be forced to cancel raid night or PUG (pick-up group) with an inexperienced player from Trade Chat if that 25th player can’t make it to raid. With the Flexible technology, the raid will scale to accommodate 24, 13, or even 15-man teams. But in Warlords there will be a new raid structure and renaming the difficulties.

“Here’s a quick breakdown of how the new system works: We’re relabeling Flexible Raid mode Normal, and it will serve as the new baseline point of entry to organized raiding. We’re also combining the current 10-player and 25-player Normal modes into a single Heroic difficulty. Finally, we’re consolidating 10-player and 25-player Heroic into a new fixed-size 20-player Mythic difficulty.” 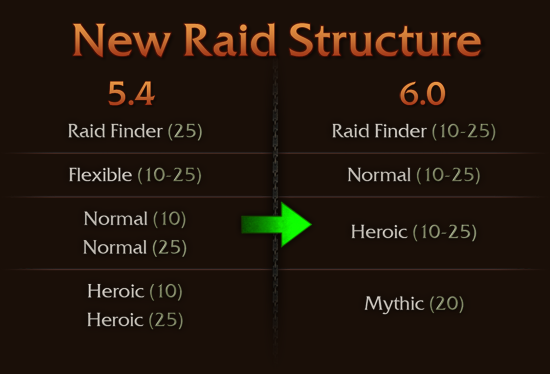 According to Hazzikostas, turning for 10 and 25-man sized Heroic raids has proved to be difficult over the course of Mists of Pandaria. As shown in the image above, Heroic mode will be consolidated to Mythic 20-man.

“Consolidating to a single raid size for Mythic will allow us to focus on delivering the best possible experience for our competitive hardcore raiders, while the flexible nature of Normal and Heroic mode provides an avenue for smaller groups to organically grow and continue raiding if they want to give Mythic a try.”

The Group Finder feature will appeal to the minority of players that miss PUGs from Wrath. This feature will allow players to easily search and form raid groups with other players in their region–kind of similar to OpenRaid. It will help guilds to find that 10th player for Normal mode or the player who has the weekend free to raid without the headache of Raid Finder.

Speaking of Raid Finder, this feature isn’t going anywhere any time soon and will still be important in the Warlords raid structure. And even with Group Finder, many players will still feel the Raid Finder is much more convenient for a quick raid wing clear.

Some players rarely learn or adapt after a wipe in Raid Finder. More often than not, those who don’t learn or come knowledgeable to Raid Finder get kicked from the group. Even those who successfully complete an encounter, but don’t top the damage numbers aren’t really safe from being kicked. All that work for little to no reward. Thankfully, the team has learned a lesson from Raid Finder.

“Our intent is for Raid Finder to allow players to experience our raid content, see the conclusion of major storylines, and witness the epic environments that our artists create without needing to commit to an organized raid group. We’d like to focus on that purity of purpose, and minimize the elements that have made guild raiders feel like they needed to do Raid Finder each week as part of their core progression. Accordingly, while loot will be awarded more frequently, Raid Finder in Warlords will have different loot tables than the Normal, Heroic, or Mythic versions of the raids, along with different item art. The gear will fall in between dungeon loot and Normal mode raid loot in terms of power, as it does today, but without the set bonuses and specific trinkets that tend to make raiders feel like they need to run Raid Finder alongside their weekly guild raids today.”

The Raid Lockout system that is currently present in Mists of Pandaria will continue on over to Warlords. A majority of players have enjoyed the separate lockouts so they can complete Normal or Heroic with their Raiding Guild and then do Flexible Raids with their Friends-and-Family. This is a freedom similar to Wrath of the Lich KingTrials of the Crusader or Icecrown Citadel.

Even Heroic and Mythic is Warlords will have separate lockouts. Hazzikostas explains that since Heroic has a flexible raid group size and Mythic has a fixed raid group size, it would have system difficulties.  This will also simplify the issue for Hardcore Raiding Guilds who’s end focus is World First Mythic Raiding.

But the difference from the Trial of the Crusader is that Emblems were required at the time to purchase better gear and those badges were obtained by killing bosses. Players were compelled to complete Normal 10-man Trial just for the extra Emblems.

To stop the issue from repeating, Warlords will be scaling back Valor rewards as the desire to reach cap. With the raids being less linear and with more shortcuts, raid teams could skip certain boss fights to focus elsewhere.

All of the different tactics, tech, and lessons learned over the last 10 years has helped the development team with raiding in Warlords of Draenor. Hopefully this system will provide the best experience for players of all raiding types (friends-and-family, PUGs, Raiding, and Hardcore Raiding Guilds) alike.