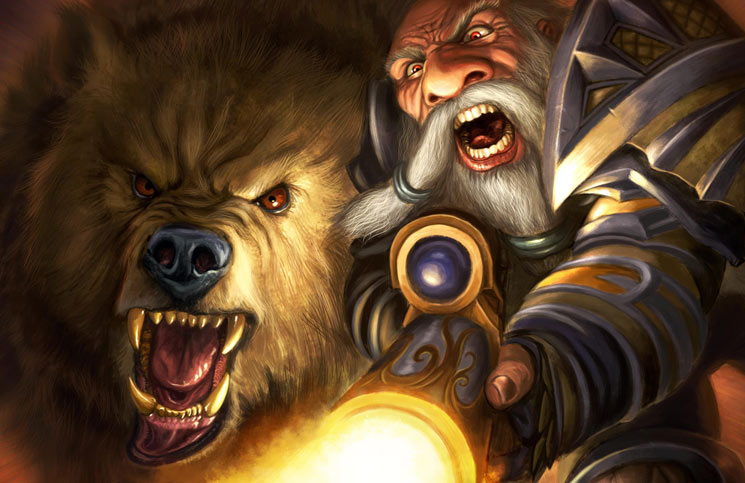 The newest Dev Watercooler takes a look at World of Warcraft raiding over the last ten years!

The raiding life in World of Warcraft has undergone changes with each expansion. Now that Warcraft is approaching its tenth year as a MMO (Massively Multiplayer Online) and a new expansion is on the horizon, the team takes a trip down memory lane with the latest Dev Watercooler written by Lead Encounter Designer Ion “Watcher” Hazzikostas.

This Dev Watercooler is broken into several parts explaining the past choices for each expansion and then taking a look into the raid design concept for Warlords of Draenor.

At the start of the Classic era of World of Warcraft, there were only two raid styles available to players: Onyxia’s Lair and Molten Core. But the other instances that are now known as five-mans, originally didn’t have a number cap.

“During the first few months after the game’s release, instances in general didn’t have any cap on the number of players that could enter at once, as long they were all in the same group (15-player Stratholme and Scholomance “raids” were not uncommon back then).”

It seems that eventually, the upper group limit number was then set to 40 and thus 40-man raids became the standard.

The first two raids took quite some time to complete. During Classic the majority of players were trying to reach the achievement of maxing a character level. Afterwards, there was a key quest chain in the open world for Onyxia’s Lair and a dungeon required attunement for Molten Core.

Coupling the time it took to reach the max level, completing key and attunement quests, and the fact that the first group didn’t kill Lucifron, the first boss in Molten Core, until two months after launch, raid content appeared to be difficult.

“Therefore, applying the tried and true principles of Internet forum logic, Lucifron was clearly more challenging than Garrosh—or any boss in the past 5 years for that matter. OK, maybe not. The delay was due not to the bosses’ difficulty, but rather the fact that it took even the most dedicated groups with extensive raiding experience from past MMOs that long to assemble a sufficiently large group of level-60 players who had obtained the appropriate dungeon and endgame quest gear. In many ways, that was the most challenging aspect of classic WoW raiding: the logistics of assembling and maintaining a sufficient roster with sufficient gear.”

When the next few raids were released throughout the first expansion, they were specifically tuned for 40-man groups who had a little extra gear. The final raid of Naxxramas meant that those who joined later would not even get to see Kel’Thuzad (which might be why it was re-introduced in Wrath of the Lich King). But there were two other raids set for 20-man groups.

“These 20-player raids placed more individual responsibility on the shoulders of raid members, due both to the smaller group size and the comparative difficulty of the encounters. Encounters like Jin’do, Hakkar (now retired), and Ossirian were proof that there was plenty of room for involved and challenging encounter mechanics in smaller raids.”

The Burning Crusade introduced a major change to raiding in Warcraft. Before raiding guilds would need about 40 players to successfully complete the high-end raids, but that number was cut nearly in half at 25-mans. According to Hazzikostas, this change had two objectives:

Also 10-man raids were officially introduced with the expansion. Karazhan was quite challenging, but it helped foster the idea of “friends and family” for raiding groups. These groups that had started the game together as co-workers, classmates, family members, etc. could finally raid as a self-sufficient team. However, these teams couldn’t experience the featured boss Illidan.

When Sunwell Plateau was introduced, it brought with it a new zone and rewards. The Justice Badges weren’t exactly new, but now players could earn then in a new 5-man instances as well as purchase gear from a vendor located on the Isle of Quel’danas. Also the requirement for attunement was done away with so players who joined later in the expansion would have a chance to force Kil’jaeden out of Azeroth. This would be a precedent of things to come in the next expansion.

The Wrath of the Lich King

Many players have very fond memories of The Wrath of the Lich King and ever new patch brought a new innovation to the raiding world.  And it is with this expansion that will shape how raiding is for players now.

Naxxramas, Obsidian Sanctum, and the Eye of Eternity

At the launch of the expansion, raids were set up for both 10-man and 25-man groups. Now the “friends and family” teams could see the story play out to the end. However, 25-man groups had better loot and a more difficult challenge. And Obsidian Sanctum had an added bonus of difficulty depending how how many henchmen you finished off before engaging the boss. This difference laid the groundwork for the next patch.

“Ulduar took the Sartharion model and expanded upon it, introducing a full tier where 9 of the 13 encounters had an optional “hard mode” that awarded superior loot if completed. This established the new norm for how raid content would be introduced: While average guilds slowly and methodically learn each encounter in a zone, top guilds quickly clear through the regular versions of the encounters and then spend weeks or months progressing through the harder-difficulty versions.“

Many players still prefer this difficulty system much more since it had the option of completion by performing a few of the encounters differently. But it seemed the team wanted to try something new in the next patch.

Trial of the Crusader

When the Trial of the Crusader was released, it introduced a definitive difficulty mode that could be turned on and off after completing the encounter once. Now there were four different versions of an instance (10-man Normal/Heroic and 25-man Normal/Heroic). Each difficulty had its own loot table with 25-man Heroic having the best gear since it was still tuned to be harder than its counter-part of 10-man.

“It may be of interest to note that at that time, we very nearly did not include a 10-player Heroic difficulty at all. There was limited evidence that many players other than 25-player raiders were actually doing 10-player Ulduar hard modes, but relying on anecdotal evidence and some firsthand experience, along with the fact that there hadn’t been much time at all for a serious 10-player raiding scene to develop, we decided to keep that difficulty.”

There was a draw back to having so many raids available to players and no boundaries set and that was that players were completing the Trials of the Crusader four times a week on the same character for the Emblems of Triumph.

Don’t forget to check out Part 2 that will take a look at raiding throughout Cataclysm and into the Mists of Pandaria!