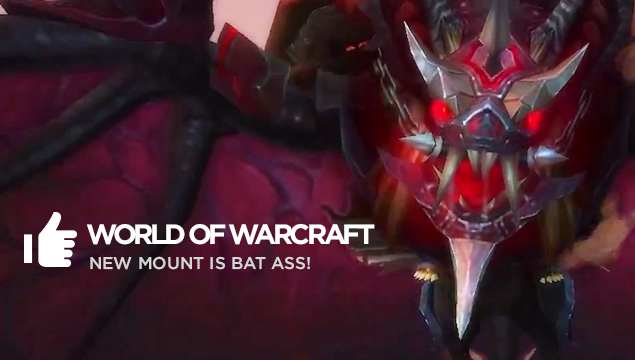 New to World of Warcraft Azeroth, the Armored Bloodwing mount! Now available in the Blizzard Store!

Soar into battle atop the undisputed ruler of the night skies—the all-new Armored Bloodwing mount. This monstrous, flesh-eating bat is the perfect companion for trips that call for death and destruction. Once purchased from the Blizzard Store, the mount will be available to all present and future characters on a single Battle.net® account.

It looks like the art team at Blizzard took some tips from Darnell here at GAMEBREAKER by adding some armor sprinkles to their new World of Warcraft pet store mount, the Armored Bloodwing! This “bat”ass mount definitely fits the theme of patch 5.3 Escalation since bats are the mounts of choice by most Darkspear trolls.

And it makes sense for a new pet store mount to make an appearance now since Blizzard’s quarterly earnings call was earlier this month! After losing about 1.3 million subscribers in Warcraft, mostly in the eastern markets, the team has to make up for the loss in one form or another. But where did this bat mount come from?

Well, the Armored Bloodwing was actually datamined at the start of this year around the time that patch 5.1 was released. That is roughly five months between the last pet store mount, the Swift Windsteed. And it definitely has a much more epic appearance to it comparatively!

Massive fangs, red glowing eyes, and swift aerial reactions, this is one mount you don’t want to cross in the dark part of Orgrimmar once the siege begins! Be the envy of your friends on whichever faction you play since the pet store mounts are account-bound! Will you be brave enough to purchase the Armored Bloodwing for €20/$25?