Blizzard Clarifies The End Of World Of Warcraft’s Challenge Modes 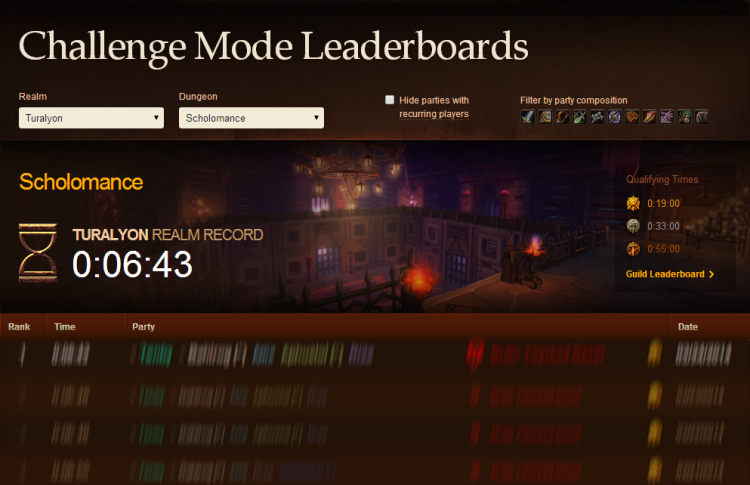 Realm Best Titles for Warcraft’s Challenge Modes will be gone, but receive ALL the mounts at the end of the Season.

Challenge Modes were one of the new additions to World of Warcraft: Mists of Pandaria. They were designed to, well, challenge players who enjoyed heroic 5-man dungeons. The majority of the dungeon difficulty went into Challenge Mode instead of the average queue for Valor Points. Challenge Mode did not reward better gear, but cosmetic ones to make your character stand out. Plus, there was the cool addition of titles, achievements, and mounts with each medal ranking.

But the season of Challenge Modes will be coming to an end “with the upcoming release of a patch prior to the expansion’s release.” We still don’t know when World of Warcraft: Warlords of Draenor is slated for launch. We haven’t even heard anything about closed beta. But it is coming. And with its arrival, the Mists of PandariaChallenge Modes will close.

Yesterday the original blog post on its early warning was updated expanding on rewards.

With the upcoming end of the Challenge Mode Season, we wanted to provide some additional clarification on how we plan to handle rewards.

Achievements: All Achievements associated with Mists of Pandaria Challenge Modes will become Feats of Strength.

@Sensashuns Completely removed. Those titles reflect being #1 while the CMs are active. When they aren't available, the title has no meaning

.@Netherspark Yes. If any character has the "All Silvers" MoP CM achievement, your account will get all 4 pandaren phoenixes in 6.0.

He then later went to the forums (he’s still learning how to limit himself to 140 characters).

Thanks for all the feedback, and I understand that while much of the news was positive, most of the people who have worked tremendously hard for the realm-best titles are justifiably upset that they will not be permanent.

The realm-best titles were added with little fanfare in Patch 5.4. It’s possible that they were a flawed idea in their conception, but the hope was to foster a bit of competition within individual servers, and to encourage people who had long since finished up their Gold medal collection to revisit the dungeons and try to dethrone the current champs. The titles were by nature transitory, where any day you might log in and discover that someone had beaten your time, and that you’d lost the title. We added Feats of Strength, which were permanent, to recognize and commemorate the fact that you held the title for a time. These Feats of Strength remain among the rarest in the game.

If we’d wanted to add a fixed Platinum Medal tier with additional rewards, we could have done that, but the point was to encourage friendly competition against people you see standing around town on a regular basis. We’re also aware that while essentially any class composition can get all Golds, balance breaks down at the extreme high end of the spectrum, and we wouldn’t want to set a formal benchmark that some groups couldn’t reach even with expert play.

Looking ahead to Warlords, we were left with the open question of how to handle the realm-best titles once the current set of Challenge Modes ceased to be available. By default, if we kept the titles as-is, the final players who held them on the day the servers went down for patch 6.0 maintenance would have kept them. Unless they ever transferred servers. Or unless their realm got connected with another realm with faster record times. This is because by definition, the titles are tied to a specific realm, and were always meant to be. Keeping the titles around with that level of inconsistency and uncertainty was not an acceptable outcome in our eyes.

We considered an alternate option of letting all players who have the Feat of Strength for ever holding a best time, however briefly, permanently keep the title associated with that dungeon. The major downside there, as I noted on Twitter, would be the precedent it would have set going into the next Challenge Mode season. Should the first group on a server to get a Gold Medal in the Shadowmoon Burial Grounds (one of our upcoming dungeons), the first week of the expansion, earn a permanent title, while another group a few weeks later that clears the dungeon four minutes faster (but not a new record at the time) does not get that same reward because they waited too long to stake their claim? We also do not want to encourage groups to seek out less competitive servers just to grab best times and thus permanent titles.

The groups that set records this time around will surely be top contenders in the Challenge Mode season, and you do have a unique Feat of Strength to record your accomplishment in Mists. That said, we clearly should have settled these questions sooner, so as to better set expectations.

Chilton has taken to the forums once more. It appears that once season ends, there will be a new title for those who earned one of the “Challenge Master” feat of strength during the Mists of Pandaria Challenge Mode season! However, the title will NOT be account-wide.

We do recognize the effort and skill that went into seeking and obtaining realm-best times in the current Challenge Mode season. As noted above, the titles were a mid-season addition this time around, and we did not do a great job of setting expectations and ground rules for how they would be handled going forward. Because the competitive landscape was already well-established going into patch 5.4 when the titles became available, setting a record time was particularly challenging, and anyone who managed to set a realm-best time has accomplished something worthy of lasting recognition. We are going to add a new title, Mistwalker, which will be awarded in patch 6.0 to any character who earned one of the “Challenge Master” Feats of Strength during the Mists of Pandaria Challenge Mode season (this title will not be account-wide).

The dungeon-specific titles will still be removed in patch 6.0 as previously announced. As setting record times for a fresh slate of dungeons will not initially be nearly as difficult (by definition the first group to complete a given Challenge Mode in Warlords will have the best time on their realm), we will not be awarding any permanent titles for setting record times in Warlords. There will be a new set of dungeon-specific titles for Warlords Challenge Modes, which will indicate the current record holder(s) on a server, and which will be removed if and when that Challenge season ends.