Blizzard Entertainment and Mike Morhaime Make a Stand for Kindness 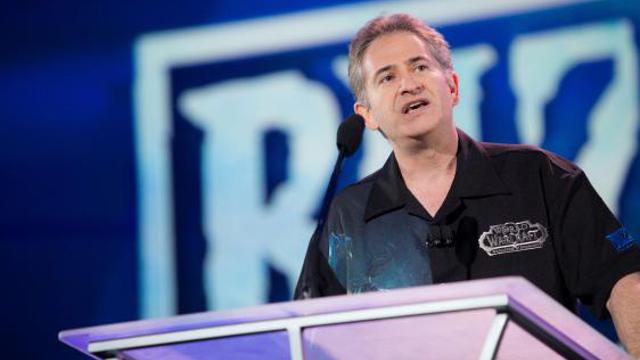 At BlizzCon 2014, Blizzard Entertainment emphasizes the importance of kindness in the gaming community.

Blizzcon 2014 has come to an end and has hopefully left many with a new sense of pride and excitement for the future of Blizzard Entertainment. But it was the message during the Opening Ceremony that set the tone for the entire convention from Blizzard Entertainment President and Co-Founder Mike Morhaime, as he chose to talk about something serious:

Over the past couple of months, there’s been a small group of people who have been doing really awful things. They have been making some people’s lives miserable, and they are tarnishing our reputation as gamers. It’s not right.

Morhaime was very careful by not calling out any specific group for the vitroil behavior in gaming community, though several have filled in the gap. It isn’t just about one individual group, but making a more positive change for the better, starting with one of the largest game development companies.

Not only did Blizzard reveal a new IP after 17 years, but they kindled a new direction for gaming. When Overwatch opened with an amazing cinematic trailer, the crowd broke into cheers as a female protagonist (Tracer) graced the screen in non-revealing fantasy gear.

The world could always use more heroes. – Tracer

Tracer’s words ring loud for those wishing for a better gaming world. It takes the individual to take a stand against the wrongness within the community. And the entire Blizzard company is setting an exemplary standard.

While Overwatch won’t be the perfect answer for some, this is Blizzard’s way of removing the barrier between female and male characters and subverting the typical stereotypes for women in games. It is truly an act of heroism.

The important thing here is that Blizzard is trying. Creative Director Chris Metzen discussed how he and his daughter were watching the final cinematic for World of Warcraft: Cataclysm at the end of Dragon Soul. Her response:

It’s cool, but why are they all in bikinis?

Her simple question had caught him off-guard, and made him realize what kind of message the company was giving to women.

And they are going one step further with Heroes of the Storm. Toxicity and leavers will no longer be tolerated in the MOBA. In early Alpha, testers were already receiving kicks from the game, but now rage quitters will be paired with others until they complete matches to have the mark removed.

Though gaming is now part of the mainstream culture of everyday life, its roots are still a refuge for the downtrodden to find solace among fellows. Games are a chance to be the hero against an overpowered enemy–to bask in glory, riches, and fame. But many have forgotten that we were the bullied, the repressed, until we banded together.

This is not going to get better until our communities become self-policing against harassment as an acceptable form of behavior.

Already, Blizzard Entertainment has been making a vocal stand on gender, racial, and general hatred towards differences in the gaming community. It is clear that going forward, the company will only continue to be the representation for all other video game companies and fans alike.

As Morhaime said during the BlizzCon Opening Ceremony:

Let’s carry the good vibes from this weekend out into the world all year round. […] Let’s take a stand to reject hate and harassment. And let’s redouble our efforts to be kind and respectful to one another. And let’s remind the world what the gaming community is really all about.