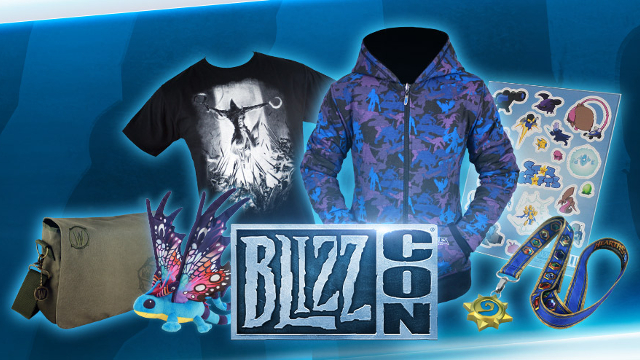 Blizzard Entertainment fans who hold a real or virtual ticket for the convention have early access to the merchandise that will be sold at BlizzCon 2014. The sale is now underway until November 11th and fans can score some pretty sweet looking gear.

Hordes of blacksmiths, drones, and goblin engineers have been tirelessly working on a treasure trove of epic new items to debut at BlizzCon 2014, and the first results of their labor are available for purchase now. The store is stocked with some epic never-before-seen loot, along with some of your favorite items from BlizzCons past.

To access the BlizzCon sale, head over to the Blizzard Gear Store (gear.blizzard.com) and click the BlizzCon Sale banner. In order to enjoy the spoils, be sure to log in to a Battle.Net Account that is flagged with BlizzCon 2014. Get a glimpse of what is in store so far through the BlizzCon Facebook page gallery.

For those who are going to be on the convention floor, your BlizzCon ticket contains a BlizzCon Digital Bonuses Code. That code will grant access to all digital bonuses including this year’s in-game goodies, BlizzCon Virtual Ticket, and this pre-BlizzCon online merchandise sale. This code can be redeemed at any time at www.battle.net/code.

And more will be revealed on November 7th, the first day of BlizzCon in Anaheim, California. From the looks of the sneak-peeks, there is at least five new items. The first shadow appears to be a Funko Pop! Vinyl Deathwing from World of Warcraft, a new bust statue of one of the archangels from Diablo, (hopefully) a new murloc, and what appears to be a spiny hoodie with the outline of Diablo himself.

Again, these items will be revealed on November 7 once the convention floor is open for the public and the event has kicked off. The online sale ends November 11 for those who hold either a virtual or real BlizzCon 2014 ticket. Supplies are limited and all orders will be shipped upon receipt—so the sooner you order, the faster you’ll get your BlizzCon gear!