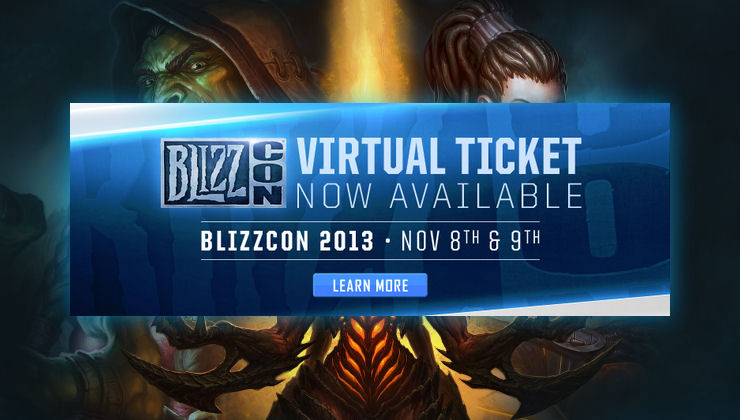 If you missed out on snagging a BlizzCon Ticket or prefer to watch it from the comfort of your home, Virtual Tickets are now available!

According to the BlizzPlanet and to the date of this post, we have 56 days until Blizzard Entertainment‘s BlizzCon in Anaheim, California. Tickets went on sale back in April. Whether you missed out on the opportunity or prefer to watch it from the comfort of you home, the Virtual Tickers for BlizzCon are now available now!

Now you can be a part of Blizzard’s epic two-day gaming convention without having to wear pants—unless, of course, you’ve invited friends over to watch. – BlizzCon

The BlizzCon Virtual Ticket will give you access to online HD live coverage of the two day event on November 8-9, 2013 at the Anaheim Convention Center. You’ll get access to both days of the show via two exclusive channels, including the developer panels, exclusive interviews, community contests, and the closing ceremony, along with on-demand replays and DVR functionality. Note that Virtual Ticket coverage will be available in English language only, so keep that in mind before you purchase. 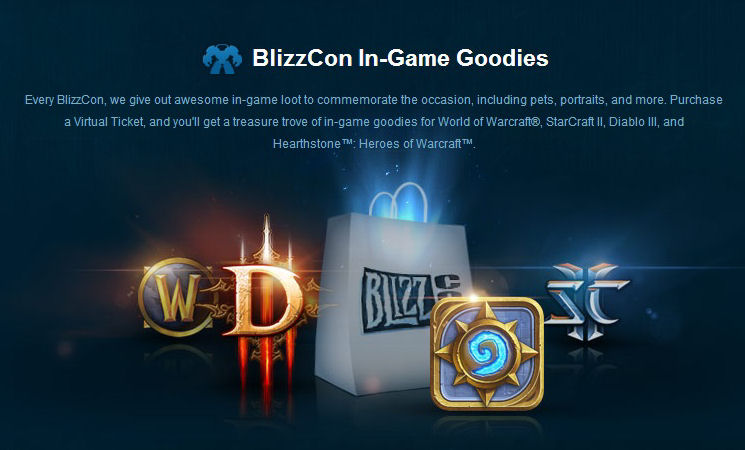 Even if you can’t be part of the action, you’ll still get the chance at some of the epic loot with exclusive in-game goodies from Diablo III, Hearthstone: Heroes of Warcraft™, StarCraft II, and World of Warcraft®. You’ll also get exclusive, limited time online pre-BlizzCon merchandise sale featuring a selection of commemorative items that will be available for purchase at the show five days early.*

*While supplies last. All orders placed in the online pre-BlizzCon merchandise sale will be shipped from the United States; international shipping rates may apply.

You can witness the craftsmanship, skill, and creativity on display in the new and improved Talent Contest and Costume Contest. It will be hosted by comedian Jay Mohr. Don’t miss out on the contest night and cheer on your favorites.

And probably the most anticipated part of all of BlizzCon is the closing ceremony. We still don’t know who will be playing for this legendary event, but it the previous list of bands is anything to go by, it will be epic.

Even if you don’t purchase the Virtual Ticket, you will still be able to catch plenty of the BlizzCon action online for free. Coverage of the BlizzCon opening ceremony and this year’s BlizzCon eSports tournaments. This includes the StarCraft II World Championship Series Global Finals and the World of Warcraft Arena Global Invitational. This will be streamed for free in HD on the BlizzCon site and the official WCS website.