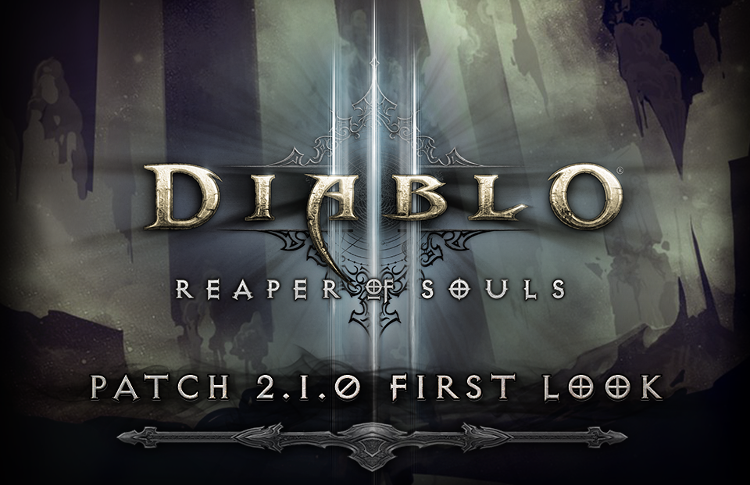 There are many changes that will be going into Diablo III: Reaper of Souls Patch 2.1.0 such as class balance and new features. However, the below information is only a preview of what is currently in the works. Again, this is just a preview and a more detailed update on Patch 2.1.0 Notes will available at a later point.

Those who played Diablo II will remember the Ladder system that was available. In Diablo III, Seasons will offer players a change to start a fresh, level 1 characters and artisans. Participants will earn exclusive rewards and unique Legendaries. Not to mention climbing the Leaderboards, completing achievements, earning Conquests, and running Greater Rifts.

A Seasonal Hardcore Crusader gets ready to hop into the action

A full overview of your Seasonal characters will be available in your Character Profile.

Each Season, players will be earning Conquests. But what are Conquests?

Conquests are special Season-only achievements (offered in addition to the suite of non-Seasonal achievements already available in the game) that represent a variety of challenging goals. These goals can vary in terms of gameplay and difficulty, and some might be easier to complete than others. With tasks ranging from killing Malthael at level 70 on Torment VI to finishing Acts I-V in an hour or less, Conquests are designed to encourage and promote an array of different playstyles.

Except these will only be available for the first 1,000 participants to complete a Conquest within the Season and will be immortalized in the regional Leaderboards. Currently, there could be 10-15 unique Conquests per Seasons, and each Conquest will have its own Leaderboard.

Conquests will also provide achievement points and will count toward your Seasonal point total. These points will be provided regardless of whether your character placed in the regional Leaderboard.

As the Seasons conclude, the Seasonal Legendaries will be added to the non-Season loot tables. Also, Greater Rift leaderboards will be available to non-Season characters. You can then progress with your friends and clanmates on your more veteran heroes. 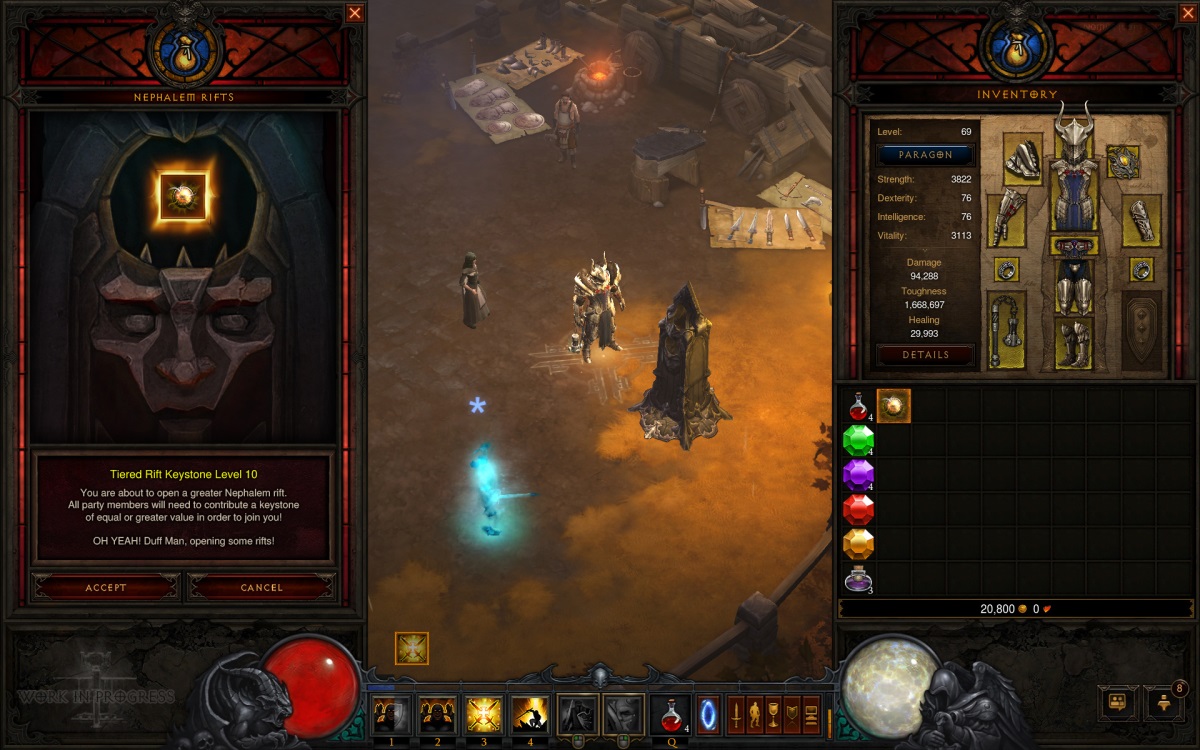 Entering a Greater Rift requires its own type of Rift Keys.

While Greater Rifts are a type of Nephalem Rift, there are some key differences between the two features. In Greater Rifts:

You’ll race against a clock to fill a progress bar by accruing monster kills.

Most monsters do not drop loot; rewards have been completely shifted to the Rift Guardian.Monsters grant differing amounts of progress for your progress bar; the tougher the monster, the more they fill up your progress bar.

You cannot resurrect at your corpse or in town while in a Greater Rift—only at the last checkpoint.

You cannot use player banners or the Teleport option if the target player is in a Greater Rift.

If you complete a Greater Rift before time expires you’ll advance to the next difficulty level. Should your time be exceptionally good, you might even skip a few levels! If time instead expires, you’ll have reached the end of your current Greater Rift journey and your best results will be posted to the appropriate Leaderboards. 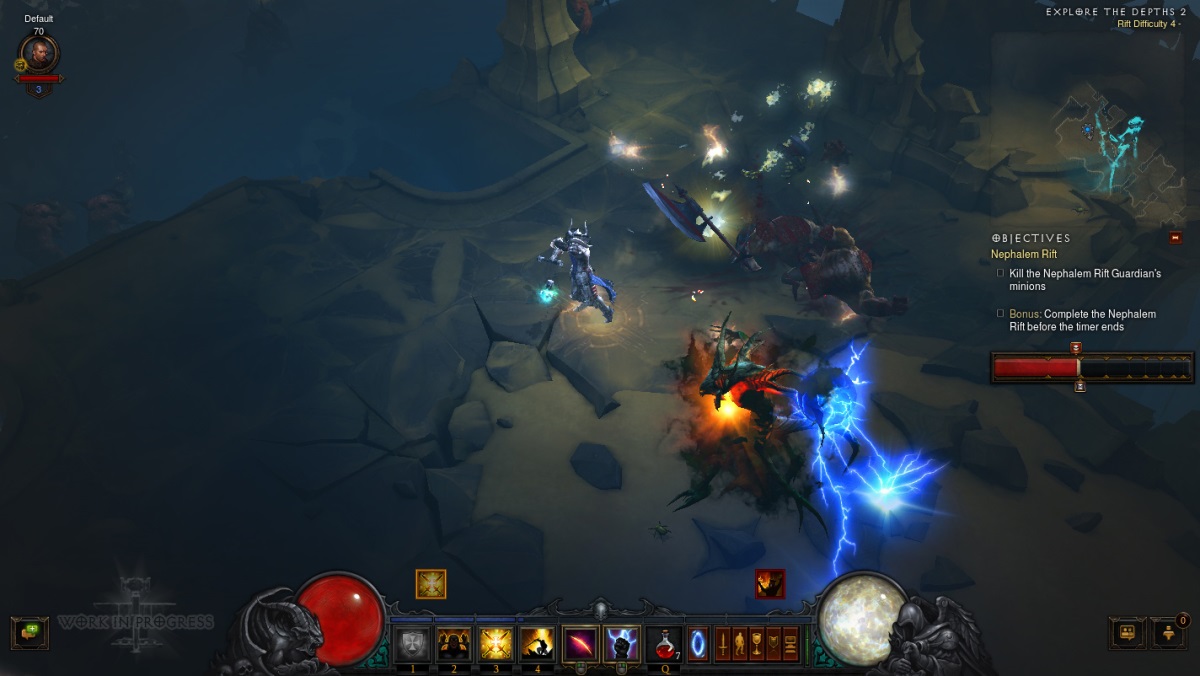 The rewards for completing the Greater Rifts are unique and upgradeable incentive–Legendary Gems. Currently, these gems are undergoing significant iteration and won’t be available on PTR.

The gist is that these gems are infinitely upgradeable, and provide special Legendary powers when socketed into the appropriate gear slot. They can only be socketed into Rings and Amulets, and can be upgraded by completing additional Greater Rifts. The higher you place in a Greater Rift, the more likely your gem will be successfully upgraded.

Some of the features from Greater Rifts will also make an appearance in Nephalem Rifts–like the completion bar. Also entry mechanics will be adjusted for all Rifts. Players will still need a Rift Fragment to enter Nephalem Rifts, but the cost will be reduced down to one Rift Fragment per character.

The biggest feature coming to Diablo III: Reaper of Souls are Leaderboards, a quick way to measure progress. 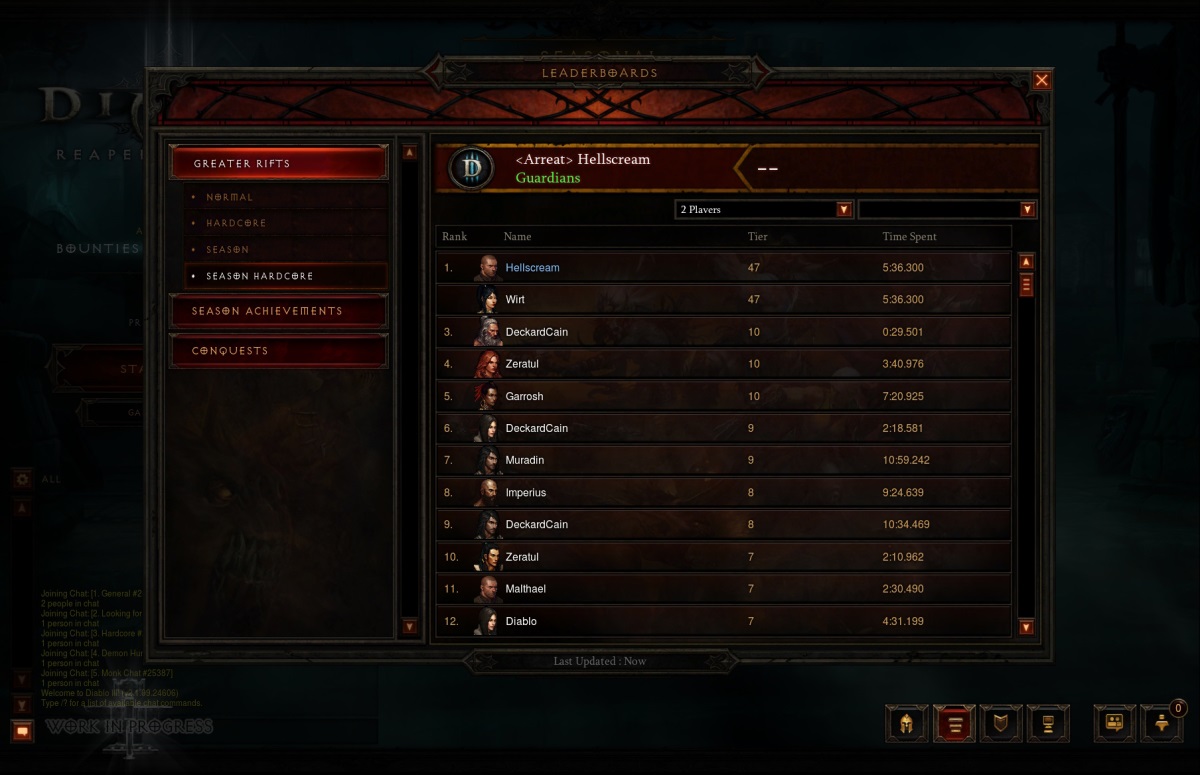 Each class will endure scrutiny and changes in the new competitive features on PTR. But players will have to wait for the more detailed Patch Notes to be released to see just what will be happening to their favorite hero. For now, there are some mechanics that haven’t been performing as intended.

A major change is coming to Dexterity to benefit Demon Hunters and Monks. Each point of Dexterity will grant 1 point of Armor instead of Dodge chance. Dodge isn’t as reliable as Armor or Resistances and doesn’t protect you from some of the most dangerous monster affixes like Plagued or Thunderstorm. In light of this buff, the existing passives that grant 30% of your Dexterity as Armor (Seize the Initiative and Awareness) will be completely redesigned.

The next change will be to Healing. Currently, Healing provided by gear isn’t very valuable because you receive the vast amount of your healing from Health Globes. During internal testing, we discovered that as you reached higher Greater Rift levels, you really wanted more of your healing to come from your gear in order to survive. To facilitate this, we are reducing the amount of healing Health Globes provide, but buffing Life on Hit and Life Regeneration on gear to compensate. This change should make a more consistent experience when you turn up the difficulty (or reach a higher tier in a Greater Rift) in situations where you’re not killing as quickly and actually require the increased Healing.

While Greater Rifts and Seasons will encourage players to return and aid in Diablo III‘s replay-ability, this patch will all provide new content for Adventure Mode exploration.

Originally designed as the sewers of Westmarch, we weren’t quite able to include the Cesspools in the list of playable environments in Reaper of Souls by the time the expansion launched.

Still, we loved the look and feel of this festering, dank underworld and we’ve spent some time polishing it up for use in Nephalem Rifts and Greater Rifts. You’ll have a chance to spawn Cesspool levels while in a Rift, and we hope you enjoy this new randomized landscape!

Expect to encounter (and slaughter) a variety of creatures in the Cesspools!

Slaughter and mayhem in the Cesspools.

Patch 2.1.0 isn’t live on PTR just yet, but it will be soon™! Players make sure to share your thoughts and feelings with the Diablo III team as you test out the new competitive features–helping squash bugs along the way by reporting them!