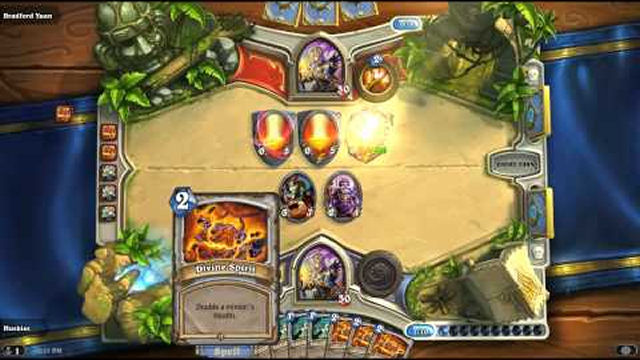 We always knew someday that Lorewalker Cho would become the ultimate boss! Over 1 billion in health in a single duel!

Husky Starcraft pre-plans a friendly match in Hearthstone: Heroes of Warcraft™ after fans pointed Sinvicta in the direction of the Lorewalker Cho legendary minion card done by Noxious. A perfect opportunity to find out the limits of a minion’s health in beta. Let’s break down the card choices to reach this huge feat.

Lorewalker Cho is a legendary minion with the ability that whenever a player casts a spell, it puts a copy of that card into the other player’s hand. This card would be great to have against high spell card decks. The downside is that when you play spell cards yourself, they will appear in your opponent’s hand. This card has the possibility of maxing held cards making the next drawn ones to be destroyed. It is a tricky card to use.

Power Word: Shield is part of the priest basic cards that you unlock as you level up the hero. This card allows you to give a minion plus three health. Not a very powerful card by itself, but great for using in combo with its low mana crystal cost.

Divine Spirit is another basic ability card that you unlock by playing the hero class priest. This spell allows you to double a minion’s health. Some may use this card to help boost a taunt minion or in conjunction with Lightspawn which has an equal attack to its health. I’ve seen this used in combo with the Power Word: Shield being played first before Divine Spirit.

Now, these card by themselves are nothing amazing, but with their powers combined…

Which brings us back to Husky Starcraft and Sinvicta buffing up the health of Lorewalker Cho. Who knew that your beneficial ability cards could be played on the opponent’s, but that was exactly what Husky Starcraft did to Sinvicta’s Lorewalker Cho with Power Word: Shield and Divine Spirit.

With four Divine Spirits being used back-to-back, it is possible for Lorewalker Cho to soar into a World of Warcraft boss health pool. But there was a limit. If only Inner Fire had been played for a large critical damage before the end.

Do you think the choice to buff up your opponent’s minions will make it live? Will Lorewalker Cho continue his career as world boss?