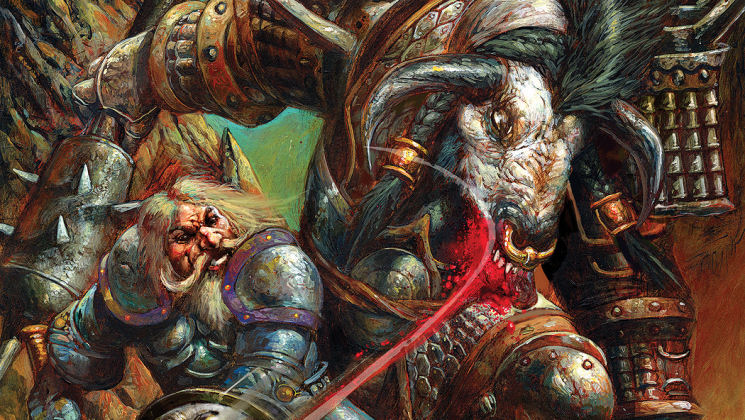 The hotfix every arena player in World of Warcraft has been waiting for is finally live on the servers. Say good-bye to The Crowd Chose You!!! and hello to Dampening.

When the World of Warcraft PvP Season 14 started, a new change to the arena was implemented to counter the dragged out matches. The Crowd Chose You!!! seemed to have been the answer to the problem.

This mechanic was added to suit two primary goals: keep the game from dragging on too long, and make sure matches always end with one team declared the winner. However, we wanted something that wouldn’t make players feel they needed to change how they played the game. Unfortunately, the implementation of The Crowd Chose You that went live with Patch 5.4 is not filling that last requirement. (Source)

Sadly, the nature of players was to change the way they play to work in favor of gaining the buff as stated by Community Manager Lore. Since it didn’t seem like an easy mechanic adjustment to The Crowd Chose You!!!, a completely new stacking debuff was in order.

Yes, Death Knight teams have been the rage in arenas. With how The Crowd Chose You!!! buff worked, Blood Death Knight teams were almost always guaranteed to gain the buff because of their large health pools and self-healing. Now the concern is that this change still won’t affect that team composition.

Let’s take a look at just what the spell description is for Necrotic Strike for those who might not have played a Death Knight recently. 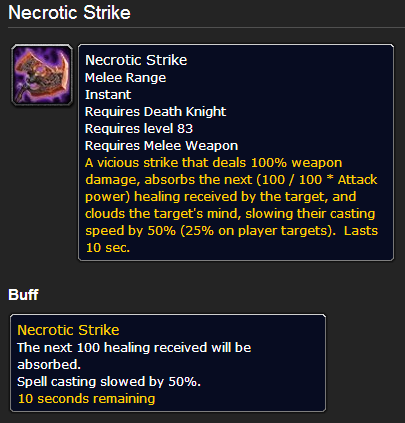 Currently, the argument on the forums is that this ability is double-dipping because of the healing and damage absorption reduction from Dampening. The primary concern is that Necrotic Strike could be constantly applied so the healing absorption doesn’t drop or it somehow rolls into a magical snowball effect.

But the counter-argument makes perfect sense. What Necrotic Strike doesn’t deal in physical damage, it makes up for with absorbing heals. And since this is more of an offensive ability than a defensive–and doesn’t exactly help the Death Knight stay alive–it makes a bit of sense as to why it was exempt.

But Lore took to the forums to explain the reasoning why Necrotic Strike was exempted:

After some discussion, we came to the same conclusion. Necrotic Strike’s healing absorb is no more or less difficult to heal through than actual damage. You deal with it in the exact same way: by healing the target. To put it another way, Dampening is intended to slowly lower healing output, while the amount of healing needed stays the same. To that end, we think leaving Necrotic Strike unaffected by Dampening is the right call. (Source)

Depending on the build and whether or not the Death Knight player is paying attention to their Death Runes, Necrotic Strike can be used four to six times in a row. But saving them can be difficult in arena as you need them for pressure or crowd control. The absorb does indeed stack with one another, but the debuff is only 10 seconds long. It would require a Death Knight to gain another Death Rune quick enough to add to the debuff.

And as stated, the issue with The Crowd Chose You!!! was primarily with Blood Death Knight’s self-healing on the forums. If there is in fact an issue with Necrotic Strike, I feel that would be in the ability itself and not if it is included in the Dampening arena effect–same would apply for Blood Death Knights. Thankfully, Blizzard is keeping an eye on this as they move forward with this live implementation.

There were a few other class ability woes that were raised, but Necrotic Strike was the primary concern due to the fact that it was going to be considered under the Dampening debuff. Some of the other issues had nothing to do if they would be affected by the new arena change or not and more a worry for future play-style exploiting.

Probably the second unease on the forums was for rogues (and similar classes) and their ability to remain cloaked in stealth for so long until the Dampening debuff reaches quite a few stacks before applying pressure to the enemy. While stealth composition teams can be frustrating, the likeliness of this actually being successful is rather small.

Quick update: several of you have expressed a concern about stealth teams staying hidden until late in the game, when Dampening starts to stack. This would require them to grab Shadow Sight orbs as much as possible, which would be tricky but is actually possible (particularly with mechanics like Vanish).

We’re not totally sure it would be a problem, as it would require quite a bit of skill and more than a little luck to pull off, but we do see the concern and want to avoid promoting that sort of behavior. So, when the Dampening change goes in, we’ll also be changing the Shadow Sight debuff to prevent the player who picks up the orb from using stealth mechanics while it’s active. That will also include abilities like Vanish or Shadowmeld. (Source)

Currently, the fix for this concern has not been implemented into the live game just yet. Right now, it is undergoing testing.

In addition to that, there is a hotfix that’s currently undergoing testing (not ready yet) that will cause players picking up a Shadow Sight orb to receive a Faerie Fire effect. (Source)

This change will only affect players who pick up the Shadow Sight orb. Opponents could still crowd control a stealth player into these–though it isn’t widely used as much anymore.

Do you agree that Necrotic Strike shouldn’t be affected by the Dampening debuff? How do you feel about the changes coming to Shadow Sight orbs? Any other concerns you have about arena balance?