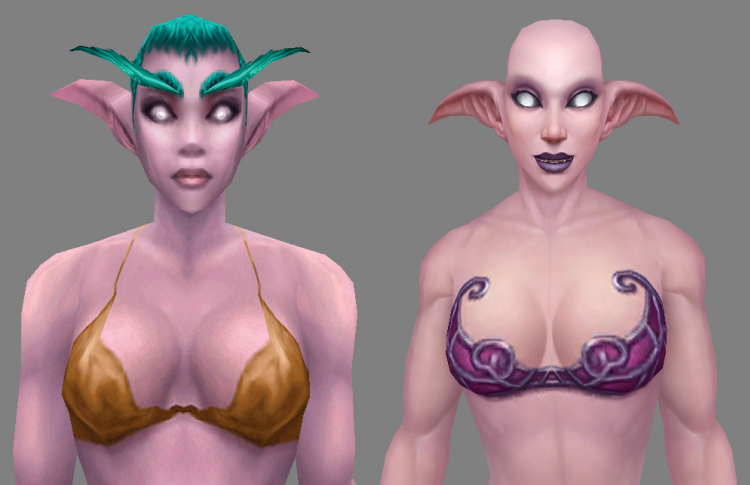 Datamined female Night Elf model scrapped and back on the drawing board!

Before the female Draenei model was revealed by Blizzard Entertainment, the female Night Elf was circulating the forums. She was reportedly datamined from the Warlords of Draenor alpha game files in all her bald glory.

Yes, she is bald. That was generally the main issues most players couldn’t seem to get passed — her lack of hair. But others saw several of her other flaws. “She was too toned, her teeth were too pointy like a vampire, her ears moved too much,” etc., etc.. You be the judge of it.

Personally, I didn’t mind her one bit. Baldness, the muscle tone–I didn’t even notice her vampire fangs in the Whirlwind shot. And I have very little love for Night Elf models. But I couldn’t get it out of my head that she looked a lot like Dobby from Harry Potter and Fester Addams from the Addams Family.

Datamined NE Female model is a VERY old version of her revamp, right before we scrapped most of it and went back to drawing board.

We're still iterating on her, and the current version addresses most of the concerns that have come up. I apologize for the confusion.

Yes, she is back on the drawing board. Though I hope they keep some of her muscles intact. Remember, that when seeing datamined information on Warlords of Draenor is not always the “gospel truth” and should be taken with a grain of salt. Hopefully, the female Night Elf will be in ArtCraft’s future soon™!