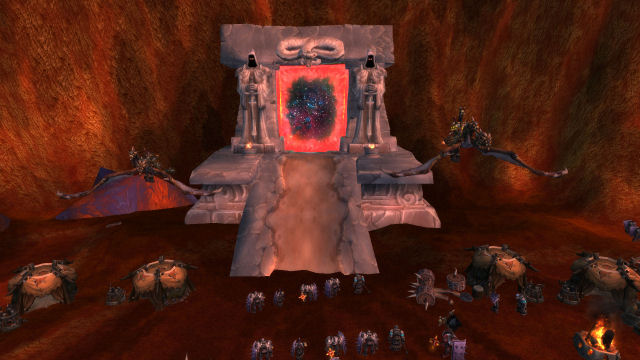 Battle against the Iron Horde Invasion during World of Warcraft Pre-Patch 6.0.2 until the Warlords of Draenor release!

Warlords of Draenor is roughly a month away from launch and that means Mists of Pandaria comes to a close. Pre-Patch 6.0.2 brings an end to quite a bit of content, but also brings new changes for World of Warcraft players. The Iron Horde has begun to pour through a now red Dark Portal and heroes must head to the frontlines.

Blasted Lands has level 90 content that can be switched back to its former 50s similarly to Theramore. Players can simply speak to Zidormi and the zone will be returned to its previous glory, pre-sacking and all. So fear not that the nostalgia will be gone for good now with the portal swirling blood red.

The Dark Portal now will take players directly to Hellfire Peninsula and new portals for the Blasted Lands will be available. These new portals will drop players off near the Shattered Beachhead in Blasted Lands.

Additionally, new flightpaths will be available as current ones will be inaccessible. Those pesky orcs have taken out all the flightmasters and are ruthless rulers of the skies on their Iron Chimera mounts.

With Nethergarde and Okril’lon now in the possession of the Iron Horde, the heroes of Azeroth will need to rush to reinforce their comrades trapped behind enemy lines. Players will land on the beach front, fight their way to gather a report on the enemy’s movement, and eventually take out the commander of the first strike.

Players who battle it out in the Blasted Lands during the Iron Invasion will earn a unique title. Also reporting to their leader will reward them with their very own miniaturized Iron Starlette battle pet. But the Iron Horde Invasion has ventured deeper into the Eastern Kingdoms to the last stand of the Horde roughly 30 years ago.

Players have been facing off against Rend Blackhand since Upper Blackrock Spire (UBRS) was included in World of Warcraft. Finally, Rend is officially dead and will no longer be resurrected with each instance reset as with Patch 6.0.2, UBRS has received a facelift.

Now until November 13th, players will be able to face off against the first three bosses in UBRS at level 90. All loot will be roughly equivalent to Flexible (now Normal mode) Siege of Orgrimmar raid gear. Once Warlords launches, UBRS will be a level 100 dungeon with all bosses unlocked.

Currently, players will not be able to access the new UBRS through the portal since it will be set for level 100 access. That means they will have to use the new Group Finder tool to port into the instance–much like Holiday instance events.

Remember that this event will only be available until Warlords of Draenor launches on November 13th. Face off against the Iron Horde and push them back through the Dark Portal to gain a foothold on the new alien land of the past.