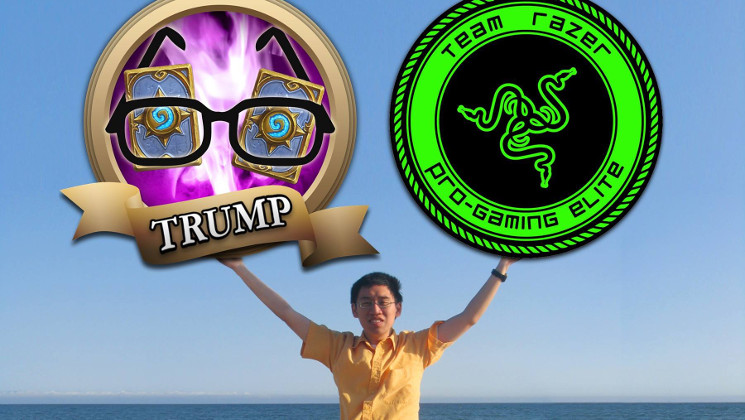 Today is a big day in the possible future of eSports for Hearthstone: Heroes of Warcraft! The first professional Hearthstone player,Jeffery “Trump” Shih, was signed on today with Team Razer, one of the big eSport supporters.

Streaming @PlayHearthstone for the first day under the @Teamrazer banner! Come see some arena action. And welcome Razer to valuetown!

The partnership signals the first official dedicated Hearthstone player to be taken on as a professional by an organization, and is aimed at both supporting and growing what is already an incredibly promising game and community. (Source)

According to Trump’s FAQ on his Twitch channel, he has been playing Trading Card Games since Magic: the Gathering Invasion in 2000. He was active with that card game for thirteen years and played a high level.

After Blizzard announced their digital Collectible Card Game, Hearthstone, he made it his goal to become one of the leading figures in the game as a player and personality.

Trump is best known for running an informative and educational stream, where he takes on viewers to help them learn from his progression throughout the game. He takes the time to explain everything.

Now he will be equipped with a full range of Razr gaming hardware not only for his fan competitions and giveaways, but will be in action at the BlizzCon Hearthstone Innkeeper’s Invitational next month at Anaheim, California.