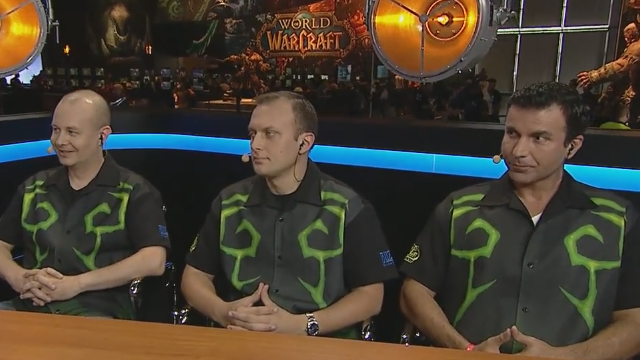 Gamescom 2015 has come to a close, and with it, the final panel with Blizzard Entertainment. On August 6th, the development team announced the next expansion for World of Warcraft. We shared everything about Legion during the live stream event.

The development team has been working diligently on Legion alongside Warlords of Draenor. During BlizzCon 2013, Senior Vice President of Story and Franchise Development Chris Metzen had stated that the next 5-6 expansions were already in the chamber.

Questions have been taken directly from the stream.

Question: One of the big questions that has been made was, where are we in terms of the world? Are we in the current Azeroth or are we once more in an alternative reality?

Alex Afrasiabi: We are absolutely in our Azeroth, our current Azeroth. It’s extremely important to fight off the Legion in a world that we care actually about, right? Definitely that.

So did Archimonde sent Gul’dan over there, yes? If so why?

AA: Yes[…]. It’s the integral, kinda of the core story of us as Azerothians. Why is it [that] the Legion continues to try to take over this world, to destroy this world? That’s something that I don’t want to get to spoilery, but it is a story that unfold and as we go and quest and play through the Legion expansion.

When we first saw that cinematic and saw Gul’dan he was pretty happy see Illidan, why was that?

AA: I think Gul’dan is under orders and he’s got something to do, he’s got plans that he has to fulfill. And I think Illidan is a really, really important part of those plans.

Speaking of which by the way, I think people really want to know: is Illidan the bad guy here in World of Warcraft: Legion or is he on our side? If he is on our side won’t he have some kind of resentment of the past?

AA: Illidan is probably pretty pissed off. We put him down, and then now we’re trying to find him to have him help us, potentially. And who knows how he’s gonna react. If we ever get in touch with him or when we get in touch with him, I imagine he’s gonna have some words for us and we’ll see how that unfolds again throughout the expansion.

Now you’ve mentioned during the release that we will be battling the Legion in the Broken Isles, how’d the Legion get there?

AA: 12,000 years ago there was a festering wound in the land. And the ancient highbourne nightelves at that point in time had access to all five Pillars of Creation. And that is what they actually used to seal up that wound and on top of that wound they built what could be their temple of Elune—this grand temple. That wound has now been opened and that festering fel energy is now shooting out, sparking out, and just pouring infinite numbers of demons out into our world. So that’s a big deal and we need to stop that.

One of the things that you’ve mentioned when you introduced the expansion and all the new zones was Dalaran. Is Dalaran, which is currently in Northrend, is that only just casually flying over to the Broken Isles?

Tom Chilton: Conceptually, it is. Conceptually it is moving from Northrend over to the Broken Isles. But of course the Dalaran that players have there in Northrend right now they’ll still have as they’re leveling up from 70-80. We use each expansion as a period of time and of course if you’re leveling there you need Dalaran to be there. 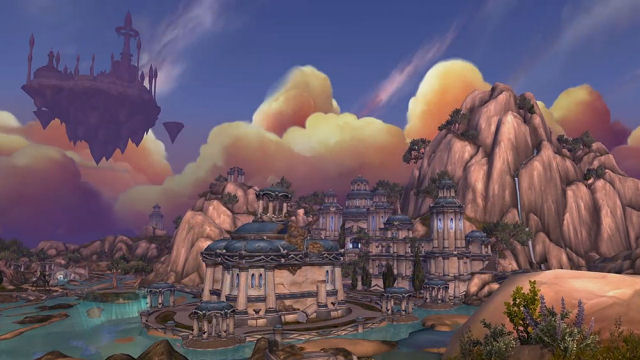 But the one that we have at the Broken Isles is conceptually the same Dalaran. It’s been updated a little bit so there’s some changes to some of the locations within Dalaran itself, there are changes in the Underbelly, there’s some texture updates. We combine all that and still have a lot of the same nostalgia that it did before with a lot of the same functionality.

With the new area and the new continent, I think what people really want to know: can I fly to this new continent, the Broken Isles, by myself or do I have to take more conventional routes similar to how I was in Warlords of Draenor for example?

Ion Hazzikostas: Eventually yes, but not right away. And I think that’s consistent with the philosophy we laid out in our Dev Watercooler blog post[…] where we said our solution for Warlords was a template that we could see applying going forward. And we’re going to be enabling flying in the very near future in Warlords. And we think that strikes a good compromise between allowing the ground based gameplay to shine as people initially start to explore the world but then allowing people who have achieved and completed the content to take to the skies and then experience it from an all new perspective.

One thing we are going to do in Legion is, starting in 7.0, the first steps of the achievement to eventually unlock flying will be available so players can start working towards it and get a sense of what it is going to require.

So these Artifacts, how will they play a big role here in the expansion? And then moving forward, what was the progression as we go through the content?

IH: They’re your companion, your most trusted ally as you work your way through Legion and fight the Burning Legion themselves. It’s going be one of the first things you do. You start off the expansion, then you will claim your Artifact and build it up from there. There’s two separate progression paths. Artifact Power that you earn and spend on traits that we mentioned in the presentation.

A part that didn’t get mentioned is sort of the DPS throughout item level of your weapon itself. And that’s going to be derived from powerful relics that you will obtain through “traditional sources”. You can socket those to your weapon and those will increase its damage, its spellpower. And they also interplay and modify some of the traits that you have socketed as well.

That is going to take the place of traditional weapon drops that you would normally get from quest rewards and dungeons. There will probably be some [weapon drops] early on for catch up purposes, beyond the very early level-up zones, it’s not something that we expect to see because you should have your Artifact.

And that is going to be the thing that you progress. But through these relics that you get, you’re still going to have the core experience of leveling up and getting a stronger weapon that just hits harder. And that way when you kill a Mythic raid boss, it’s going to drop a way more powerful relic than what you would get from a Raid Finder boss or a quest from the world.

What about duel-specs? How are the Artifacts working with that?

IH: We want to make sure that it’s not a multiplicative additional amount of effort to maintain multiple Artifacts. You’ll start out with one single artifact, but pretty shortly after that you’ll have the opportunity to go out and earn the others if that’s something that you care about and you want to do for your character.

And then from there, we have some catch up mechanisms in mind that in general make it much easier and faster to get your second and/or third Artifact up to speed and to the same power level as your main one. The one part that won’t directly carry over are the relics. There you would need to earn separate relics for the additional weapon, but that’s not very different from today.

TC: Professions are definitely something we focused for on this expansion. We got a lot of feedback that players felt like Garrisons replaced too much of the profession functionality. What we’ve done is we’ve made a bigger of professions designers than we’ve ever had before, including a designer that has created a quest line for each individual profession.

And then we’re also looking into some systems changes to kind of freshen the system a little bit—it’s been very much the same for a long time now. We’re looking into some updates that will not only improve the UI, but also kind of add new functionality with being able to get expertise in individual recipes. professions focus, feedback garrison replace prof func. Fressing the system a bit, updates, UI improvement, new func, and expertise.

The Demon Hunter class that we considered introducing it during the Burning Crusade but we weren’t comfortable enough adding a new class to the game. The Demon Hunter class has a lot of history both in the earlier Warcraft games through the Illidan character through the Illidari in the Burning Crusade. They’re high mobility, agile class that dashes around the battlefield doing a lot of damage.

What’s the process of designing a new class, especially one with so much anticipation?

TC: What we start with is the fantasy of them and we look at all the inspirations for that class. In this case, it was the Warcraft III introduction with Illidan and then the Illidari kind of look, the whole style of everything. We try to think what is the core fantasy of that class and then identify class mechanics that would really go with that well. We try to prototype them very quickly. Then we go through the process of iterating on, shaving out the ideas that aren’t working, introducing new ideas until we feel like we have a really good package.

Now that we have 12 classes here, will we get a 12th character slot so we can have one of each class on a single realm?

The Demon Hunter has been introduced as one of the classes with a melee DPS as well as Tank spec, very much like the Monk and Death Knight. How different is it from those two other classes? And do those two have to fear for raid spot?

TC: No, they don’t have to fear for their raid spot. The Demon Hunter is different from Death Knight, the Death Knight is heavily armored, slow, very deliberate and has a very different style to it. You could say that the Demon Hunter is more similar to the Monk except that the Monk is a little bit more hybridized—they do use a lot of mobility but they use it to escape and heal up.

Demon Hunter is really all about being more in your face, very aggressive, doing a lot of damage, trying to avoid damage where possible using evasion/mitigation. It really has a different flavor and we’re going to make sure that they all feel very distinctly.

And as far as raid spots go, fortunately we have the advantage of having these scaling raid sizes. We also feel like people that will play the Demon Hunter are also going to be people that would have been playing melee specs anyways. We don’t feel like it will crowd the box around the boss too much.