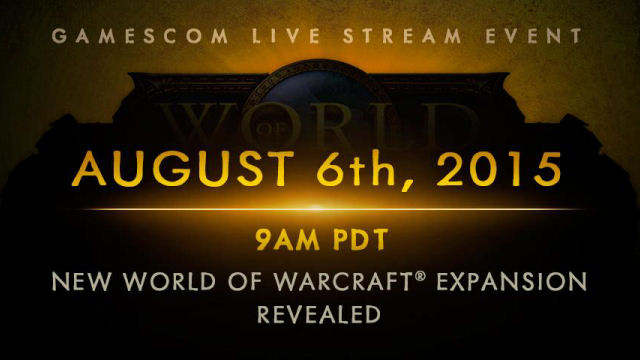 World of Warcraft expansion to be revealed during gamescom live stream event!

Blizzard Entertainment dropped a huge announcement on the future of World of Warcraft. On Thursday, August 6, 2015 at 9am PDT (18:00 CEST) join in on a very special live stream from Gamescom in Cologne, Germany where they will be revealing the new World of Warcraftexpansion!

Social medias are all a twitter about the next expansion for World of Warcraft. Many are throwing in their hopes, prayers, and absurd guesses on where the heroes will go after Warlords of Draenor.

With the way that the current expansion has gone, there honestly is not much that lore-nuts can really pull from. There have been small moments and hints, but nothing substantial to build a foundation upon with good, educated guesses. Based on how Warlords has gone, the most obvious options would be more time and space travel, being stuck in alternate universe Azeroth, or chasing the Burning Legion and Gul’dan.

That’s not to say that Blizzard won’t pull another patch between now and the expansion release that could give a better idea on what will come. But many will already know what to expect since the reveal is less than a week away. If anything, any patch for Warlords will be more of a setup for the next expansion.

But it’s important to remember that many developers have mentioned that neglecting Azeroth’s own timeline could have consequences. We just don’t know which issue it could be.

N’zoth and Azshara are biding their time in the deep sea with a captive Neptulon. Wrathion is determined to protect Azeroth at any cost to the point he began the seeds of the Iron Horde. And there’s still the remaining shamble of the Zandalari tribe and their great leader.

The next expansion could be anything, just so long as it is told well and compels players for the next enemy at large.

Make sure to check back with Blizzard Entertainment’s official Gamescom page for further details. And join in on the live stream announcement August 6 at 9AM PDT.