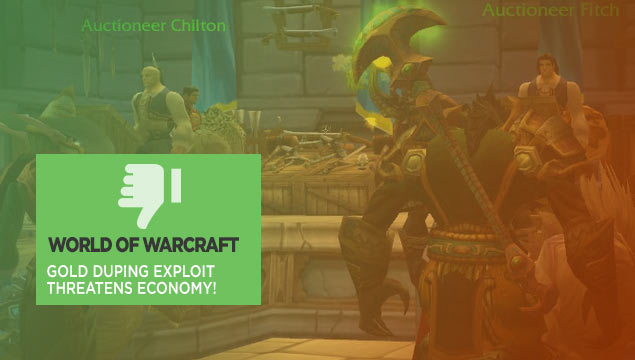 The majority of World of Warcraft players are completely oblivious about an unacceptable economy crisis that happened after the launch of patch 5.3 Escalation! Not one, but two gold dupes occurred a few weeks ago that has affected several server economies in both EU and the US/Oceanic. The issues have since been fixed so it is safe to talk about them, but bans have been rolling out for the gold dupe-exploits.

We here at GAMEBREAKER do not condone the use of in-game exploits. I repeat that fixes have since been applied to the two dupes, so it is safe to explain how the process happened and how the aftermath is still affecting server economies. Let’s take a look at the first, simple gold dupe.

With the launch of patch 5.3 Escalation came a change to pet battle reward bags, other satchels, and bonus loot rolls with a “buff” called Protection of Bad Luck Streaks. This increased the possibility of better rewards each time the player did not receive a battle-stone, gear, etc..

Because of this change, a lot of players were holding on to these bag rewards so they could benefit from the Protection of Bad Luck Streaks. And like most players, a macro was born to help players open up these many bags they had hoarded. Keybind it to the mouse scroll wheel button and you were on the lazy river water ride!

There was a small catch, though. With no global cooldown on the bags, some players were able to open bags so quickly that the game server couldn’t keep proper track. Once this was discovered, players exploited the vulnerability and the lazy river water ride turned into a gold printing factory!

But this lone exploit wasn’t enough to bring a server’s economy to its knees. At the same time, another bug was occurring. 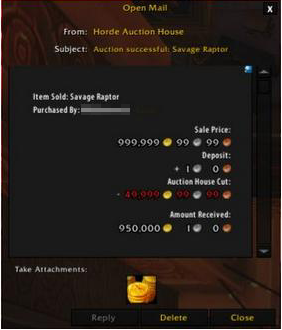 A smart fail-safe that either broke with patch 5.3 launch or was jailbreaked around (I’m uncertain which and there are no details on the how).

Couple that with the loot bag macro and suddenly the gold-capped TCG items are finally purchasable. And this wasn’t done just a few times, but entire rare item stocks on several servers was bought up within the week! But why is this so bad?

Since this fail-safe wasn’t working, players were able to check their auction houses while they were playing their character in-game. But if they made a purchase via the Remote Auction House, their gold was not diminished in-game. In a sense, players were sending duped gold without putting a dent in their wallet, according to the rumor mill.

No Roll-Back, Keep the Change

First, let me explain how some players work the auction houses in-game. Typically, the auction house takes about a 5% cut from completed auctions as a way to apply a minor gold sink and keep the economy as balanced as possible. Goldmakers or traders will bypass this cut by displaying that they have said item in the auction house and selling it at the gold-cap limit while they advertise it in trade chat. Once the trade has been agreed upon, the trader cancels the auction and trades the goods for gold, items, etc. without suffering that cut.

And as I explained earlier, entire rare item stocks were bought up through the auction house. It was thanks to these traders that they noticed a very odd trend and reported it to Warcraft Game Masters. Since the gold was technically dupes, most were concerned that they would lose their earned gold or worse their accounts. The response by most GMs is more startling than several accounts being wrongfully banned, in my opinion.

They got to keep the duped gold. Sounds familiar after the Diablo III auction gold dupe! Eerily coincidental with how close both of these incidents took place. But this is also extremely bad for the servers this gold dupe has affected!

With several gold-cap limits floating around, the economies are in for a major dive bomb that will inevitably take away the “fun” aspect for most traders. Not to mention the extortionate amount auctions will invariably happen since the demand of rare items will rise due to the supply dwindling because they are locked on perma-banned accounts.

There is no word on just what Blizzard will do about the wrongfully bought items or if they will go back into circulation by illegal goldfarm accounts. Do you think Blizzard should re-circulate the rare items in a different manner? Should they have removed all the duped gold from the exploits?

Special thanks goes to Elvine for bringing this news to GAMEBREAKER’s attention!