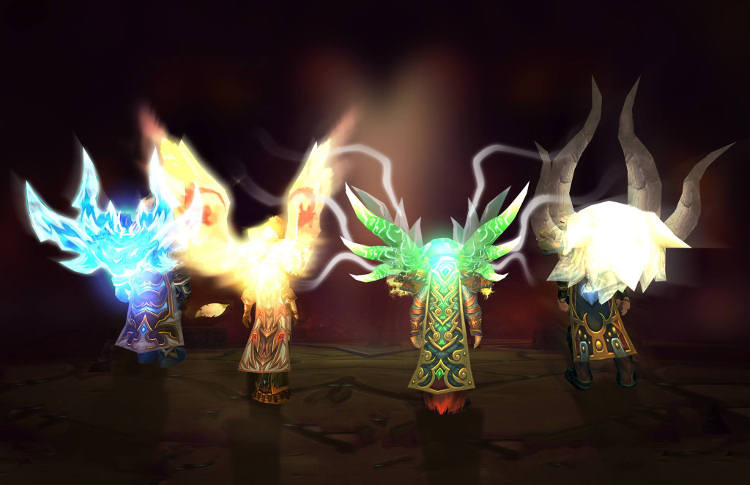 The Black Prince legendary will be no more after Warlords of Draenor launches, but may not be the perfect solution!

Patch 6.0 is quickly approaching for World of Warcraft, the pre-launch patch for Warlords of Draenor, and with it many changes. However, Warcraft players were not prepared for the changes revealed in the extended Gaze of the Black Prince buff.

As a part of the transition from Mists of Pandaria to Warlords of Draenor, we’ll be making some changes to the Legendary Cloak quest line and ultimately closing it out as players head into the new expansion. Once the quest is fully closed, the item will no longer be attainable, and the cloak will become a symbol of the great deeds you’ve accomplished in Mists of Pandaria.

With the release of the pre-expansion patch (6.0.2), players who are not already on the journey through this quest line will no longer be able to begin it. We will also be removing the Test of Valor step with patch 6.0.2 as a part of our transition from using Valor as a currency.

Once Warlords of Draenor launches on November 13, the Legendary Cloak quest line will be gone entirely—the quests and the cloak will no longer be obtainable, and any related in-progress quests will be cleared from your log.

Very few Warcraft legendary items have ever been retired before the start of a new expansion. Only one item has been removed from in-game.

When Naxxramas from Classic was updated to be the first raid for Wrath of the Lich King, Medivh’s legendary staff disappeared. Ever since then Atiesh (now appearing to be owned by Khadgar) has been asked about repeatedly at BlizzCon. But this was simply because of the raid being updated and the quest line could not be preserved between Classic content and Wrath (and made little sense from a lore standpoint).

For the Black Prince’s legendary cloaks, several key quest points will be removed. Warlords will no longer have Justice or Valor Points, removing the goal to collect 3000 Valor Points in A Test of Valor. This will already be removed from the quest line when 6.0 pre-patch is live.

But perhaps the main reason this legendary is being removed from the game is because of the PvP objective–winning both Temple of Kotmogu and the Silvershard Mines. This quest was already a bit upsetting for players, especially those who don’t enjoy the PvP aspect of the game. But those who would want to complete this legendary after the conclusion of Mists would have to face off against higher-maxed level characters in these PvP battlegrounds.

Many will state that this could just as easily be removed from the legendary quest chain, but there are several other parts of it that were already difficult to complete solo when late in the game.

The development team made the easy decision of just removing the quest chain so it was unobtainable anymore. There would have been too many parts of the quest that would have had to be removed for it to be obtainable at the end of expansion.

Like all legendary items before it, players rate their peers based on whether or not they have obtained the item. As a retribution paladin, without the completed cloak or even starting the chain, there was a 20k damage difference between those of the same gear with their legendary cloak. Though this amount seems minimal currently in the race of damage meters, getting the most damage on a boss is crucial for raid teams to defeat them.

This means that guilds looking for new members require recruits to have obtained the legendary cloak. This causes an exclusion for new or returning players who have not begun their quest for it. By removing just the starting quest in 6.0, any who were planning on joining up for the Iron Horde Incursion will be left out completely.

Legendary items have always caused an imbalance in World of Warcraft game mechanics. They are designed in such a way to make players feel more powerful and creates a noticeable discrepancy between those of the same class without it.

Over time, these items get outdated and lose a lot of their power when a new expansion rolls out. Some will even face nerfs because they were designed to be too powerful. None of these items can be transmogrified, they only hold a status level of awe for simply completing them.

The Black Prince legendary was an experiment by the Warcraft development team. By giving all players access to the legendary chain, players couldn’t be left behind unless they opted out of starting the chain. Again, even these legendary cloaks were designed to make players feel heroic.

And this experiment is continuing on with Warlords. Blizzard has learned a few things to include and exclude, such as the PvP requirements for a PvE item. If that legendary item is anything like the Black Prince legendary, we may see it disappearing once the expansion comes to a closure as well.

Though this may not be the answer for legendary items in the future, making them available for all classes, it does solve the large difference when facing meter watchers. The only sure way to make the game-play completely fair, legendary items would have to be marginally better than their lower counterparts epics or their creation stopped.

Hopefully, the Warcraft team won’t feel the need to remove the next legendary so players cannot obtain it after the expansion is outdated.