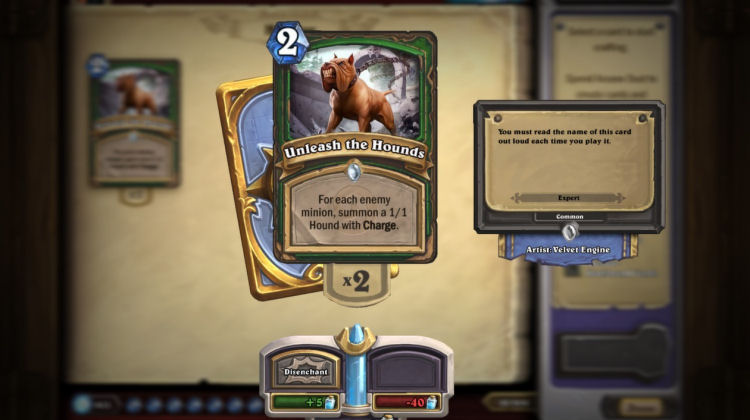 Unleash the Hounds for Hunters will now cost 3 mana crystals, up from 2, in Hearthstone!

The following balance change will be made in an upcoming patch:

“Over the last few months, we have seen hundreds of different decks do well in game depending on many different factors. Our community is incredibly creative, and we’ve seen players constantly trying out new things and coming up with new strategies to counter whatever decks they have trouble with.

At the very highest levels of play there are a lot of different decks performing well, and the decks at the top change from week to week. Since we’ve seen many cards and deck types in the current state of the game rise and fall as players adapt, so we did not want to change Unleash the Hounds immediately. However, Hunter decks have become increasingly more dominant and are doing better than we are comfortable across many levels of play.

We do like the idea of decks that have a really big turn and pull off a sweet combo, but when playing against Hunter decks, you may feel punished too much for playing minions. Playing minions is one of the key, fun pieces of the overall Hearthstone puzzle, and feeling like your options are limited by the opponent creates a play experience that may not be particularly enjoyable.

We take any balance changes very seriously, and we will continue to hold true to our stance that we plan on only making changes to cards if we feel it is completely necessary. After much consideration we have decided to increase the mana cost of Unleash the Hounds to 3. This change should make the card more fun to play against while still allowing for some big plays.”

Unleash the Hounds has been one of the most changed cards in Hunter decks and perhaps even in Hearthstone. Back during beta, Unleash the Hounds used to cost 1 mana and gave all beast minions +1 attack and charge. But the issue with it then was that it could win a game in almost a single turn.

Hearthstone Closed Beta Patch Notes – 1.0.0.4217 completely reworked the Unleash the Hounds card. The mana crystal cost was adjusted to 4 (up from 1) and had its changed to, “For each enemy minion, summon a 1/1 Hound with Charge”. But the mana crystal cost increase caused this viable card to become undesirable.

During Hearthstone Closed Beta Patch Notes – 1.0.0.4458, the mana crystal cost was adjusted once more. The team had intended that Unleash the Hounds be used as Hunters’ own form of AoE and to work in harmony with beast cards, but they saw the cost was too high and lowered it to 2 mana crystal (down from 4).

In an upcoming patch for Hearthstone, Unleash the Hounds will be balanced once more–only this time it is after beta testing. Understand that the team does not want to make too many changes during live unless it is absolutely necessary.

@Malscent We aren't fond of it either, but we will only make changes unless we feel it is absolutely necessary.

Is the mana cost increase the right answer for Unleash the Hounds? Or should they think about reworking the card during Naxxramas closed testing?