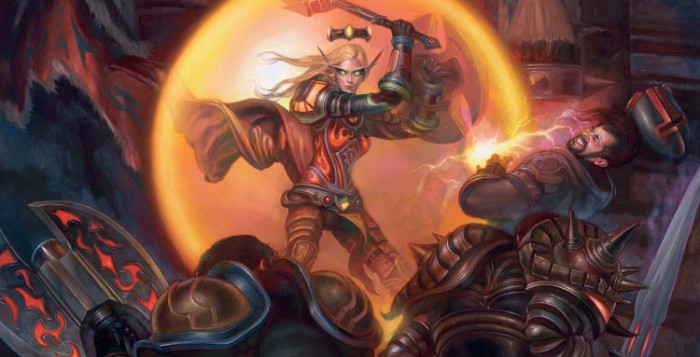 Player versus Player gets some tender loving care in World of Warcraft: Warlords of Draenor.

Last night, World of Warcraft shared the exciting future for Player versus Player (PvP) in the upcoming expansion in the most recent blog. The PvP world will be receiving just as much of a revamp in several design elements as its counterpart PvE and raiding. Find out how you will be Equipping for Battle.

When PvP Power was added to Player versus Player at the launch of Mists of Pandaria, it was highly coveted to have in large quantities. Since it has been changed throughout the expansion, the popularity of PvP Power decreased. This stat, however, did meet its goal in trying to elevate PvP gear to be equivalent to PvE gear in content, but it could be improved upon.

PvP only stats (such as Resilience and PvP Power) will no longer exist in Warlords of Draenor expansion. The team is hoping to make PvP item level (ilvl) be a smart stat that switches when engaged in Player versus Player situations such as arenas, battlegrounds, and that random enemy trying to gank you while questing.

In open world combat, your gear will be equal in stats with most PvE gear items. Players will be able to complete quests or farm mobs without having to switch their gear around. Remember that random enemy try to gank you? Players PvP gear will automatically switch over to the PvP ilvl and give you the upper hand. The question that some PvPers have is how smart or fast this switch will be (Will the player ganking you get one hit without the PvP ilvl increase?).

As mentioned, Warlords of Draenor will be bringing new innovations to the PvP front (finally). One of the biggest improvements in PvP is that loot rewards can be earned. Doing Random Battlegrounds or Call to Arms will have bonus rewards to encourage players to complete the Randoms appropriately. At the end of the match players will be rewarded with Bronze, Silver, Gold Strongboxes, or even all three, but it will depend on how well the team did in the match.

“Take Warsong Gulch, for example. If your faction captured at least one flag before the game ended, you’ll get the Bronze Strongbox. Capture a second, and you’ll earn both the Bronze and Silver. And if you capture all three, not only do you win the game, but you’ll also earn all three Strongboxes. We’ll be restructuring the scoring of other Battlegrounds slightly (such as changing Arathi Basin to end at 1,500 points) so it’s easy to figure out what you need for each Strongbox.”

But what’s inside the Strongboxes? It can be any number of PvP-centric things such as Honor Points, Conquest Points, and yes, even gear. The better the Strongbox, the better reward. Those Gold Strongboxes will definitely be the focus point for many PvPers at the launch of Warlords.

Even the returning hero, Skirmishes, will have rewards as well though this is still under discussion. The goal is to give players who enjoy Skirmishes a chance for gear and Honor Points as well.

Much like the different ilvls of raiding gear based on the instance difficulty, PvPers will have three different sets of PvP gear. The team hopes to fix the ilvl gap issue with gear that can be purchased with Honor or Conquest Points with the three tier system.

There will be an introductory set of PvP gear similar to Dungeons or Looking for Raid gear. This gear will be quick and easy to get. It will come in those shiny new Strongbox rewards from doing Randoms and Call to Arms. And you have a very high change of getting this gear from the Strongboxes.

“Adding the Veteran’s tier accomplishes a lot of things for us. First, it helps make sure that someone who wants to step into rated PvP later on in the season isn’t nearly as far behind their opponents in gear. Second, since the basic gear is earned so quickly, that helps ensure players get those important set bonuses, trinkets, and so on without too much trouble, and helps put everyone on a decent baseline in their ability to compete. For players who enjoy PvP but aren’t really interested in jumping into rated competition, earning Veteran’s gear will feel a lot more rewarding.”

Gladiator’s Gear is the final tier (Heroic/Mythic) that is purchasable with Conquest Points. Unfortunately, how Conquests Points will be earned won’t be changing much after Season 15 except that Rated Battlegrounds and Arenas will have the same base Conquest cap. As usual, this cap can be increased based on the player’s highest rating in either Arenas or Rated Battlegrounds.

If you win a Rated Battleground, you will be rewarded with a bonus roll for Gladiator’s Gear instead of the Conquest Points. This bonus roll will work similarly to the open world Celestial bosses on the Timeless Isle (and let’s hope with a better chance since there will be no icky PvE gear mixed with PvP gear).

The new PvP central isle, Ashran, is the final major puzzle to the exciting changes for Player versus Player. But that information will be coming at a later date.

You can read more about the future of PvP over at Warcraft. And also: