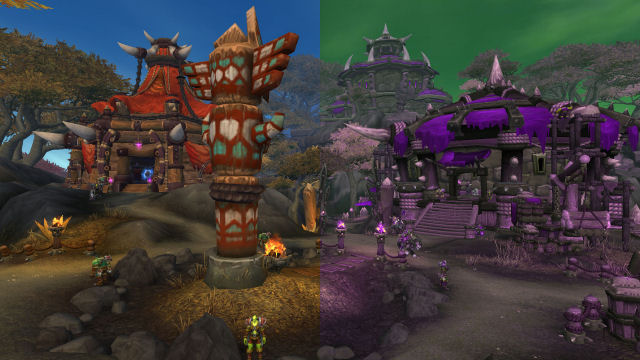 The improved Colorblind Mode Slider improves AbleGamers, but Blizzard Entertainment still behind for most.

Many features aren’t as glorified in changes when patch notes are data-mined from several fansites. Some require players to log into the Public Test Realm to discover subtle, but startling changes that could improve some of the gaming population’s quality of life.

The Colorblind Mode Slider is one such feature. This tool is an expanded feature to an option that was already existing in-game. But the original option was lacking in a very crucial aspect for those who have Colorblindness: graphics.

Currently live on World of Warcraft: Warlords of Draenor, the Colorblind Mode is a simple checkbox in the Help section of the Interface. It simply displays unit reactions (neutral, hostile, or friendly) and item qualities (uncommon, epic, etc.) in the tooltips. It’s extra text to be read!

On the Public Test Realm, the Colorblind has been moved from the Help section and added to a new field: Accessibility. Blizzard even made sure to tell those who had used it where it was newly moved.

And they went one step further. Most people assume that the world is black and white for those who are colorblind or that there is only one type. But in fact, there are three different types of colorblindness. 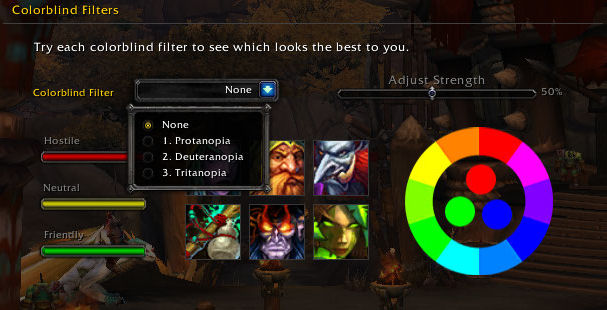 All three of them will be a filter option as well as a strength adjustment. The primary objective should be for those with colorblindness to be able to differentiate between the unit reactions on the left.

One Small Step For AbleGamers

This is but one small step forward for AbleGamers. Colorblindness, while not as debilitating as far as disabilities goes, can be problematic for players trying to avoid the bad in-game. And Warcraft is constantly trying to find new ways to grab players’ attention graphically.

This is where Blizzard Entertainment falls short in their progress to improve AbleGamers’ quality of life. In their attempts to visually snare notice for a harmful ability, they tend to go over the top. 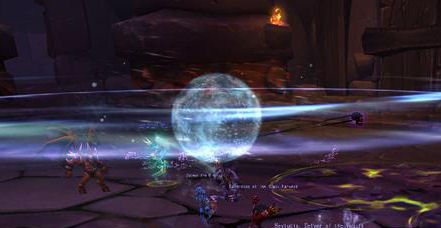 Several of these graphics have been known to trigger seizures, such as Ko’ragh’s Expel Magic: Frost or Hexos’s maze in Brawler’s Guild. Seizures can be prevented when the person knows what are triggers. But that means these players have to avoid several things in World of Warcraft. And that is not fun gameplay.

Blizzard Entertainment needs to increase their awareness for seizure-sensitive AbleGamers. Providing an option to remove pulsing or rapidly flashing graphics without it hindering the awareness required.

Again, the Colorblindness Mode Slider is an exciting step in the right direction for improving AbleGamers’ quality of life, but there is still a long way to go.