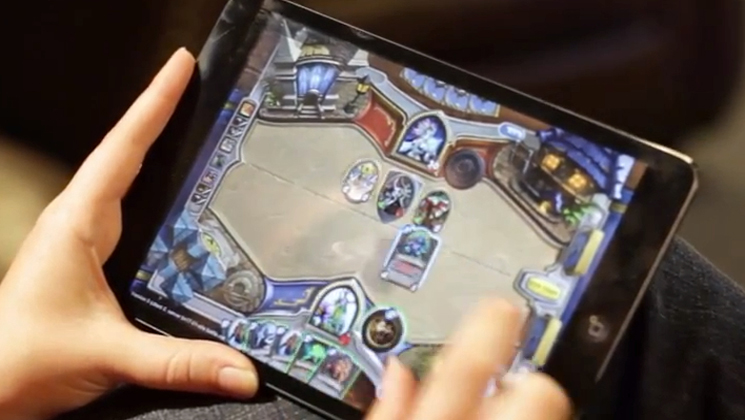 Internal testing for Hearthstone on the iPad is really happening.

We all saw the woman playing Hearthstone: Heroes of Warcraft™ on the iPad during the “What is Hearthstone?” video produced byBlizzard Entertainment. Not to mention it is covered in Hearthstone’s FAQ section about platform availability. So we’ve all been wondering how soon we might be able to start testing it out on the iOS.

What most have probably been worried about is if their card information will carry over between the platforms. Since the game is associated with your battle.net account, it is safe to assume that you’ll get to play your favorite deck on the go as well. Some players have been able to pick up their deck between Windows and Mac platform without issue, so it is a safe assumption.

When I was playing Order and Chaos Duels, you had to create a log in account with Gameloft. It did make it easier for you to purchase an extra character slot or card packs from their store, but it kept your information locked to that account.

And why would Hearthstone be any different? You can easily log into the Armory application on your mobile and do a few minimal tasks for your World of Warcraft characters such as auction house and guild chat and it doesn’t require a completely different character for your app only. The Hearthstone information will easily be saved on the Blizzard server for your accessibility on whatever platform you’ll pick.

Hearthstone On The Go

With the Blizzard employees starting to internally test, we’re that much closer to having Hearthstone on the go. Gross-factor incoming, but statically, people tend to play on their mobile games when they’re in the bathroom. So you’ll feel like a king as you knife juggle your way through a quick match on your porcelain throne.

The only issue I foresee with mobile Hearthstone is the always online factor, that we know of so far. You won’t be able to whittle the time away on a long plane trip. We know that airline wifi is not the best around while you’re flying 20,000 feet (or more) in the air. And if we’re able to play it on our mobile phone, that is just a bad idea all together.

So yes, be excited that Blizzard is that much closer to having iOS available for testing, but bare in mind that it will be “Blizzard soon™”. Are you looking forward to playing Hearthstone on your iPad? Should Blizzard look into an Android platform? Or will you just stick to desktop?