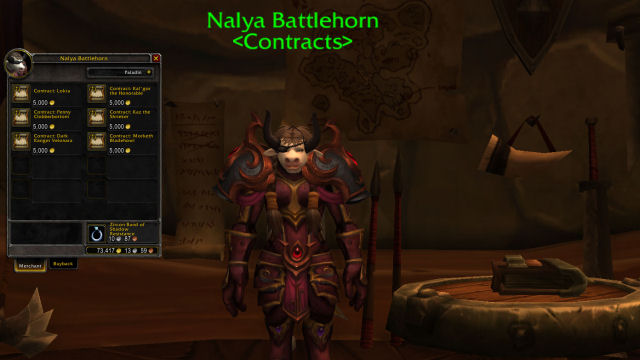 Garrison followers now bind on pick up, but will be purchasable in Warcraft Patch 6.1.

Followers are the very heart for Garrisons in World of Warcraft: Warlords of Draenor. Making sure that players pick the correct one can often be trying, especially when given an “or” option for rewards. These choices could mean early success when attempting to complete missions.

There’s nothing like making a crucial choice at the end of a lengthy quest line or picking your Outpost in other zones. Many Outpost decisions can be changed simply by spending 5,000 gold to switch. But some followers cannot be recruited since they were a choice reward from a quest.

Once Patch 6.1 is live, players will be able to purchase the contracts of all the followers they missed. This includes the other two choices from The Frost Wolves Stand Ready and Friends of the Exarchs from Warlords starting factional zones.

The cost to purchase each contract is equal to the cost it would take for players to switch the different zone. Some of these Outposts, such as the Lumbermill in Gorgrond, may reward two new followers. So it would be wise for most to go ahead and switch those Outposts.

However, if a follower contract is from a Mission and the player fails that mission, they follower won’t be lost forever and their contract will be available for purchase. This is a bit of forgiveness for those who have yet to install Garrison Mission Manager and Master Plan add-ons for the perfect success.

Between follower contracts going BOP and the unannounced release date for Patch 6.1, this leaves a very lengthy gap for players to appeal to their collection compulsions. But plenty of time to make those Outpost switches before it goes live to save on that in-game gold!