Seasons End in WoW as 6.0.2 Begins: Things to Bid Farewell in World of Warcraft 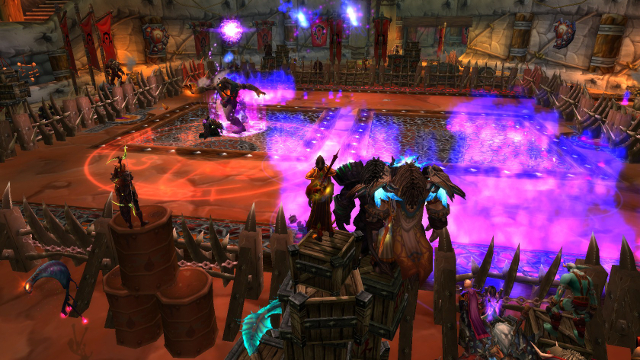 As Mists of Pandaria comes to a close, so does some of Warcraft’s content as well.

While Patch 6.0.2: The Iron Tide brings a lot of changes to World of Warcraft, it also brings an end to many things. All of what will be covered in this guide will be unobtainable or accessible until after Warlords of Draenorlaunches. This includes titles, mounts, pets, and more–prepare the goodbyes.

The final tier content for Mists will break away from the old Wrath of the Lich King raid set-up and prepare players for the new flexible system for Warlords.The new flexible system will allow the raid difficulty to adjust based on the number of players in the raid instead of needing a fixed number to defeat the bosses on Normal and Heroic difficulty.

Those who completed Siege of Orgrimmar prior to 6.0.2 will have earned an achievement “Ahead of the Curve”. Only Normal mode defeat of Garrosh Hellscream would earn players with a new mount, the Kor’kron War Wolf.

Along with the departure of Mists is the end of season for Challenge Modes. Challenge Modes were timed Heroic Dungeons with a cap on gear stats and item-level.

Players who earned at least Silver in Challenge Modes will have earned all the Pandaren Phoenixes–all mounts will be rewarded with 6.0.2. And those who reached Gold were able to pick up their class’s unique transmog-able gear. Guilds who played together up to Gold in Challenge Modes earned the Thundering Jade Serpent Battle Pet.

With the season for Challenge Modes at an end, that means access to Challenge Modes of Dungeons is also over. Mounts, gear, and pets cannot be earned after 6.0.2. Players who climbed their way to the top of the ladder will have earned themselves an illustrious title.

World of Warcraft is finally stepping away from the badge reward system for PvE. Valor and Justice Points will no longer be earned. Players who currently have Valor or Justice stocked up from over the last few weeks, will have it converted to the in-game gold currency.

Many items that were originally purchasable with Valor and Justice will now cost gold, except for Heirlooms. Heirlooms will be unobtainable until after Warlords launches.

All of the challengers in the Brawler’s Guild will also be taking a break until Warlords launches in November. None of the rewards will be going away, but anyone who earned achievements during Season 1 will have them moved to Feats of Strengths. Fret not about never earning the mount because Hexos barred your path.