The Siege of Orgrimmar Date Announced 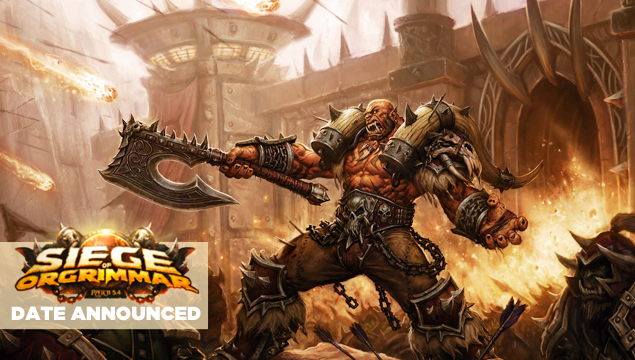 The date has officially been announce by Blizzard! The reign of tyranny is coming to an end!

Last week, Blizzard Entertainment announced that the World of Warcraft Season 13 will be ending on August 27th, 2013. We speculated that patch 5.4’s arrival would not be far behind. We threw our guesses into the loot (August 27th or Sept 3rd) and we weren’t too far off the mark!

Direct from Warcraft themselves as well as a handy guide in preparing for the Siege of Orgrimmar. That means you have a little under four weeks to get the last of the rebellion gear from Battlefield: Barrens on your alternate characters, the Vale of Eternal Blossoms will know sorrow from Garrosh’s thirst for power, and PvP Season 14 will be just around the corner!

Below are some of important changes coming in Patch 5.4

Currency Conversions
Justice and Valor won’t be converted in Patch 5.4, but with the PvP Season turnover, you can expect your Conquest to be converted to Honor as usual.

Please be aware that the conversion cost of Justice to Honor is going up, and it will cost 500 Justice to purchase 250 Honor.

Where’s the New Valor Gear?
There won’t be a new Valor Quartermaster come 5.4. Instead, we invite those of you intent on gearing up quickly to face Patch 5.4’s challenges to visit the new Timeless Isle. You can get a taste of what’s to come by reading Bashiok’s Timeless Isle preview.

The Ethereals who offer Item Upgrades are sticking around, so you’ll still be able to spend your Valor on upgrading your existing gear.

New Arena System
Big, big changes are coming to how Arenas are organized in Patch 5.4. The most important part is that players will no longer need to create or join an Arena team to compete. Similar to the Rated Battleground system, players in a party of the appropriate size (even cross-realm!) can queue for an Arena bracket of the same size as their party (2v2, 3v3, or 5v5).

For the details regarding how Arenas work in 5.4, check out Daxxarri’s blog on the subject: Patch 5.4 Arena Update.

Make sure to say your good-byes to the Golden Lotus as the Sha of Pride takes out the Vale’s defenders, as well as to the Darkspear Rebellion. Time grows short!