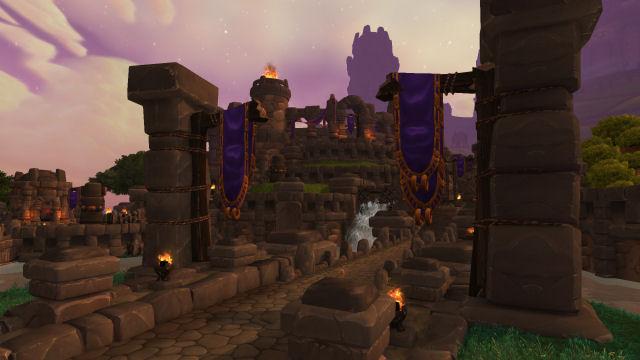 The first wing of Raid Finder Highmaul is now live in Warlords of Draenor.

The Walled City of Highmaul will not be prepared as World of Warcraft players storm within. The first wing is available for players to experience the PvE side of Warlords of Draenor thanks to Raid Finder (LFR) tool that was introduced towards the conclusion of Cataclsym Patch 4.3.

Raid Finder is a handy tool perfect for the raider who just can’t consistently raid, doesn’t desire too much of challenge, or just wants to see the current content of Warlords. To get into the available wing of Highmaul, players will need to have a gear level of 615+ to queue.

One thing that will be significantly different about Raid Finder this season is the missing Raid Tier tokens. Players who venture into Highmaul through the Looking for Raid tool will discover that no tokens will drop at all. Currently, Highmaul Normal, Heroic, and Mythic will not have any Tier drops.

But Raid Finder won’t have any Tier items even after Blackrock Foundry opens which is where Tier 17 will drop. Fear not, adventurers! While Tier may be gone for Raid Finder, there will still be set bonus items available in a later instance.

Inside the Walled City

Highmaul will be broken up into three bite-sized wings–Walled City, Arcane Sanctum, and Imperator’s Rise. The Walled City includes the first three bosses, Kargath Bladefist, The Butcher (not to be confused with Diablo III‘s Butcher), and Brackenspore.

To learn about about the individual mechanics for these bosses, check out Your 15-Minute Guide to Highmaul Bosses. Here will just break down the differences for Raid Finder.

Organizing so three damage dealers and one healer will be pushed into the stands during Kargath’s Chain Hurl in Raid Finder would not be an easy task. Instead, Chain Hurl will randomly choose these players ensuring that there will always be the required people in the stands.

Once in the stands, the adds there will deal significantly less damage. Those who are hurled there will need to focus on killing as many of these spectators as possible without dying.

Those who remain on the ground will also have one less creature to worry about, the Tiger Pits. These will remain securely locked so the big cats can get some well deserved rest before facing others in Normal, Heroic, or Mythic difficulty.

Again, organization is not Raid Finder’s strong suit, but the Butcher may require a bit more strategy. While his Cleave ability will cause Gushing Wounds, this can reach 9 stacks before instantly killing a player instead of 5. Thankfully, it is almost impossible to exceed 8 stacks of Gushing Wounds until he hits 30% health which triggers Frenzy.

So it is best for players in Raid Finder to still split into two groups to soak up Cleave. There is no need for any players to trigger his Cleave attack as he will randomly choose between the two groups, and still unlikely for those groups to hit 9 stacks of Gushing Wounds.

For healing management, four to five players should be enough to split the damage. Players with Gushing Wounds should also make sure they don’t stand with the ranged group during knockback or they might tip over to 9 stacks accidentally.

This boss in the only one in the Walled City who will not have any mechanic changes made specifically for Raid Finder difficulty and will be more challenging. He will require target prioritizing and a lot of movement.

Healers will have a chance to shine as they will be called to heal beneficial mushrooms to activate their effects. At least two damage dealers will need to play with fire against creeping moss, while the rest slowly but surely takes down Brackenspore and his friends.

One of the biggest concerns about Raid Finder are the problem players that seem to appear to ruin others’ fun. Don’t worry, they’re still around, but the Raid Finder content has been “dumbed down” to where it is on par with Normal Dungeon difficulty.

Keeping in mind these few tricks should help ensure a victory even later in the weekly reset. We’ll see how the next wing of Raid Finder holds out with difficulty and changes.