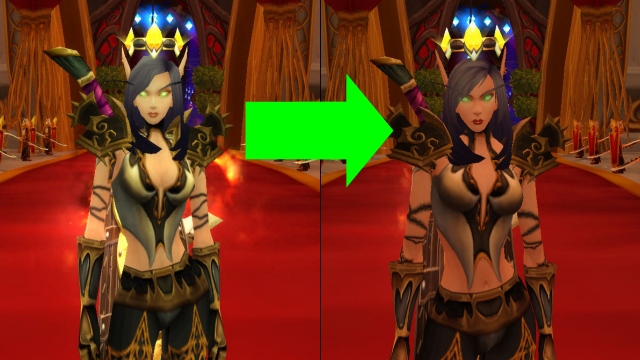 An early iteration of Blood Elf character models is currently available on PTR!

World of Warcraft players have been anxiously awaiting to see how their Blood Elf characters will appear with the new updated models. Those who favored the Blood Elf race didn’t experience the excitement like their fellow players when the other races were updated for Warlords of Draenor. But back in November, the art team share a sneak peek at both the male and female models.

With PTR build 19508 now available, the Blood Elves are finally available for players to check out. But there’s already several disclaimers to include with this early update thanks to Quality Assurance Analyst “Zorbrix” on the PTR 6.1 Discussion Forums:

Right now, the new models are more or less using the same facial geometry set – as in, all the males will have the same chin, eye shape, nose shape, etc. These are currently slated to be added to the models in an upcoming 6.1 build.

For more information on what Facial Geometry Sets are, refer to the Artcraft posted last year. Please keep in mind that these different customization options are not yet complete when providing your feedback on the new models.

The first thing most will notice is that the Blood Elves no longer have their own personal glow. The unnatural lighting surrounding them is gone so that the environment will finally be their light source. This is really noticeable with the paler skin tone for race.

The felfire in their eyes is not a haze that covers their eyes. That fel-corruption is no longer like flashlights from their eyes; their irises are now visible. Only a few of the older faces actually showed that the actual outline for their eyes.

And their hair! It actually looks more like hair and less like a blob of pixels tossed on top of their heads. There’s feathering, more natural separation of locks, and finally lowlights and highlights. And that includes eyelashes!

This is a new issue that’s appeared with just the female Blood Elves, the double blink. Not exactly sure where this new animation came from, but it was originally part of the male’s idle animation. Now the female does it as well for hers and it’s quite obnoxious. It isn’t even in a flirtation manner. She’s just staring blankly ahead and double blinks.

There’s also a change to the male’s cast animation. Instead of manically casting his spell, he now smugly stands there. It’s possible that this animation hasn’t been finished quite yet, but it is a shame if that is now gone.

While this is an issue that’s been present even with the old models for Blood Elves, some would still like for the exaggerated curve of the spine and posture to be relaxed. The idea is that of a fashion model, but it’s over the top.

The male still has his over exaggerated, labored breathing, but that could be due to the extreme sway in his back he learned from the Draenei females. Both his diaphragm and his chest roll with each breath like the waves of the ocean.

And the female is already likened to a stick figure, but this is even more evident with her upper arms. Checking through a few of the other races, there’s something that’s missing from the female Blood Elf: shading. Her upper arm lacks the shading to give her arms more definition, especially when she flexes in her skivvies. 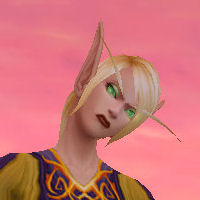 And anatomy went out the window for the female’s head tilt idling. Watching her attempt to touch her ear to her shoulder causes neck pain and spasms. Again, over exaggerated like many of the issues for the Blood Elves.

Again, the Blood Elf models are currently on PTR. Several of these issues have already been shared with in a Feedback thread specifically designed for them. And like the other races, they’ll be corrected with the appropriate, constructive feedback.