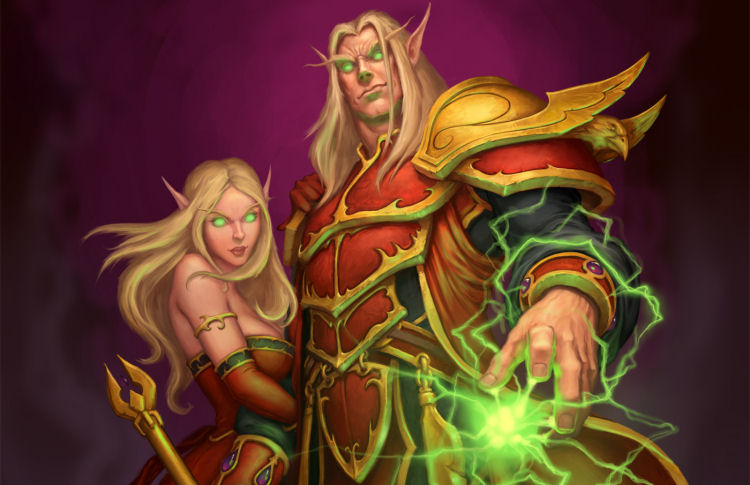 After the latest Artcraft, many in the World of Warcraft community expressed an interest in the final Burning Crusade race–the Blood Elves. Before BlizzCon, players had been informed that only the Classic races would receive a character model update. So far, players have seen both genders for Forsaken, Orc, Tauren, Human, Dwarf, Gnome, and female Night Elf.

It was during BlizzCon 2013 that fans were surprised that the Draenei and Blood Elves would be included for upgrades. And the art team has delivered with the new Draenei models. But as stated, many have been wondering about the Blood Elves and if they would get to see a preview of them before Warlords of Draenor launch.

Senior Art Director Chris Robinson explained on twitter that the Blood Elf models are indeed being worked on, but that they will not be available for the launch of Warlords of Draenor. It wouldn’t be fair to include a still-in-progress and sub-par character model when all the others are complete.

Since that time it has become apparent that Blood Elves will not be up to par for launch. I sincerely apologize for setting that expectation

We are working hard to complete the models and get them in-game, but that won't happen until sometime post WoD launch.

This, unfortunately, has caused a lot of outrage within the Warcraft community. The Blood Elf fans are upset that the Draenei have received their upgrade, but that they will have to wait until sometime after launch. Especially after the following tweet:

to clarify- mentioned a while back that BC races would be included with initial batch. Draenei are prolific in WoD so we started with them

Warlords isn’t going to be like Outlands during the Crusade. This world isn’t blown up with Orcs, Draenei, Blood Elves, and Demons fighting for control. It is the homeland to the Orcs and refuge to the Draenei. Hence it makes sense that the Draenei had received their upgrades before their counterparts, the Blood Elves.

Again, Draenor is the refuge for the Draenei and home for the Orcs. There is only one Blood Elf non-playable character who is joining Horde heroes in Warlords, Lady Liadrin. She is the leader for the Blood Knights, wielders of the Light, who will help the Draenei defend their sacred precincts.

During BlizzCon, it was stated that the character model upgrades could be implemented over the course of the expansion, new models added per-patch. As players have noticed, the art team has been working very diligently to get as many races upgraded before then. And now we know that all but the Blood Elves will be ready for launch.

Warning: Opinion incoming! Take the following with a grain or a truck-full load of salt. There are only three character models that have not been revealed yet. Even though the Blood Elves have their own silhouette, they were originally part of the Kaldori society. It is possible that the team is waiting to finish up the male Night Elf. There may still need to be some visible characteristics that are associated between the two.

The End In Sight

There’s just a few more races left to be revealed. Vaneras on the forums has been excited over the Troll models. And they are coming hopefully in the next week or two!

Trolls will be in at launch, Troll Artcraft coming up either next week or the week after.

I just want to say:

Thank you for working so hard on upgrading all the races. This project could have been done throughout Warlords of Draenor expansion, but you are delivering excitement to the game with new models.