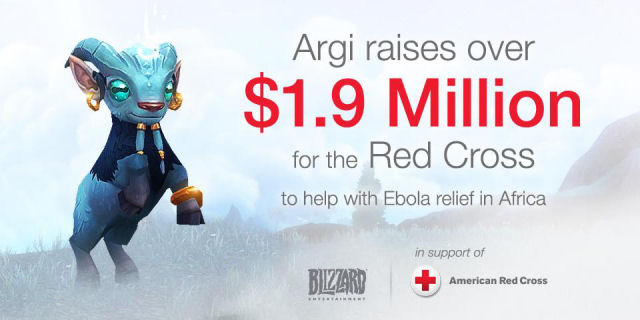 Almost $2million raised for Red Cross and Ebola relief thanks to World of Warcraft players!

From December 4th to December 31st, 2014, World of Warcraft players were able to raise almost $2million for Red Cross’s Ebola relief efforts! And it was all thanks to purchases made to adopt a little space goat ($10 in the US; pricing varies by region), Argi.

Thanks to the overwhelming generosity of World of Warcraft players around the world who purchased the Argi pet, we’ve raised a total of more than 1.9 million USD to support the ongoing Ebola relief efforts in Africa by the Red Cross. In December, we announced that for every Argi purchased by December 31, 2014, 100% of the adoption fee would be going to assist in aiding in the fight against this deadly disease — and the community embraced this cute little intergalactic nibbler, helping out a great cause in the process. Thanks again to everyone who helped make a difference.

Perhaps what made this such a huge milestone in fundraising is the simple fact that 100% of the adoption fee went to Red Cross. Previous pets had only 50% of their earnings donated to each charity they were representing.

Since Blizzard Entertainment began selling vanity pets for charitable causes, the community has since raised almost $7million. It just goes to show the real power of positivity within the gaming community when aimed for good. And when the Warcraft community comes together, players can make pretty amazing things happen.