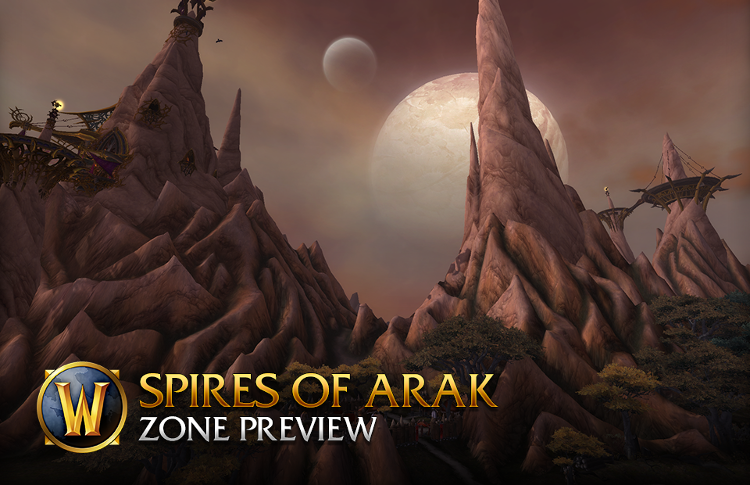 High reaches revealed in the Warlords Zone Preview for Spires of Arak.

Two Warlords of Draenor Zone Previews in one week! Tuesday revealed the nostolgic area of Nagrand. The most recent Zone Preview shows off the artist endevor of the Spires of Arak. The concept art took many BlizzCon goer’s breath-away, thus why it is one of the last zones to be shared.

Located in the southernmost part of Draenor, the Spires of Arak is a zone of soaring heights and shadow-drenched crags—but as with much of the planet, the beauty of this place hides something sinister.

The Spires of Arak is not present after Draenor since it was blown off when the planet was ripped apart, so this zone will be completely new to many veteran World of Warcraft players. Only a few fragments remain as floating islands and sparce mountains around Terokkar Forest.

This area is the primary home for the Arakkoa, who rule from the peaks of Skyreach. These highly intelligent bird-like humanoids are different from those seen during The Burning Crusade. Players will finally be able learn more about them and see their struggle as they come to cross-road in their future to becoming corrupt and evil.

Aside from the Arakkoa, the Spires is also the territory for the Shattered Hand Clan. They are flexing their power and strength against all who oppose them and the Iron Horde.

The Spires of Arak was previously featured in an Artcraft and it looks like the team was able to nail the concept art superbly. Players will first be greeted by tall mountains, large boulders suspended by thorny vines, paths cut between them all.

Both Horde and Alliance will need to make a stand against the Shattered Hand and aid the outcasts of the lands. Players will experience many new memories in the Spires of Arak.