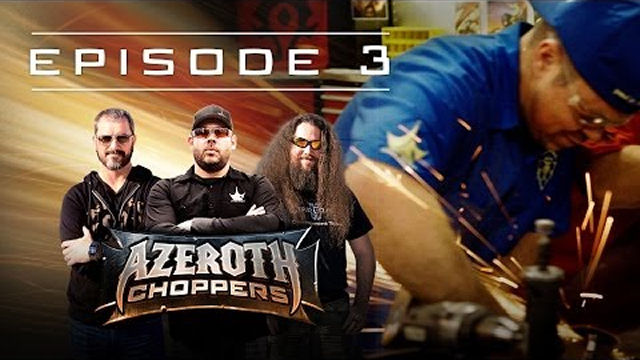 It’s time for a progress update on Azeorth Choppers and the developers are in for a shock!

Episode 3 of Azeroth Choppers introduces some of the “lesser known” team members of World of Warcraft andBlizzard Entertainment. This episode, the developers are in for a surprise of their own during the first progress call. The Alliance and Horde teams face different challenges.

Monte Krol is a Lead Software Engineer who’s even done some writing and voice acting for Warcraft III and World of Warcraft—you might know him as the voice of the goblin saying “Time is money, friend!” Monte’s also hardcore into 3D printing, and recently printed a working six-speed transmission.

Terran Gregory is an Associate Project Director, dedicated Gnome enthusiast, and filmmaker who lives and dies for the Alliance. Terran is a huge World of Warcraft lore nerd who was the player behind Kyle’s mage in South Park’s “Make Love, Not Warcraft” episode. Some of his cinematic work includes Return, Billy Maclure,  5.4 The Siege of Orgrimmar trailer and the introduction to Azeroth Choppers.

Gary Platner is a Lead Environment Artist and former stand-up comic (he even got paid once!) who’s been training in Krav Maga for about four years. He loves training, sparring, and getting kicked in the head by his fellow students.

Jason Hutchins is a Senior Game Producer who’s living the dream. He married his high school sweetheart and enjoys the finer things in life: cars, cocktails, guns, motorcycles, and food . . . though not in that order and never all at once.

Team Horde might be a little bit on the heavy side this episode, but it gets taken down a notch as trouble begins to brew.

Team Alliance starts off behind as a key component is missing to progress, but they get back on task only for more complications to hamper on the design.

And it is first progress call between Paul Jr. Designs and World of Warcraft development team to see how the motorcycles are coming along. Find out if the dilemma is fixed in time to show them off!