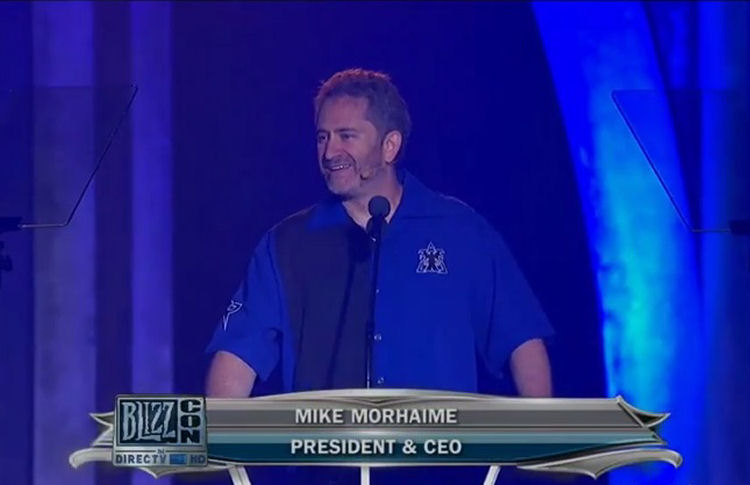 Blizzard fan reaches out to Mike Morhaime! His response may restore lost faith in company.

Blizzard Entertainment has made its fair share of these mistakes. Female characters in many of Blizzard Entertainment’s games have enacted in the typical troupes–eye candy, weak, manipulative, invisible–and those of other ethnicity have played the chaotic neutral to down right villainous.

During the 70s to early 2000s, scantily clad Dungeons and Dragons characters were on the cover of Player Handbooks, women were depicted as helpless damsels in distress, and men were mighty. Many console games rarely had females taking an active role.

Many of Blizzard’s developers grew up or were game designing during that time. So it’s definitely a very hard habit for many to break–especially so for those of the male gender. Those who have a plethora of character designs catered to them don’t exactly notice what is being neglected and it takes outside sources who are part of those groups to draw the attention. Once they are aware of those issues, its like a third eye opens for them to see them.

Drawing Attention To These Issues

Many Warcraft players have taken to the official forums and comment sections about their concerns over the many mistakes by the company. At times, it seems that the team over at Blizzard Entertainment aren’t listening–especially when those same mistakes are repeated often.

That’s why one member (they wish to be called starcunning) of the Warcraft community decided to step up the ladder of command by sending a letter to President and Co-Founder of Blizzard Entertainment, Mike Morhaime.

When Blizzard’s emphasis is on engaging gameplay over engaging story, it’s easy to dismiss these concerns as unimportant or even to see them as a political or social issue. What Pardo and Browder fail to recognize is that by not acknowledging these issues, they are in fact sending a message: that somehow, including a wider variety of portrayals of women or incorporating diversity in other aspects is politicizing their game. I don’t think that’s true. I certainly don’t believe it’s truer than the notion that excluding these groups doesn’t send a message.

Starcunning goes on to explain how Blizzard has missed the mark with engaging story. Character development has been ignored for many different NPCs until they are thrust back into the lime light–save a few such as Garrosh Hellscream–and story has been bounding around like a child on a sugar rush since the conclusion of The Wrath of the Lich King.

Gaming in general—and Blizzard Entertainment in specific—would be well served in the pursuit of retaining a diversified base by diversifying their development and writing team. Games development seems to be like a walled garden, tended by groundskeepers who come overwhelmingly from the same background. When asked why Blizzard didn’t hire more women, Mr. Pardo responded “I just don’t get the applications.”

Larger, older companies honestly are intimidating and many diverse applicants are lost among the multitudes who have applied to them. What developers see are what the recruiters pass on to them after picking the best possible batch of candidates. Which is probably why few developers see these diversities and thus it appears that the same background employees are hired.

But can a company truly listen and take to heart such a strong and honest letter? Many would believe that even the president wouldn’t have the time to respond to such a plea.

Since this is Blizzard Entertainment, it is no surprise that Morhaime did take the time to reply to Starcunning. But what was said in the e-mail gave new hope for many of their fans.

Morhaime did not make any excuse for the mistakes that employees have committed in the past and went on to say that they are working on improving.

There have been times when we’ve been seen or painted as being uninterested in hearing feedback or making changes. I want to be clear that this goes against the philosophies and core values on which Blizzard has been built and continues to operate. We will always listen, and we will always work hard to make games that appeal to as many people as possible.

[…] And we know that actions speak louder than words, so we are challenging ourselves to draw from more diverse voices within and outside of the company and create more diverse heroes and content. We are also actively looking at our story development and other processes to ensure that our values are fully represented. We’ve always believed that positive, lasting change comes from examination, discussion, and iteration, and this applies as much to story as to gameplay. There is no reason why inclusivity should come at the expense of an amazing game experience.

I speak for everyone at Blizzard when I say that we will always remain open to feedback and discussions to help us improve. This will be an ongoing process for us—it’s likely that we will make mistakes again in the future, but we will continue to listen, learn, and grow. We care very much about what you think and what you’re getting out of our games, and we’re committed to reflecting our core values in our words as well as our actions.

What is honestly great about this e-mail exchange is that it was done in a civil manner. Starcunning was capable of giving constructive feedback on their experience with Blizzard games without tossing expletives and using their game removal as a threat. Instead, they explained why they had.

Starcunning’s e-mail was effective in defining a goal for Blizzard’s new standards and to hopefully restore faith in the company’s future for epic game content.

Remember that game companies survive because of their player base and more is accomplished with constructive feedback.

Hopefully, players will see more action in future builds with Warlords of Draenor and Blizzard’s other franchises.