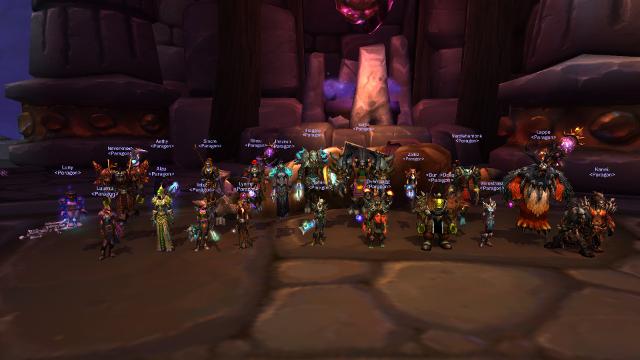 Highmaul World First is complete, but it came with a lot of controversy.

The World First race for Warlords of Draenor Highmaul is over. The winners of the first raid released for Tier 17 is Paragon! But their win caused a small bit of controversy that they are all too familiar experiencing.

It’s been a few expansion since we’ve seen them dominate the races after announcing their switch from 25man to 10man for Mists of Pandaria. During that time, there was a huge debate on which raid size should be counted for the World First races based on difficulty.

As explained in How to Mythic Highmaul – the Race to World First Begins, balancing between the two raid sizes was problematic. Thus the single raid size for Mythic to replace Heroic for Warlords. Which is probably why many familiar names made a return for the current Tier race.

At the time of the kill, five other guilds were already 6/7 while Paragon was trying their hand with Mar’gok. Unlike their fellow racers in the lead, they were still having issues with the Butcher, leaving them at 5/7.

The Warcraft players held their breath as they waited for either Paragon to defeat Butcher or for one of the top five to claim World Second. This was reminiscent to the Tier 11 race when Bastion of Twilight, Blackwing Descent, and Throne of the Four Winds were released ungated.

Each instance had its own end-boss to defeat, but the one that had many scrambling was the unique added boss for Bastion of Twilight–Sinestra. Again, the debate on a “true” World First came up as the winners then hadn’t finished one of the end bosses in another raid of Tier 11.

Highmaul was a new issue since three of the bosses within the instance could be skipped and considered optional by many. Warcraft players haven’t seen this kind of option for defeating bosses since Tier 8, Ulduar. Ulduar was a whole different World First Race when heroic mode was first introduced.

World of Warcraft raiding has evolved since its first introduction. It has shrunk in size while growing in difficulty. And each change has brought a new “rule” to the World First Race. Each instance mentioned caused more controversy that was unnecessary because players want to assign “Gentleman Rules”.

With the current race, the debate was whether or not it was fair for a guild that hadn’t defeated all previous bosses should be counted as World First. Paragon had 5/7 bosses defeated before they downed Imperator Mar’gok.

It isn’t neccessarily fair to hold such things accountable when the instance was designed specifically for some bosses to be skippable. Blizzard Entertainment set up this loophole themselves. The progression through Highmaul wasn’t linear in design at all.

If there was a requirement for all bosses to be defeated to open the main door against Imperator Mar’gok, this “breaking of rules” won’t have even been an issue. But they were optional and it shouldn’t be held against Paragon for downing the final boss before any of the 6/7 guilds.

Luckily, Paragon was successful in killing the Butcher before any of the other 6/7 guilds got World Second. Taking him down meant that they got a World First in clearing all of Highmaul.

Do you agree that all bosses should be cleared before a final boss for a “clean” race? Or does the order in bosses are killed, especially for optional ones, not matter?