Conspiracy Craft: The Beginning Of The Time Wars 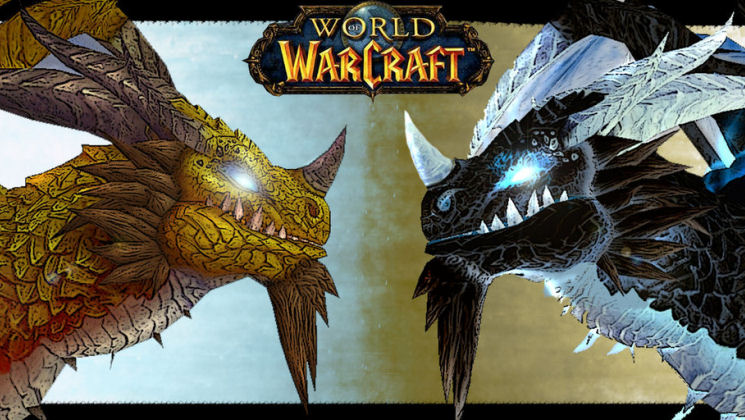 The beginning of the Time Wars at the end of Warlords of Draenor. Conspiracy Craft goes all wibbly wobbly timey wimey again in World of Warcraft.

Players in World of Warcraft will be focused on hunting down Garrosh Hellscream and stopping the Iron Horde. But Time Travel In Warlords Of Draenor revealed that there is something bigger at work which was hinted at BlizzCon. Meaning that the Orcs are a diversion away from the true villain.

As stated, the real threat to Azeroth will be the fact that the red Dark Portal is connecting the true timeline to a corrupted past. And in light of the upcoming novel, War Crimes, theBronze Flight will be using their unique powers to show the defendant’s transgressions. Because of that, we know Garrosh’s abettor, Kairozdormu, will be close at hand. What is about to unfold in Warlords of Draenor will be the beginning to a future war.

Based on what was said during BlizzCon, Garrosh will escape before the verdict is read. With the help of his friend, he will jump to a time way stopping the Orcs drink the corruption of Mannoroth and thus distort that timeline. But there is only one place in Azeroth where that is possible.

In the Caverns with the Lance

The Caverns of Time is the only location on Azeroth that seems set outside of time itself, not to mention being one of the homes of the Bronze Flight. Before, no mortals were allowed inside for fear they might be tempted to tamper with the natural order. But when the timeways seem to be threatened by an unknown entity, later revealed as the Infinite Flight, the call was sent for it to be opened for aid to protect and correct the damage.

“The timeways are no longer our concern! They are beyond my ability to control. From here on, the younger races and the younger races alone will deal with both them and whatever paths to the future they lead to.” (Nozdormu; Dawn of the Aspects)

Since the infiltration, the Caverns has been heavily guarded by the Keepers of Time, now known as the Timewalkers. Aside from helping Garrosh escape and flee back in Orc history, Kairozdormu has been instructed to connect the two timelines together. Those actions reflect the same intent as the Infinite Flight and would instantly raise the alarms. And the first to arrive on site would have to be taken out to cover the identity of the culprit.

Despite the fact that Soridormi could be the first on the scene, her future death seems more premeditated and Kairozdormu will be compelled to repeat what was seen in the Vision of Time. The loss of a mate has sent two of the Aspects reeling in the past. Taking out the Prime Consort would hit home for Nozdormu.

When Alexstrasza lost Korialstrasz, she ran away with her grief, shutting the world out. It was through Thrall’s determination and compassion that he was able to share the final act of her mate in a vision. It was with that knowledge that was able to save her.

But cold-blooded killing has a way of shaking even the firmest of foundations. Malygos experienced that close at hand, but he experienced the loss of his entire flight, not just his mate, and he spiraled into madness. Even when his eggs were saved and returned to him many years later, his hysteria did not dissipate.

And I fear that it could be the familiar path for the former Aspect of Time. Currently, Soridormi is the only known mate of Nozdormu. Even if he does have other mates, he could possibly lose them as well if they refuse to convert.

Nozdormu certainly doesn’t seem the type to share his feelings (although his personality is hard to figure between his infrequent appearances). He has fallen to apathy and been lost in the flow of time before. He could easily hole away again in his grief and the knowledge that there is no way for him to turn the clocks and either save her or say good-bye will be the start to his mental breakdown.

He would then be tempted to have that lost power again same as other beings who call one of many, Master. The very dark forces he discovered after the Cataclysm, the Old Gods, to have tampered with time. And having lost such a tantalizing power could cause anyone to long for it back. And as Nozdormu has said before, even he will fall to madness and become the Lord of the Infinite.

“At last it has come to pass. The moment of my demise. The loop is closed. My future self will cause no more harm. Still, in time, I will… fall to madness. And you, heroes… will vanquish me. The cycle will repeat. So it goes.” (Nozdormu; End Time)

The First Battle of Many

Although we have “defeated” Murozond already at End Time in Cataclysm, eventually players will have to face him once again. A point was raised that upon defeating Deathwing when players did, they re-wrote the very future of Azeroth and restored the true timeline. If that future never happened, it could mean that Murozond will have to be defeated again.

Yes, our time is safe from the tampering of his Infinite-self, but the cycle will repeat. After all, there is no way that Murozond could be defeated as a simple 5-man end boss. I suspect that players’ future selves will have weakened him with the aid of nine or more allies so he will flee to End Time where they cannot follow.

But before players have a chance to witness the changing of Nozdormu, they must first take out the “first” corrupter: Kairozdormu. His death at the end of Warlords of Draenor will be like the first shots fired in any historical war. The end of war between humans and orcs and the beginning to the Time Wars.