The Burdens of Shaohao Review 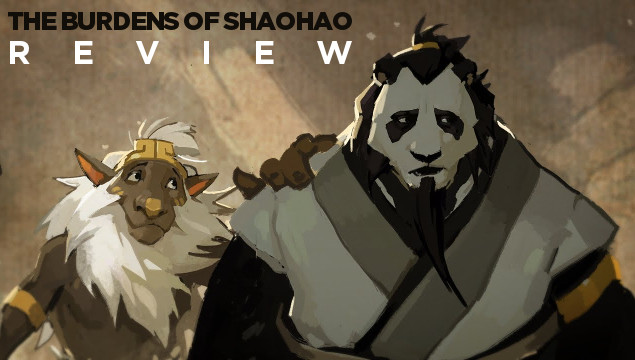 “In a new series of six dramatic shorts, we travel back to the time of the last Pandaren Emperor, a golden age before the land was enveloped by mist.”

Last week Blizzard Entertainment‘s World of Warcraft tried a new format for sharing the lore of Pandaria in a series of six dramatic shorts, The Burdens of Shaohao. Narrated by the talented voice of Lorewalker Cho (Jim Cummings) and artistically depicted by Laurel Austin, this amazing story takes life before your very eyes. And you can enjoy it in its entirety on Warcraft’s YouTube channel!

The story of the Last Emperor is what shaped the Pandaren into what they are today, through his selfless example they strive to reach inner peace within themselves. And you would too living on a land with hostile entities that could consume you with the very negative emotions you may feel. Even the most beautiful can be the most dangerous and deadly.

Emperor Shaohao is told of a foreboding future not only for himself, but for his people and all of Azeroth. Seeking to find a way to protect his land and his people, he journeys across Pandaria with his trust friend, the Monkey King. But seeking counsel with the first Celestial does not enlighten him much and he must face his darker thoughts before he can become the heart of Pandaria.

“Art washes away from the soul the dust of everyday life.” 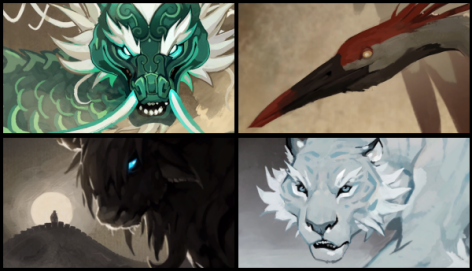 While Pandaria’s architecture is more along the lines of the Chinese in our world, the artistic choice appears to be more rooted in the Japanese style. But the black outlining style from the Prelude’s water did not continue in the rest of the shorts and instead Laurel opted for the softer, dark shade of the same color outlining. What was present through all shorts was the parallax technique where each layer had a sense of movement and the more natural color choices rather than the vibrant palette in-game.

Overall, it was visually pleasing and conveyed wonderful emotion. It reminded me of when I was in high school and seeing a marathon of Samurai Jack on Cartoon Network. The continuing flow using a few simple brush strokes symbolizing water, air, or lightning, it was almost like seeing sand art and how that flows and grows to telling the story with simple projection. But you have to have the right music to express the emotion of the story just as well.

“Music is the soul what words are to the mind.”

The use of the iconic soundtracks from the game itself helps concrete the connection in the franchise. The audio team (I wish there had been credits for them) did an excellent job deciding which sounds to place with the art and when to choose silence. Even the use of ambient sound didn’t go unnoticed and helped draw the viewer into the story, such as the trickling sound of water or the crackling of fire.

I loved how signifying a single gong or even the ringing of a bell could mean so much at the right point. And the blending, ebb, and flow of the music through transitions, if this was music from all of Warcraft’s history, was put together very well. Nothing sounded out of place.

Even the music they picked for each part matched the theme of the different Sha that Shaohao had to face. When despair filled the Emperor, the music made the listener feel the sorrow. And once he ventured into the fearful territory of the Mantid, the chilling sounds of the strings caused apprehension of terror to be in the story.

It’s a wonderful story to have been picked for this format. If you haven’t explored Pandaria and found the eight scrolls scattered about for The Seven Burdens of Shaohao, you are seriously missing out! As stated earlier, the Last Emperor was the foundation to what the Pandaren are in-game today. He faced six of the seven Sha to find inner peace to protect his people from the Sundering when the Well of Eternity imploded. But the series wasn’t a perfect replica of the story in-game.

According to the scrolls in-game, the Monkey King was with Shaohao while he journeyed across Pandaria seeking the counsel of the four Celestials after the revelation with a Waterspeaker. The Monkey King was there to help draw out the negative emotions within his friend by carving masks. This was later repeated in a quest chain in Krasarang Wilds with Ken-Ken as he asks players to Apply Directly to the Forehead masks to draw out despair at Zhu’s Watch. 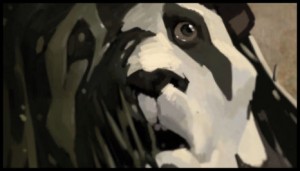 But storytelling is all up to interpretation. The masks were still present in the visual art. As each Sha tried to pull him down into his negative emotions, they took on a minor aspect of his own face with theirs. And though the battles didn’t rage for a long duration in time and there was no burying of the Sha depicted, it was focused on the lessons to be learned.

This series in no way detracts from the entire story of Mists of Pandaria. If anything, it enhances it. These short videos were well targeted, particularly at those who haven’t taken that extra time in-game. It gave the important parts of the story in a new and attention grabbing way. And it also managed to catch the attention of some inexperienced with Warcraft.

I will definitely be re-watching this series when I need reminding of the lessons from Shaohao. I certainly look forward to more, smaller bits of Warcraft’s immense lore being shared in this format.